Paralympian: ‘There is life after an injury’ 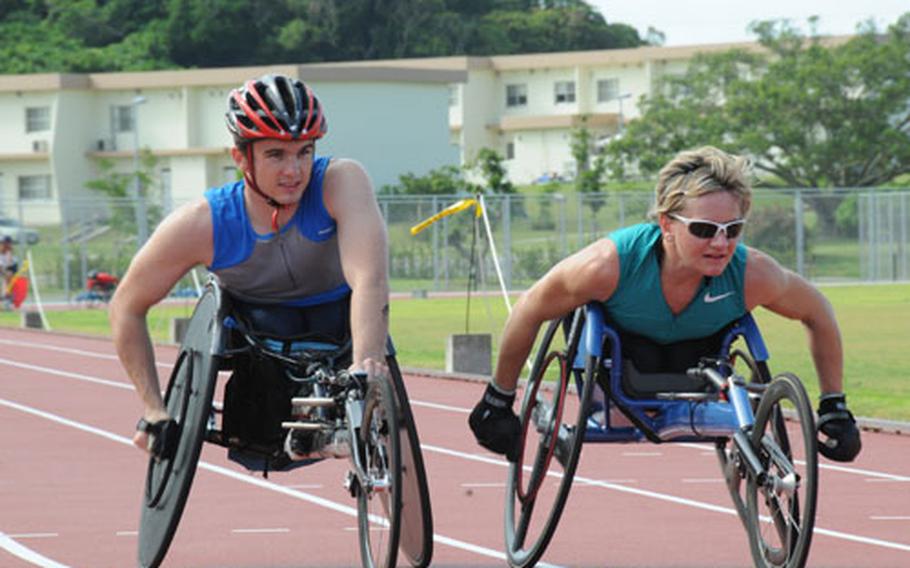 U.S. Paralympic athletes Tyler Byers, 26, from Spokane, Wash., and Cheri Blauwet, 28, from Larchwood, Iowa, train at the Ryukyu Middle School track on Kadena Air Base on Wednesday. The U.S. Paralympic swim and track teams arrived on Okinawa on Sunday to prepare for the Paralympic Games, which begin Sept. 6 in Beijing. (Photo by Cindy Fisher/S&S)

U.S. Paralympic athletes Tyler Byers, 26, from Spokane, Wash., and Cheri Blauwet, 28, from Larchwood, Iowa, train at the Ryukyu Middle School track on Kadena Air Base on Wednesday. The U.S. Paralympic swim and track teams arrived on Okinawa on Sunday to prepare for the Paralympic Games, which begin Sept. 6 in Beijing. (Photo by Cindy Fisher/S&S) 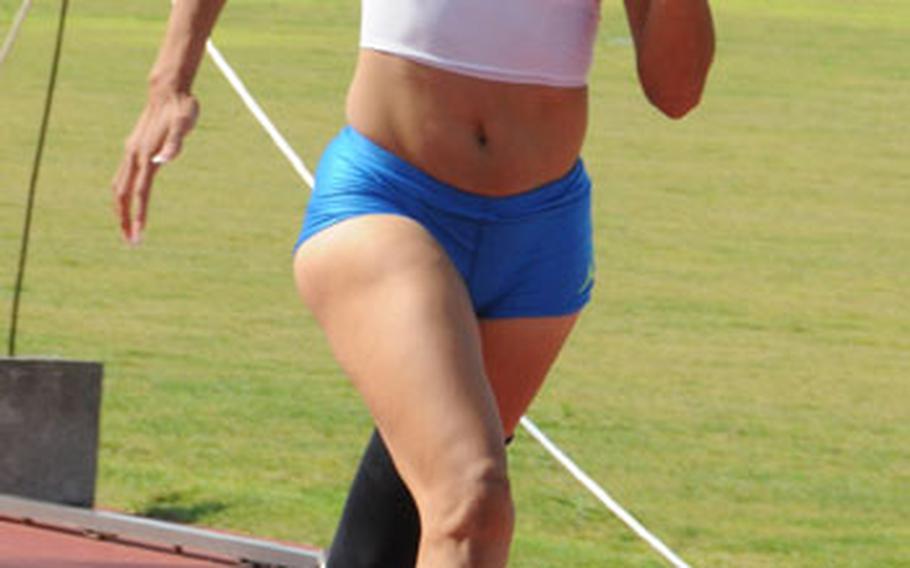 U.S Paralympic athlete April Holmes, 35, from Chula Vista, Calif., runs down the track at Ryukyu Middle School on Kadena Air Base during a training session Thursday. Holmes, a below the knee amputee, holds the world record for the women&#39;s T44 classification 100-, 200- and 400-meter dash. (Photo by Cindy Fisher/S&S) 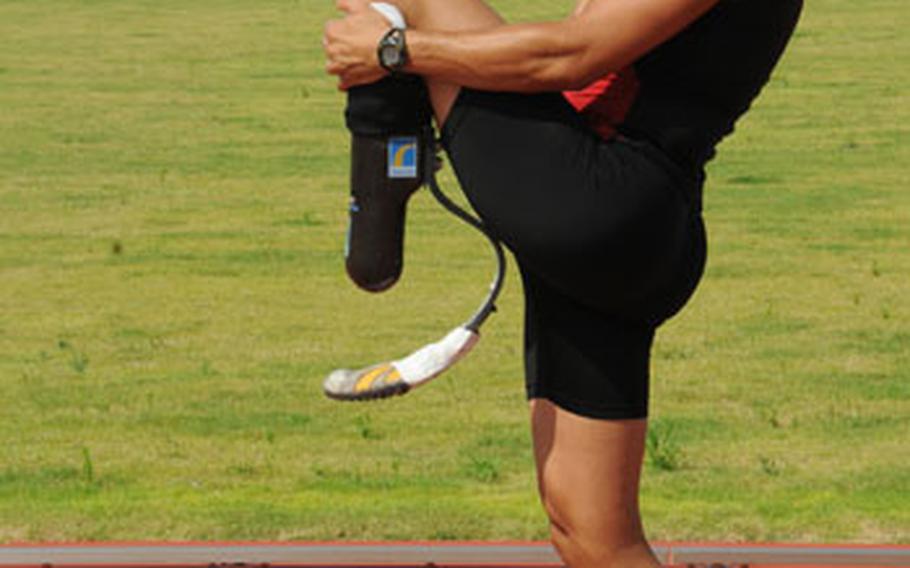 Marlon Shirley, 30, from San Diego, stretches before training Thursday at the track at Ryukyu Middle School on Kadena Air Base. Shirley, the two-time defending 100-meter Paralympic champion, is the only amputee to run the 100-meter dash in under 11 seconds. (Photo by Cindy Fisher/S&S) 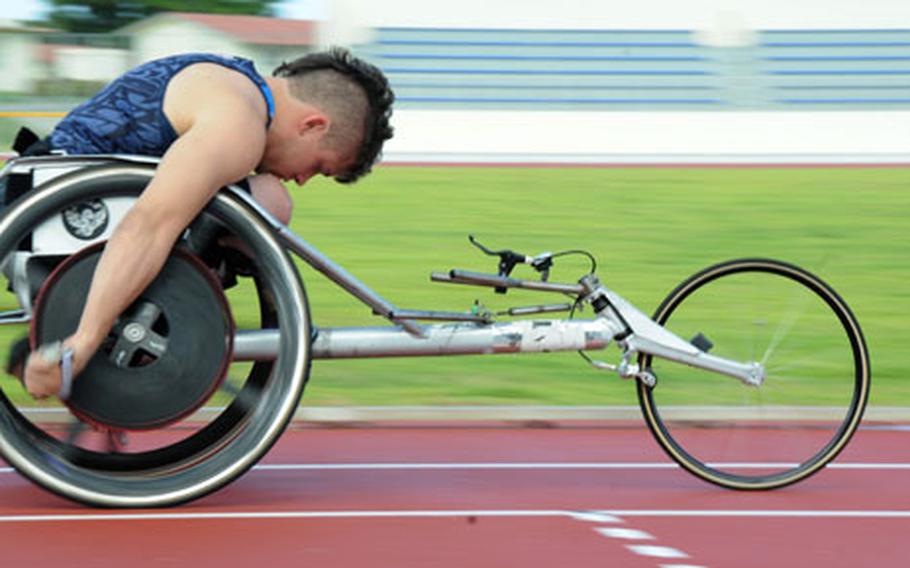 Josh Roberts, 26, from Morris, Ala., races around the track Wednesday at Ryukyu Middle School on Kadena Air Base. Roberts is one of the 82 athletes on the U.S. Paralympics swim and track teams training on Kadena and Camp Foster this week in preparation for the Paralympic Games scheduled to start Sept. 6 in Beijing. (Photo by Cindy Fisher/S&S)

KADENA AIR BASE, Okinawa &#8212; While serving as a specialist in the Army, Scott Winkler was paralyzed from the waist down when he fell off an ammunition truck in Tikrit, Iraq, in 2003.

At first, his injury made him angry, Winkler said Wednesday at Kadena, where he&#8217;s training with other Americans for the Paralympics, scheduled to start Sept. 6 in Beijing.

After the anger came depression.

"I was a soldier, and now I can&#8217;t be a soldier anymore," Winkler said. "I went from walking and was knocked back down to crawling."

His paralysis made the little things in life so much more difficult, he said. Something as simple as reaching for the remote control required major effort.

He was determined to push himself, and in 2006, he attended a military sports camp run by the U.S. Olympic Committee Paralympic Military Program, where he discovered the shot put and discus.

Winkler&#8217;s looking to bring home gold in the shot put. For him, competing at the Paralympics is another way to serve the country he loves.

Winkler said he doesn&#8217;t regret joining the Army. In fact, he wishes he could still serve.

Winkler and Melissa Stockwell are the first veterans injured in Iraq to earn a spot on the U.S. Paralympic team.

Stockwell was an Army first lieutenant serving as a transportation officer in Baghdad when she lost her left leg when a roadside bomb exploded next to her Humvee in 2004.

She said Wednesday that she never went through the anger and depression described by Winkler, mainly because her husband was by her side throughout most of her ordeal.

"He was the one who told me," she said of the moment she learned that her leg was gone. "He was there to pick me up."

She began swimming as part of her rehabilitation.

Before her injury, she had never heard of Paralympics. In fact, she said, she confused it with Special Olympics. But with all the wounded soldiers coming back from Iraq and Afghanistan, awareness has been raised about Paralympic sports, she said.

It&#8217;s another way to represent the country, she said.

Tibbs lost his right leg below the knee in a motorcycle accident in 2001 and learned of the Paralympics a year and a half later.

"I instantly knew it was something I wanted to do," he said.

In 2004 in Athens, Greece, Tibbs became the first U.S. active-duty member to compete at the Paralympics, earning a gold medal in the 4x100-meter relay and a silver medal in the pentathlon.

He works with wounded servicemembers at the U.S. Naval Hospital in Balboa, Calif.

"It&#8217;s hard to walk into a room to talk to a shipmate, soldier, airman or Marine who has had both his legs blown off and tell him that he can still achieve things," Tibbs said.

He points to his own Paralympic experience as proof.

"Paralympics is the highest platform of competition for athletes with disabilities," he said.

Stockwell said she had dreamed of going to the Olympics as a gymnast. She has realized that dream as a Paralympics swimmer, she said.