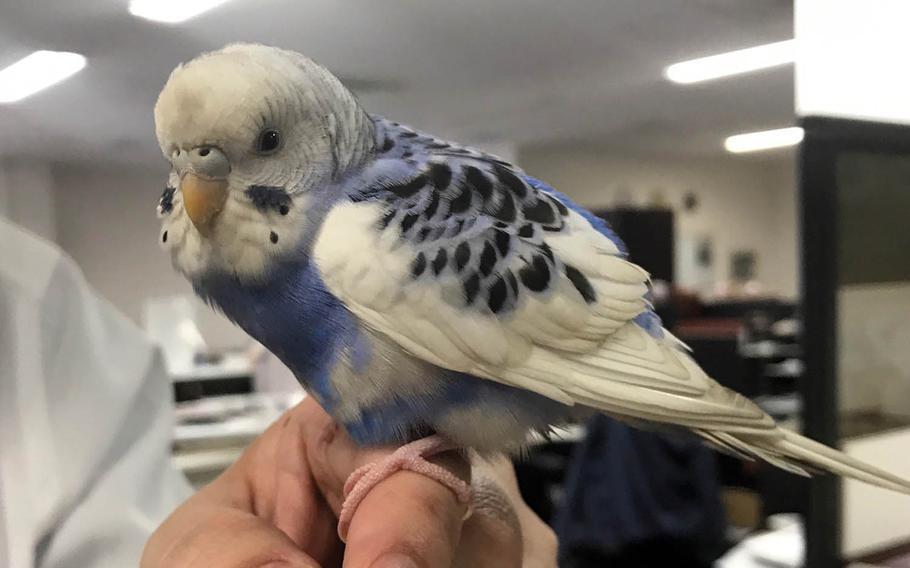 A parakeet found in mid-September by Stars and Stripes employees near the newspaper's office at Yokota Air Base, Japan, has been returned to its Japanese owners in Kanagawa Prefecture. (Leon Cook/Stars and Stripes)

YOKOTA AIR BASE, Japan — A blue and white parakeet found near Stars and Stripes’ office in western Tokyo has been reunited with its Japanese owner in neighboring Kanagawa Prefecture.

The mysterious avian visitor, found Sept. 14 in the newspaper’s Yokota parking lot, fluttered into the hearts of Stripes employees who launched a social media search for its caretaker.

Nine Yokota residents who saw a Facebook post about the bird offered to adopt it; however, it didn’t take long to track down where it really belonged. Within hours, Kumi Sato saw a photograph of her mother’s missing parakeet on Twitter, and got in touch.

It turned out that the bird — named Ao-chan — had absconded through an open doorway at its home in Sagamihara City on Aug. 5. It survived a nearly 15-mile gauntlet of cat-filled neighborhoods, territorial crows and military aircraft propellers.

Ao-chan is a therapy pet for Sato’s elderly mother who suffers from dementia. The bird’s sweet nature and beautiful plumage helped calm her down, she said.

The family had printed flyers and searched frantically for the bird after it escaped, Sato said.

“There is a shrine nearby and there are many crows and stray cats,” she said. “We wanted to somehow find it before it got attacked.”

When Sato arrived at Yokota to retrieve the lost parakeet she asked: “Ao-chan?” and got an affirmative tweet in reply, prompting a flood of happy tears.

Sato’s mother and sister are in much better spirits now that Ao-chan is back, she said.