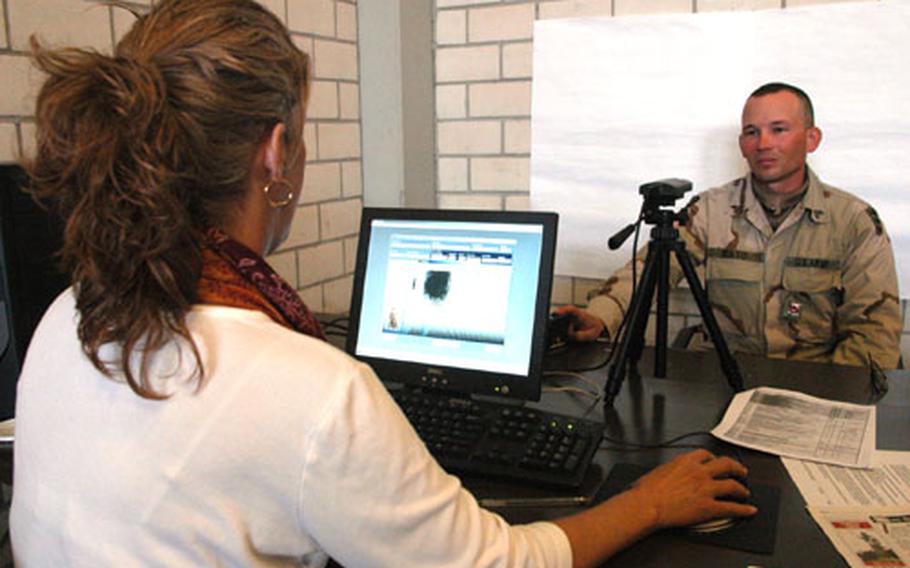 Like Wheeler, several soldiers from the 94th Engineer Battalion who had spent a year in Iraq realized their records needed updating. The 35-year-old father of four swore he dropped his wife as a beneficiary after their October 2002 divorce, he said.

Wheeler, a native of Waynesville, Mo., who wears a 1st Cavalry Division combat patch from Operation Desert Storm, shrugged off the paperwork snafu with his Midwestern calmness. He&#8217;d been around long enough to know that what shows on paper may differ from what the Army&#8217;s computerized system has on him.

A group of soldiers from the 38th Personnel Services Battalion helped Wheeler and his comrades through the records check and even had a computer set up to make immediate changes.

That morning about a half-dozen soldiers requested to have their ex-spouses removed from insurance policies, said Pvt. Jaison Chacko, 23, of Chicago.

The clerks agreed that most changes made were based on dissolved relationships.

Meanwhile, several others added new babies, either born just before or during the war, to their records.

Near the records station, Paige Park was trying to get Pfc. Walter Tomaszkiewicz, 22, of East Moline, Ill., to list personal information for the Installation Access Control System.

Tomaszkiewicz&#8217;s weight had changed since last year, and he struggled to remember his post office box number. But it was obvious from his answers that he was plain tired.

Much of the battalion registered for the base access system last year before the unit deployed, Park said. But several soldiers shook their heads when asked if they knew what IACS was for. They learned that the Army would soon scan their cards to allow them on posts.

While the IACS program is scheduled to begin in May, it&#8217;s already working in nearby Bamberg, Germany.

Spc. Josh Gibson, 23, of Gas City, Ind., who is attached to the engineers from the Bamberg-based 317th Maintenance Company, learned that a few soldiers returning from Iraq were turned away from his base because their cards were not registered. Those soldiers would have to go back to Vilseck to be added to the database, Park said.

For the engineers, much of the USAREUR-mandated program takes place in a large hall within the Langenbruck Center. Buildings belonging to a brigade from the 1st Infantry Division surround the center, which also houses a Tex-Mex restaurant, a barbershop and a bar.

When the engineers walked uphill from the center to their barracks, they passed soldiers from the &#8220;Big Red One&#8221; who were preparing for their year in Iraq.

Spc. Donald Bunn, 25, of North Hampton, Ohio, wondered how the outgoing soldiers were being trained. He watched them in their clean and pressed desert uniforms clustered in small groups for pre-combat instruction.

Do they have any idea what they are in for? Have they been told about the 140-degree summer days and the risks of roadside bombs?

With reintegration classes and loads of errands, the returning engineers had little time to interact with the departing infantrymen. With a nod or a wave, they silently wished them luck, from soldier to soldier.