Panjshir left to develop from the ground up 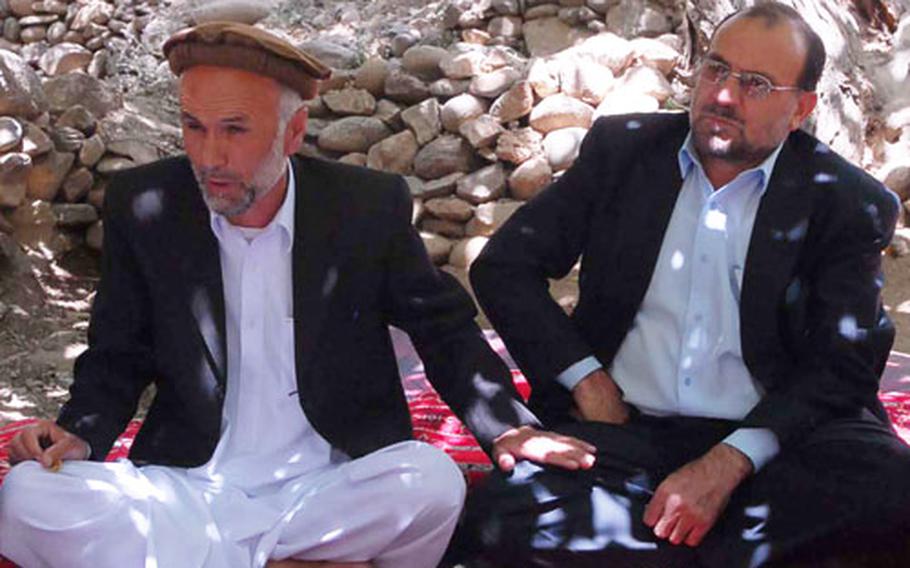 Gov. Haji Bahlol, right, and Mohammed Said, a district manager, attend the opening of a U.S.-funded health clinic. A U.S. Provincial Reconstruction Team has funded construction of dozens of clinics, school and other buildings, but efforts by the Afghan themselves have lagged. (Michael Gisick/S&S)

Gov. Haji Bahlol, right, and Mohammed Said, a district manager, attend the opening of a U.S.-funded health clinic. A U.S. Provincial Reconstruction Team has funded construction of dozens of clinics, school and other buildings, but efforts by the Afghan themselves have lagged. (Michael Gisick/S&S) 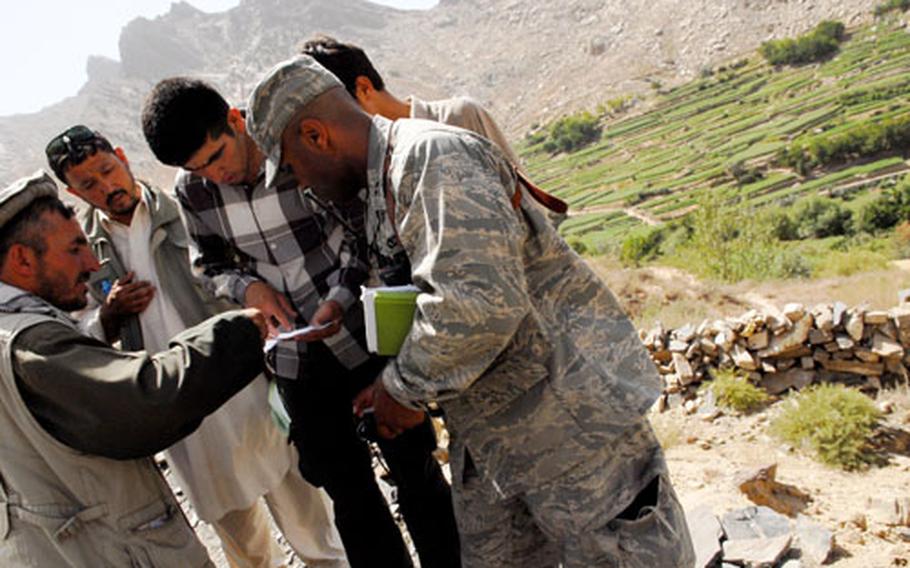 Capt. Kenneth McGinnis, an Air Force engineer, meets with Afghan contractors at the site of a proposed school. McGinnis said finding places to build has become increasingly difficult because of the lack of flat land in the valley. (Michael Gisick/S&S) 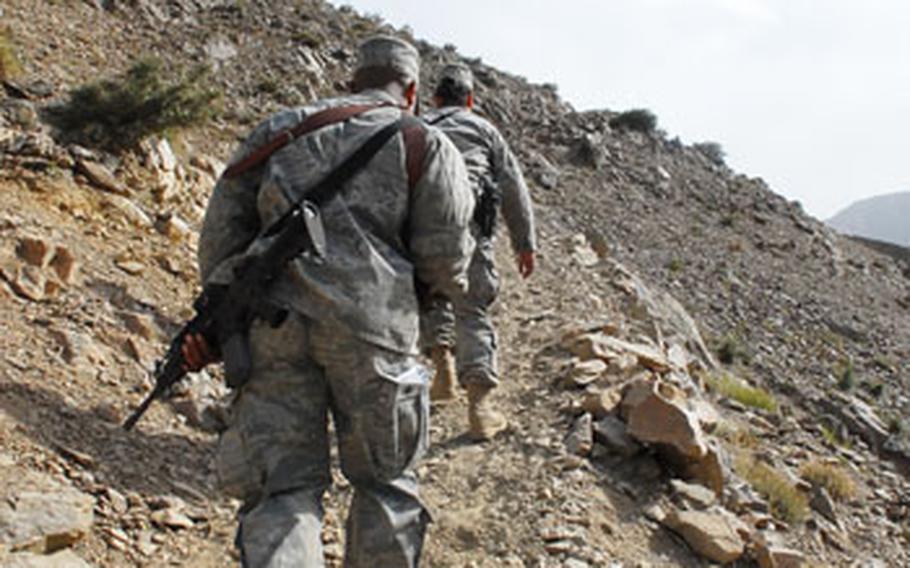 Members of the U.S. Provincial Reconstruction Team in the Panjshir Valley, Afghanistan, hike back to their vehicle after visiting a village. Unlike troops elsewhere in the country, the handful of American here often go without body armor. (Michael Gisick/S&S) 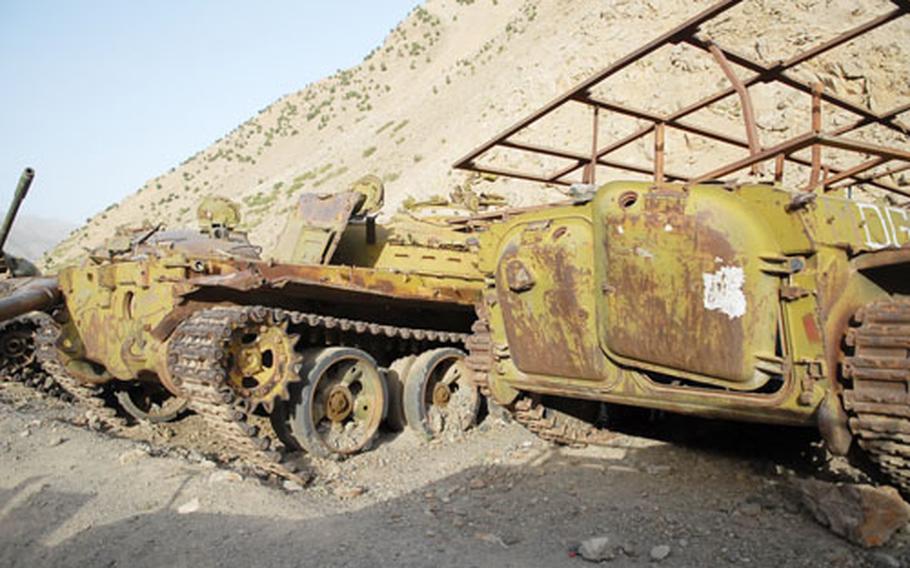 Rusting Soviet armored vehicles decorate much of the countryside, trophies of Panjshir’s resistance to the Russian occupation. The Panjshir Valley was never conquered by the Soviets. (Michael Gisick/S&S)

PANJSHIR VALLEY, Afghanistan &#8212; Done with their visit to one of the remote villages along the river that sprints down through this valley, four members of a U.S. military reconstruction team head back up the side of the hill.

It&#8217;s a steep enough climb to be exercise, and would seem considerably less sporting if they had to carry the heavy body armor that virtually all U.S. troops in Iraq and Afghanistan wear any time they head out. But in the Panjshir Valley, they travel light.

While insurgent violence has spread through many parts of southern and eastern Afghanistan, the Panjshir &#8212; once the stronghold of the anti-Taliban Northern Alliance &#8212; has remained a world apart. The handful of U.S. officials here, who have funded dozens of schools, health clinics and other projects, see the area as a success story, an example of what can be accomplished when Afghans reject fighting.

But if the Panjshir is a model &#8212; and it certainly has the looks &#8212; then it is also a reflection. There is little violence, but it has many of the other problems that have plagued rebuilding efforts across Afghanistan and, in the view of many observers, left the door open for a resurgent Taliban. More troubling, perhaps, are what U.S. and local officials describe as the inept efforts of the Afghan government to address those problems, even in an area as peaceful as Panjshir.

"These government officials are doing nothing, and everyone knows it," Mohammed Said, a district manager in Khenj, an area about halfway up the valley, said last weekend as he sat in his office beneath a portrait of Hamid Karzai, the Afghan president. Karzai has also complained of widespread corruption and inefficiency in the government ministries.

Indeed, donkeys remain the primary means of transport in the Panjshir, far outnumbering wheeled vehicles. Estimates put unemployment as high as 60 percent and adult literacy as low 25 percent. The prevalence of subsistence agriculture makes the first figure somewhat misleading, but there are few other economic opportunities and about half the valley&#8217;s 300,000 natives have gone elsewhere in search of work. There are critical shortages of doctors, teachers or skilled workers of any kind.

"The valley has plenty of farmers and fighters, but finding skilled labor is a real challenge," said Air Force Lt. Col. Russell Kaskel, commander of the U.S. Provincial Reconstruction Team, or PRT, in the Panjshir.

Since the first team arrived in 2005, the U.S. PRTs have funded upwards of 50 projects at a cost of more than $31 million, making the Panjshir PRTs among the most productive in the country. But efforts by the Afghan central government, which controls virtually all the country&#8217;s purse strings, have produced few results.

It&#8217;s a failure that is especially troubling since Panjshir is relatively close to Kabul, but disproportionately well-represented in the government bureaucracies. Said, whose penchant for blunt speech has endeared him to his American counterparts, acknowledged as much, noting that the Americans had completed many projects while Afghan officials had done little "even though they are from here."

Other provincial officials were more circumspect. The province&#8217;s governor, a sharp-dressing former mujahedeen commander known as Haji Bahlol, noted that the central government had strictly limited the power of the provinces but said he has had a good relationship with Kabul. Asked how the central government was performing, however, Bahlol replied simply, "You should ask them."

For their part, U.S. officers say some of the representatives of the government ministries are doing their best, but that overall efforts remain ineffective.

During a meeting with Said, U.S. Army Maj. Nicholas Dickson, a civil affairs officers, offered to bring representatives from the government ministries with him the next time he visited Khenj, a plan Said endorsed. But in the meantime, U.S. officers say they&#8217;ve built about all the schools and health clinics Panjshir needs. What it needs now, they say, are much larger projects that could spur economic development, especially the expansion of the paved road that currently extends only about a third of the way up the valley.

But the estimated $31 million price tag for that project &#8212; like the cost of a proposed major hydroelectric dam and other ambitious plans &#8212; likely falls well outside the scope of the U.S. PRT. The team is funded by the Commander&#8217;s Emergency Response Program, which is only designed to pay for urgently needed, small-scale projects. The military has already come under congressional fire for its broad use of CERP funds in Iraq, with criticism focusing on a $33 million hotel and office complex at the Baghdad Airport.

With the Afghan government struggling, foreign aid has also been slow to arrive, though an Italian non-governmental organization runs a hospital in Panjshir and a German aid group has launched construction of a vocational school. The U.S. Agency for International Development recently dispatched a representative to the Panjshir PRT, which had been without one for nearly a year, and officers hope that will be a sign of increased interest in the region.

During a visit by U.S. Army Maj. Gen. Jeffrey Schloesser, who commands American troops in eastern Afghanistan, Bahlol talked up the hydroelectric dam, saying it would bring employment and allow the province to export electricity. Making his pitch, Bahlol harkened to a saying he attributed to Ahmad Shah Massoud, the legendary Panjshiri mujahedeen commander whose mausoleum, undergoing renovations, looks over the valley from a prominent hilltop.

His meaning was not lost on the American commander.

"This province is likely the most secure province in the country," he said. "It deserves to achieve the benefits of that security."

While reconstruction efforts in Afghanistan have often been seen by the military as a means of luring support away from insurgents, in the Panjshir there are no insurgents.

Guarded by the jagged walls of its mountains and its hard-fighting Tajik tribesmen, the Panjshir has long charted a fiercely independent course. Panjshiri mujahedeen led by Ahmad Shah Massoud were among the first to rise up against the Soviets after their 1979 invasion, and the valley was the only part of Afghanistan never occupied by the Red Army, despite eight costly attempts that left Russian tanks scattered across the steep landscape like trophies.

After the Taliban swept to power in the 1990s, Massoud again retreated to the Panjshir, where his fighters held on until the American invasion in 2001, though Massoud himself was killed by suicide bombers two days before the Sept. 11 attacks.

With Tajiks taking prominent roles in the U.S.-backed government that replaced the Taliban, Panjshiris have been largely content to set aside their arms, though they have joined Afghan security forces in considerable numbers.

Still, the rough terrain and native insularity that made the Panjshir so difficult to conquer have also complicated development, U.S. officials say. Efforts to tap the valley&#8217;s considerable deposits of lead, emeralds and other semi-precious stones, for example, have been slowed by the lack of good roads.

The Afghan government has signed two contracts with private firms to build a pair of small hydroelectric dams on tributaries of the Panjshir River. But one of the contracts, rather inexplicably, was signed with a Russian company whose workers were promptly "run out of the valley," officials say.

Initial efforts to establish a military reconstruction team also met some resistance. But after careful negotiations with Panjshir&#8217;s governor, who guaranteed the PRT&#8217;s security, a succession of U.S. teams have gained traction, building dozens of schools and health clinics and funding programs like beekeeping and chicken farming, the latter aimed at Panjshiri women.

Officials say what the valley needs now are larger projects, particularly roads, which they say will spur development and link Panjshir with surrounding areas. But the estimated $31 million dollar cost of running a paved road the length of the valley would exceed the total amount that the military has spent here since 2005, roughly $30 million.