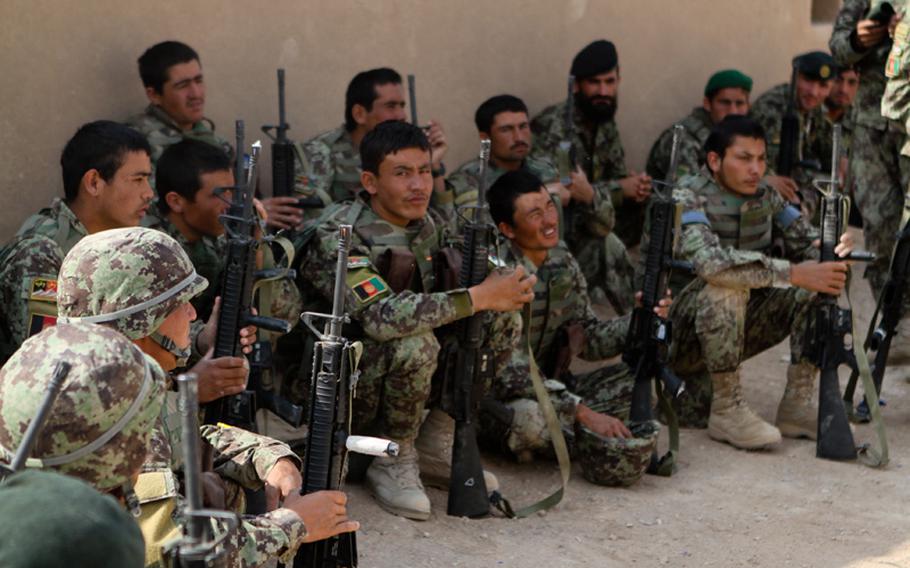 STUTTGART, Germany — Defense Secretary Leon Panetta indicated Friday that he favors a plan now under consideration by NATO to keep Afghan troop numbers at a significantly higher level than planned, in an effort to achieve “greater flexibility” as the alliance looks to shrink its own presence in the country.

President Barack Obama is considering a plan that would keep Afghan security forces at 352,000 through 2018, higher than the current plan for a force of 230,000 after 2014. Such a change would cost about an extra $2 billion annually.

“Our view is that if the president makes the decision to keep the ANSF presence at 352,000, that that would be an investment that would be worth making,” Panetta said during a news conference in Brussels, where NATO defense ministers met for two days of talks. “It would allow us greater flexibility as we take down our troop (levels).”

Panetta would not confirm comments from German defense officials that the U.S. was considering a post-2014 presence of between 8,000 and 12,000 troops.

“What we discussed was a range of options,” Panetta said. “I don’t want to discuss particular numbers.”

When NATO combat operations conclude at the end of 2014, NATO will complete a shift to a training-and-advisory role. The plan is to have training centers not just in Kabul but across Afghanistan, he said.

“We felt it was important to develop this regional approach,” Panetta said.

Panetta also said the U.S. will continue to engage in counterterrorism operations as part of an effort to prevent Afghanistan from once again serving as a safe haven for al-Qaida.

As the U.S. and NATO eye the plan for a beefed up Afghan force, they do so at a time when defense budgets across the alliance are under increased pressure. For its part, the Pentagon is bracing for billions in additional cuts as sequestration looms. With virtually its entire civilian workforce facing furloughs, selling to Congress the idea of spending more on Afghan troops could be tough.

Panetta once again scolded Congress for failing to solve the ongoing budget crisis, the effects of which would ripple across the Atlantic.

“If sequestration does take place it could impact not only our readiness, but frankly the role we would play with regard to the readiness of NATO as well,” Panetta said.

Meanwhile, plans to transfer security responsibly across the country to Afghan forces remains on track to happen later this year, according to NATO Secretary-General Anders Fogh Rasmussen.

Currently, Afghan troops are taking the lead in areas where 87 percent of the Afghan population resides, according to Rasmussen.

“Compared with his time two years ago, they are better trained, better educated and more effective,” Rasmussen said.