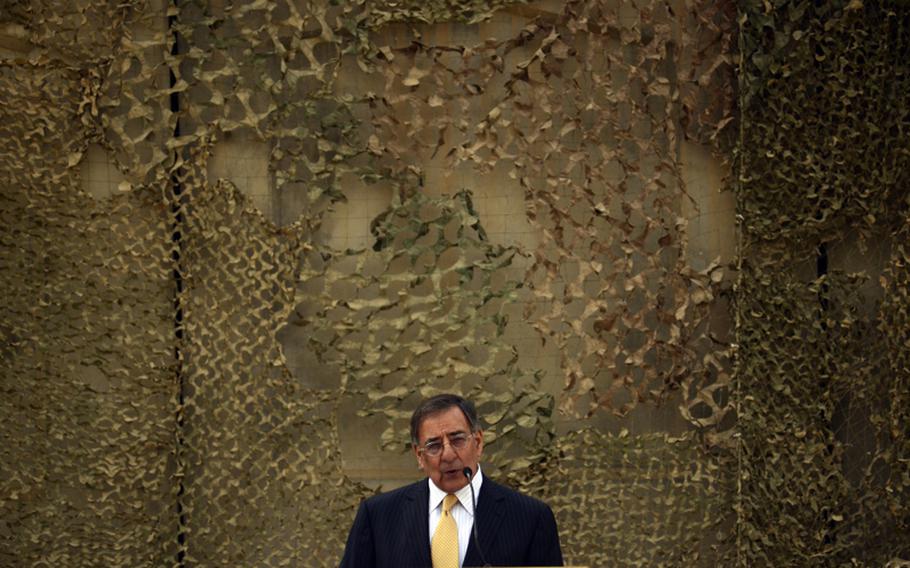 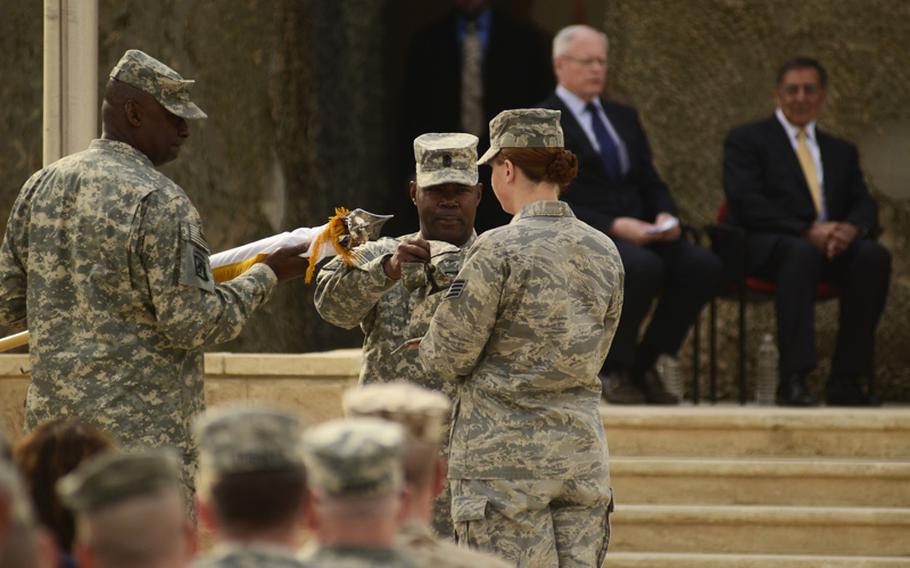 BAGHDAD &mdash; The U.S. military ceremonially ended its nearly nine-year mission in Iraq on Thursday, leaving a nation that Secretary of Defense Leon Panetta called &ldquo;sovereign, secure and self-reliant,&rdquo; but which still faces imminent threats to its security.

Panetta and other senior leaders spoke in front of about 100 of the fewer than 4,000 servicemembers remaining in Iraq at the former Sather Air Base, which has been rechristened as the Baghdad Diplomatic Support Center to reflect its new State Department-led role.

&ldquo;We will never forget the lessons of war, nor will we ever forget the sacrifices of the more than 1 million men and women of the U.S. armed forces who served in Iraq, and the sacrifices of their families,&rdquo; Panetta said. &ldquo;Through deployment after deployment after deployment, families somehow withstood the strain, sacrifice and heartbreak of watching their loved ones go off to war.&rdquo;

Although Panetta trumpeted gains in security since the darkest days of the insurgency, he also warned that terror groups remained potent and poised to take back those gains.

&ldquo;Let me be clear: Iraq will be tested in the days ahead,&rdquo; Panetta said.

Each senior official took time to pay tribute to those who died or were wounded since the March 2003 invasion.

As of Wednesday, 4,474 servicemembers and 13 Defense Department civilians have died during the Iraq mission, according to Defense Department figures. More than 32,000 servicemembers were wounded during that time. Roughly 100,000 Iraqi civilians have died from violence since 2003, according to U.S. and Iraqi government agencies.

&ldquo;Those lives have not been lost in vain,&rdquo; Panetta said. &ldquo;They gave birth to a free, independent and sovereign Iraq.&rdquo;

The group later flew out of the air base, which shares space with Baghdad International Airport, for the last time after what has been 20 years of sporadic conflict since the original Gulf War.

&ldquo;The next time I fly in, I&rsquo;m going to have to be invited in by the Iraqi government, and I kind of like that,&rdquo; Dempsey said.

Although most remaining servicemembers will leave Baghdad by air, the very last troops are scheduled to leave by convoy &ldquo;within days,&rdquo; said Maj. Gen. Jeffrey Buchanan, U.S. Forces-Iraq spokesman, prior to the ceremony.

Convoys headed to Kuwait in recent weeks have been attacked by rockets and roadside bombs in areas south of Baghdad, Buchanan said.

There has been some vehicle damage but no significant injuries.

&ldquo;Most of the attacks on the convoys out have not been effective,&rdquo; Buchanan said.

He attributed the attacks mainly to Iran-allied militias.

If the current withdrawal plans stand, the U.S. military would exit Iraq ahead of the Dec. 31 deadline mandated by the current security agreement with Iraq.

On Thursday, hundreds of troops were scheduled to leave Baghdad.

Only two U.S. bases remain open, one in Diwaniyah province, and the other in Dhi Qar province.

The U.S. military mission is giving way to a multibillion-dollar State Department mission in 2012 that will maintain as many as 16,000 staff and contracted personnel in Iraq. Their tasks will include economic and agricultural development, as well as management-level training of Iraq&rsquo;s police forces, which international monitors have described as plagued by corruption and civil rights abuse.

The Defense Department will keep 157 servicemembers and civilians in Iraq under the State Department-run Office of Security Cooperation-Iraq, which will facilitate the sale of more than $11 billion in weaponry and equipment to the Iraqi government.

The State Department will also retain 80 military Mine Resistant Ambush Protected vehicles, or MRAPs, as well as other vehicles and equipment designed to protect against roadside bomb attacks. The vehicles will be operated by civilian contractors trained by the military, Buchanan said.