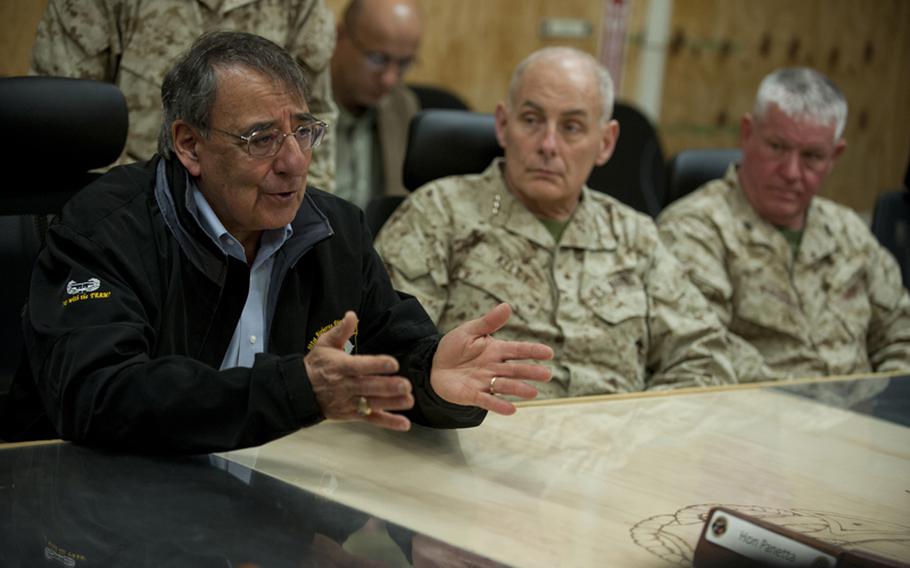 WASHINGTON &mdash; Defense Secretary Leon Panetta this week blamed the Taliban for the increasing number of green-on-blue attacks, a departure from previous comments in which he and other military leaders had downplayed the group&rsquo;s involvement.

&ldquo;The reality is, the Taliban has not been able to regain any territory lost, so they&rsquo;re resorting to these kinds of attacks to create havoc,&rdquo; Panetta told reporters in a Pentagon press briefing Tuesday. &ldquo;We have not and will not allow this kind of intimidation to undermine our efforts to build up the Afghan National Security Force and try to put it more and more in the lead.&rdquo;

On Monday, an Afghan policeman shot at NATO forces and Afghan soldiers in Nangarhar province. No coalition forces were killed in the attack, but it was the fifth such incident reported in the span of a week.

In March, after attacks that killed two British troops and one American, Panetta called the growing number of attacks by uniformed Afghan security forces on coalition troops &ldquo;sporadic incidents.&rdquo;

&ldquo;I don&rsquo;t think they reflect any kind of broad pattern,&rdquo; Panetta said at the time.

Marine Gen. John Allen, the top U.S. commander in Afghanistan, said then that the Taliban wanted to take credit for the attacks, &ldquo;when in fact the majority are not in fact a direct result of Taliban infiltration.&rdquo;

Last year, when such incidents emerged as a cause for concern, NATO officials attributed the growing trend to disgruntled Afghan forces or simply to disagreements between allies.

&ldquo;[The shootings are] usually related to people getting into arguments,&rdquo; Lt. Col. David Simons, spokesman for the NATO Training Mission-Afghanistan, told Stars and Stripes in April 2011.

&ldquo;Let&rsquo;s put it in the vernacular of a bar fight. But here, they have weapons,&rdquo; Simons said. &ldquo;It&rsquo;s just, somebody told them to do something. Or they didn&rsquo;t like the way they were talked to.&rdquo;

So far this year, there have been 29 green-on-blue incidents in Afghanistan, compared with 16 in the same period last year, according to Defense Department figures. There have been 71 such attacks since 2007, when the DOD began tracking them. So far this year, 37 coalition members, including contractors, have been killed in the attacks. Since 2007, that number is 109.

In acknowledging that the Taliban is playing a significant role, Panetta turned to an explanation that has been used in the past in relation to noteworthy bombings and other attacks in both Afghanistan and Iraq &mdash; a desperate enemy turning to high-profile tactics to compensate for shortcomings in traditional combat.

&ldquo;The reason the Taliban is targeting in this manner, we believe, is the success that our Afghan forces are having on the battlefield,&rdquo; Panetta said Tuesday.

Panetta later said there is &ldquo;no one source&rdquo; producing the green-on-blue attacks, and that Taliban ties are only one of several potential reasons Afghan forces would turn their weapons on coalition troops.

Gen. Martin Dempsey, chairman of the Joint Chiefs of Staff, said in the press briefing that Allen will convene a meeting of all the generals in Afghanistan to talk about how to better prevent green-on-blue incidents, and Panetta outlined several steps the International Security Assistance Force is taking for prevention.

One of those steps is a &ldquo;guardian angel&rdquo; program that would provide security during meetings between NATO and Afghan troops, which Panetta said &ldquo;involves identifying one individual to stand to the side so that he can watch people&rsquo;s backs and hopefully identify people who would be involved in these attacks.&rdquo;