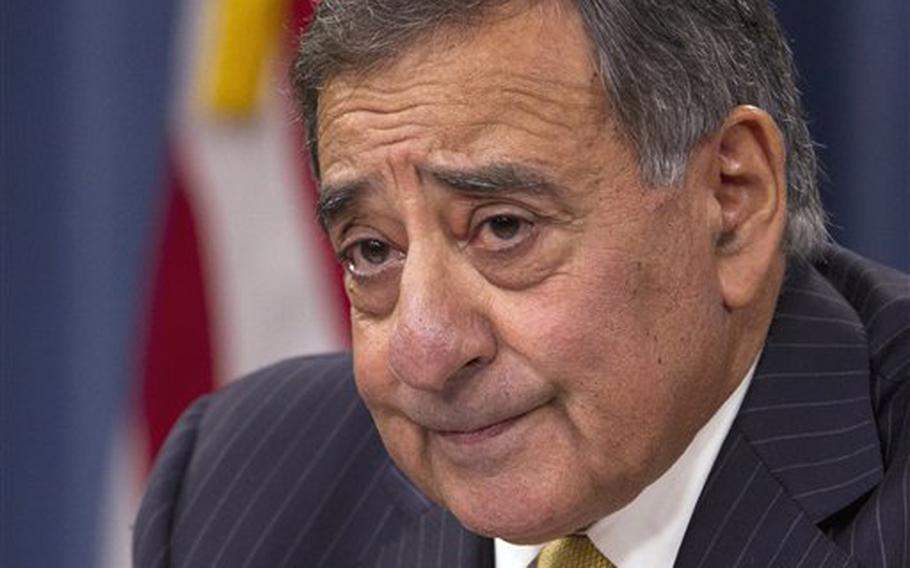 Defense Secretary Leon Panetta, at the Pentagon on Nov. 10, 2011. Panetta announced on Dec. 12, 2012 that two Army combat brigades will be withdrawn from Europe. (Evan Vucci/The AP)

STUTTGART, Germany &mdash; Two U.S. Army combat brigades will be withdrawn from Europe as part of a new Pentagon defense strategy that aims to find efficiencies while shifting more strategic focus to Asia.

Defense Secretary Leon Panetta made the announcement Thursday while en route to a town hall meeting with troops at Fort Bliss, Texas.

In an interview with the American Forces Press Service, Panetta said the Army intends to maintain a strong presence in the region via rotational units.

Panetta did not say which of the four Europe-based brigades would be withdrawn, but past Pentagon plans have focused on the 170th Infantry Brigade in Baumholder and the 172nd Infantry Brigade, headquartered in Grafenw&ouml;hr. Panetta also did not lay out a time line for when the units would be withdrawn or explain whether the units would be returned to bases in the U.S. or inactivated.

However, as the Army looks to cut end strength from 570,000 soldiers to 520,000, a more likely scenario could be that the units will be disbanded.

As the Army replaces the two brigade combat teams with rotational units, the Europeans could see more engagement with U.S. forces. For the past decade, U.S.-based infantrymen have spent much of their time in Afghanistan and Iraq, limiting their involvement in European training missions.

Lt. Gen. Mark Hertling, commander of U.S. Army Europe, could not provide details about which units will be impacted, saying those decisions still require formal approval.

Hertling said he will be meeting with commanders in Europe next week to brief them on what to expect in the year ahead.

&ldquo;As with any decision, there are down- and upsides,&rdquo; Hertling said in an interview Friday. &ldquo;My desire is to ensure soldiers, family members [and] local government officials know what we&rsquo;re doing.&rdquo;

In Schweinfurt and Baumholder, there was a sense of confusion and anxiety Friday as news rippled through.

Rumors are flying, said Geraldine Durman, 41, the spouse of a brigade Army master sergeant, but no one&rsquo;s heard anything official yet.

Durman has been at Baumholder with her family since 2009. If a move does happen, she said, she doesn&rsquo;t mind. &ldquo;If they say we have to move, we have to move. It&rsquo;s part of being in the military. You just have to adapt.&rdquo;

Durman and others, however, said they would be surprised to see Baumholder shuttered, even if the brigade does move.

&ldquo;The rumor is there will be soldiers here for the future,&rdquo; said Sigrid &ldquo;Ziggy&rdquo; Zimmer, 52, manager of the base&rsquo;s Rheinlander club. &ldquo;Which ones, what they will be doing, I have no clue.&rdquo;

But Zimmer, who was born and raised in Baumholder and also owns a hotel and restaurant in town, says she still worries, since so much uncertainty is swirling around the future of the base.

Like Zimmer, many of the 4,000 or so Germans living in Baumholder rely heavily on Americans for their livelihood, from renting Americans apartments to shuttling them around in taxis. &ldquo;I would say we would lose about 70 percent of our business&rdquo; if the base went away, she said, while taking a break from working in the Rheinlander kitchen on Friday.

&ldquo;I hope they don&rsquo;t close it. Our lives will be changed,&rdquo; she said wistfully, before returning to work.

Whatever the decision, it seems at the moment that &ldquo;all eyes are on us,&rdquo; said Sgt. 1st Class Moussa Doukoure, the first sergeant for the brigade&rsquo;s 40th Engineer Battalion (rear detachment). &ldquo;Everyone thinks it&rsquo;s the 170th (that will leave Europe),&rdquo; he said, &ldquo;but nobody knows.&rdquo;

&ldquo;At the end of the day, we&rsquo;re here to support and execute any decision that our senior leaders at the Department of Defense and Department of the Army make.&rdquo;

Workers in Baumholder, however, said they are hopeful that the garrison &mdash; named as one of the Army&rsquo;s &ldquo;enduring&rdquo; installations in Europe just a few years ago, will continue in some form.

The garrison in Schweinfurt, home to a portion of the 172nd brigade, is not on the list of enduring communities. Chris Suttles, a civilian worker, said he has heard repeated talk about the base closing down during his 20 years in the community. Now, he fears time is running out.

&ldquo;I know I would be looking for a job if they closed everything down,&rdquo; said Suttles, who works at the base bowling alley.

A spokesman from Germany&rsquo;s Ministry of Defense said U.S. officials have informed the German government about its plans, but the spokesman declined to disclose details about which brigades will depart.

Meanwhile, Hertling is already working with U.S.- based Army units on ways to work together in Europe. Though he will see his troop levels shrink, introducing more U.S.-based troops to Europe on a rotational basis has advantages, he said.

&ldquo;This has been something we had been trying to do in Europe for the last eight years,&rdquo; Hertling said. For U.S. troops, rotating through Europe offers up &ldquo;a great expeditionary experience.&rdquo;

While there is the potential for establishing a brigade in the U.S. that specializes in working with European partners, Hertling says the first steps will be focused on rotating smaller, battalion-size units through Europe.

&ldquo;We&rsquo;re in the very early stages of the development of this concept,&rdquo; Hertling said. &ldquo;Yes, it&rsquo;s the end of an era. And it&rsquo;s the beginning of a new era.&rdquo;

Rotational forces would provide a more consistent presence, Panetta told the Pentagon news service, and are expected to play a big role, not only in Europe, but also in Africa.

U.S. European Command already relies on rotational forces to carry out its mission in Europe. In March, the Marine Corps will transport about 300 reservists to Romania for a five-month mission focused on training militaries across the Black Sea region.

Marine Forces Europe commander Lt. Gen. Dennis Hejlik, during a visit to Stuttgart this week, told Stars and Stripes that the rotational model has worked well for the Corps in Europe.

&ldquo;The value of a rotational force is a persistent forward presence,&rdquo; Hejlik said Tuesday. &ldquo;It really isn&rsquo;t a rotational force. It&rsquo;s the best bang for the buck. It is the most cost-effective. You can use reserve forces. The other part of that is with rotational forces it is a lot more cost effective when it comes to infrastructure. The costs of moving families, schools, hospitals, and sick bays and commissaries and PXs. All that comes along with a permanent force.&rdquo;

Hertling said rotational forces can play a key role in training at the smaller unit level, but that a forward presence is still required to round out the mission. Whether it is maintaining relationships with European military leaders or managing the facilities and training grounds rotating troops need to execute their mission, a footprint in Europe is required, he said.

&ldquo;You need to supplement that (rotating force) with other things. That&rsquo;s what USAREUR brings,&rdquo; Hertling said.

Whether the cuts for Europe will be restricted to the two brigades remains to be seen. More details about the Pentagon plan are expected when the fiscal 2013 budget plan is released in the coming weeks. In addition to combat brigades headquartered in Baumholder and Grafenw&ouml;hr, USAREUR also includes the 2nd Cavalry Regiment in Vilseck, Germany and the 173rd Airborne Brigade Combat team in Vicenza, Italy.

The U.S. has been restructuring its Europe-based force since the end of the Cold War, when there were about 300,000 U.S. troops in Europe. For the better part of a decade, the Pentagon has wrestled with how to structure its remaining warfighting units in Europe.

Since 2004, the Defense Department had planned to transfer two of its four combat brigades in Europe to the States. However, that strategy was adjusted in April when the Pentagon announced it would return just one brigade to the U.S. The decision to keep three brigades was based on a White House review, NATO&rsquo;s plans for the future and the &ldquo;broad range of 21st century challenges,&rdquo; DOD stated in April.

But with massive budget cuts looming, military planners were forced to revisit the issue. Now, the Pentagon has reversed course once again, bringing back the earlier two-brigade model that dates back to the tenure of former Defense Secretary Donald Rumsfeld.