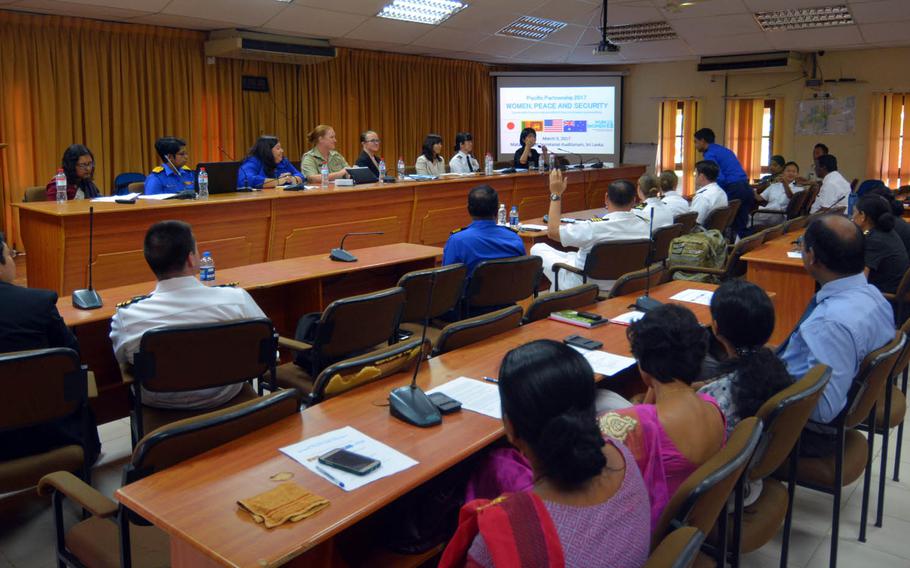 MATARA, Sri Lanka — The military officers and civil official panelists gathered in an auditorium off Sri Lanka’s south coast have seen the glazed eyes when they walk into a barracks room to talk about “another women’s thing.”

The United Nations Women, Peace and Security agenda isn’t foremost on a combatant commander’s mind during a conflict or a humanitarian operation — but it should be a factor, panelists told the gathering of Navy, Army, Sri Lankan military and local citizens on Thursday.

“It’s all about capability and operational effectiveness in the army,” Australian Army Lt. Col. Natalie Leaver said. “So if we can enhance that and show them how to do that, then they are on board in an enthusiastic way.”

The UN began adopting the WPS agenda in the 2000s through a series of resolutions that focus on protecting women, preventing violence and involving women in the peace process after a conflict — particularly in nations where gender inequality runs highest.

Among other things, training militaries to talk with women about their needs prevents a lot of wasted time.

One of Leaver’s multiple examples centers on an Australian combat engineering team that talked to the men in an Afghan village, who asked for a closer well.

The women had to walk nearly two miles each day to get the water. It took away from time in the home, the men said.

After the combat engineers planned and built the well, what did the women do?

“They destroyed it,” Leaver said. “That walk was the only time the women had to talk amongst themselves.”

Anecdotal evidence suggests that women’s participation in security forces increases domestic violence reporting and trust, though there is little data available because so few women serve in security roles globally, she said.

“The WPS agenda is about prevention, but it is also about ensuring that the recovery afterwards actually builds peace and not just stops violence — there’s a difference,” Cueva-Beteta said.

To date, the U.S. and 62 nations have developed national action plans aimed at promoting the WPS agenda.

The U.S. plan works through the Defense Department and State departments and the U.S. Agency for International Development; its roots lie in programs ranging from sexual-assault response for U.S. servicemembers to basic health programs for developing nations.

Sri Lanka, which is emerging from decades of civil war, does not yet have an action plan, though its gender gap is less severe compared to conflict-torn nations in other parts of the world.

The WPS meeting on Thursday was organized by Japanese defense and government officials, in conjunction with Sri Lanka, the U.S. and Australia.

The Navy, Army and Marine Corps are in Sri Lanka with their allies as the first stop in Pacific Partnership 2017. The annual exercise is the largest multilateral humanitarian assistance and disaster relief preparedness mission conducted in the region deemed by military officials as the Indo-Asia-Pacific.

It is the first time the exercise has stopped in Sri Lanka, which borders one of the world’s busiest shipping routes.

Pacific Partnership is later scheduled to pull into ports in Vietnam and Malaysia aboard the expeditionary fast transport ship USNS Fall River.