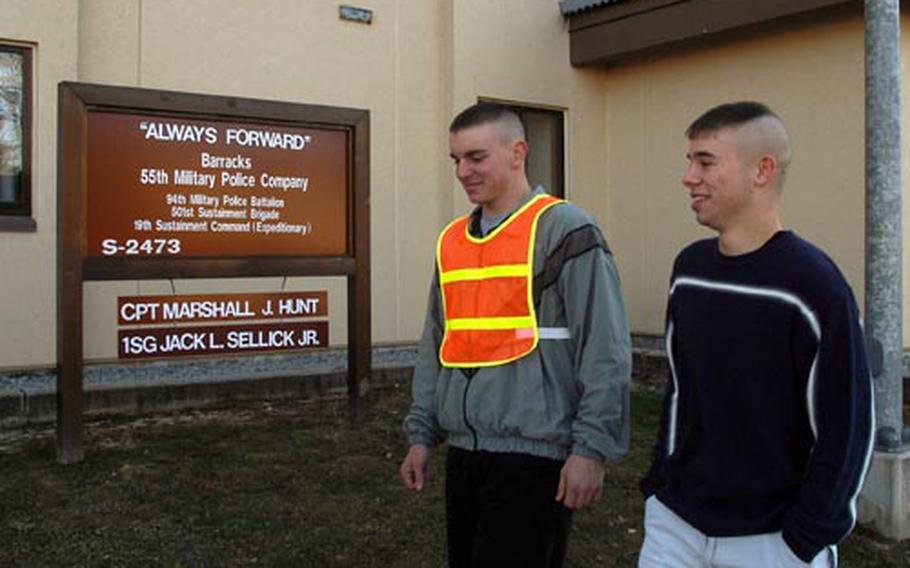 Pvt. Zachary Phillip Voelkel, left, and Pfc. Andrew Strzyzewski, of the 55th Military Police Company, walk by their barracks Wednesday at Camp Casey. A panel of soldiers created a presentation Wednesday at the Army Family Action Plan conference that will ask garrison officials to let all soldiers have their own private rooms. Added gear requirements have made it difficult for roommates, some of whom share older, smaller rooms than today&#39;s Army standard. (Erik Slavin / S&S)

Today&#8217;s Army standard is a 160-square-foot room for each soldier, said officials at U.S. Army Garrison-Red Cloud, a collection of bases from north of Seoul to the Demilitarized Zone.

Some of the buildings within the garrison, also known as Area I, were built in the &#8217;50s and &#8217;60s to a smaller standard. Junior enlisted soldiers are sharing those rooms in some cases.

Giving those soldiers their own spaces would improve the soldier readiness and quality of life, a panel of soldiers at the Army Family Action Plan Conference said Wednesday.

Although commanders for the most part stayed out of the panel discussions so the soldiers could speak freely, Camp Casey&#8217;s enclave commander told Stars and Stripes on Wednesday that private rooms have been considered.

"It&#8217;s being evaluated. How we can improve the footprint is always under review," Lt. Col. Donald Meisler said.

There are unused barracks rooms across the garrison, officials said Wednesday.

Depending on rotations, barracks in Area I are usually only 60 percent to 70 percent occupied, according to garrison officials. When the multiple barracks buildings currently under renovation are included, that figure is even lower.

Barracks occupancy could fall as soldiers at camps Jackson, Red Cloud and Stanley take advantage of a recent policy change allowing them to gain command sponsorship and live off-post.

The garrison can&#8217;t build new barracks because it is considered "nonenduring" under the U.S. Forces Korea relocation plan, which has been delayed several times.

Area I is renovating its older barracks and adding new furnishings but is limited by its quantity of temporary housing, Meisler said.

However, the garrison and 2nd Infantry Division commanders would have to consider how spreading units across multiple bases might affect their cohesion, Meisler said.

Soldiers on Wednesday&#8217;s panel were asked to concentrate more on what they thought should be done and less on the execution. However, several said they thought units could spread to different bases.

Jordan cited as examples the 55th and 94th Military Police, which have platoons spread out at various bases.

Camp Red Cloud in Uijeongbu, where about 1,000 soldiers are stationed, is relatively cramped. About 20 minutes across town, Camp Stanley has barracks buildings sitting vacant.

The majority of 2nd ID is based within the Camp Casey enclave, which is about 40 minutes from Uijeongbu.

"Many of them have no qualms about moving elsewhere," Figueroa said.

Soldiers said Wednesday that their idea wasn&#8217;t entirely about more room for entertainment.

Although Joyce has her own room, space is tight.

Joyce has three sets of gear to store. Each large duffel bag full of gear weighs 80 to 100 pounds. The bulk means she doesn&#8217;t have room within her storage locker to hang clothing.

And, she said, her unit&#8217;s soldiers have been issued the Army&#8217;s new cold-weather gear, but she cannot turn in any old gear.

The panel on barracks and housing, as well as panels on force support, single and South Korean soldiers, and community services, were scheduled to present their suggestions to garrison commanders Thursday.