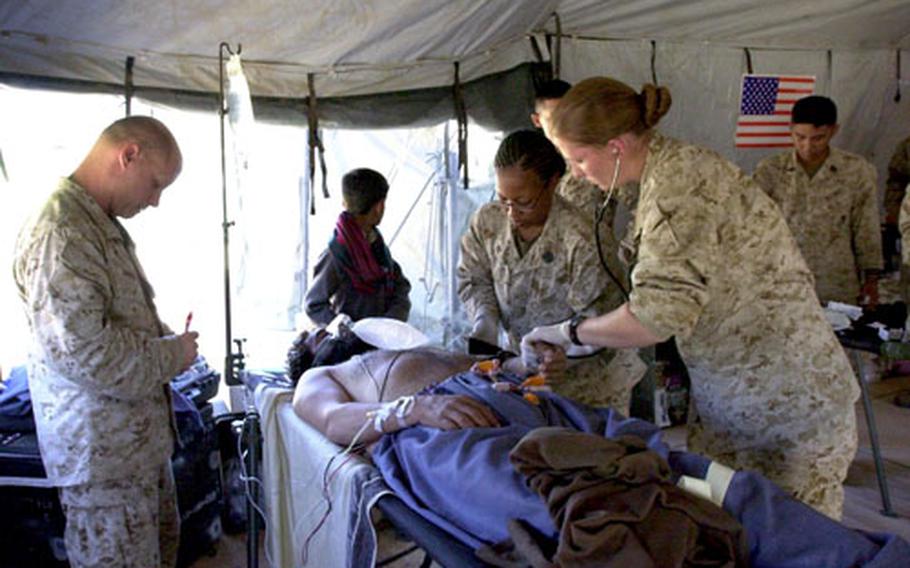 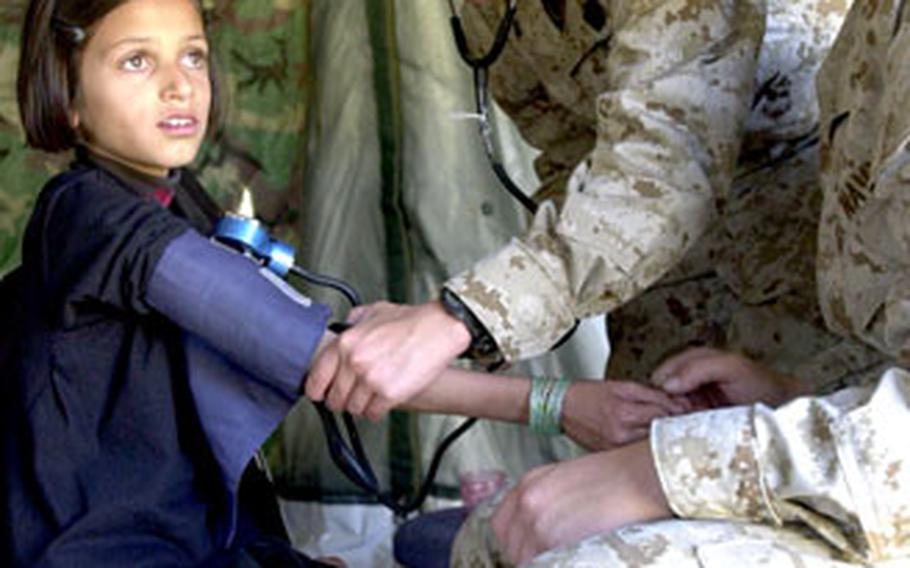 Seaman Lacy Helphenstine, right, watches as Petty Officer 3rd Class Fridalyn Ocampo takes the blood pressure of a young Pakistani girl Thursday in the triage tent of a field hospital from III Marine Expeditionary Force, which has been set up in Shinkiari, Pakistan. (Fred Zimmerman / S&S) 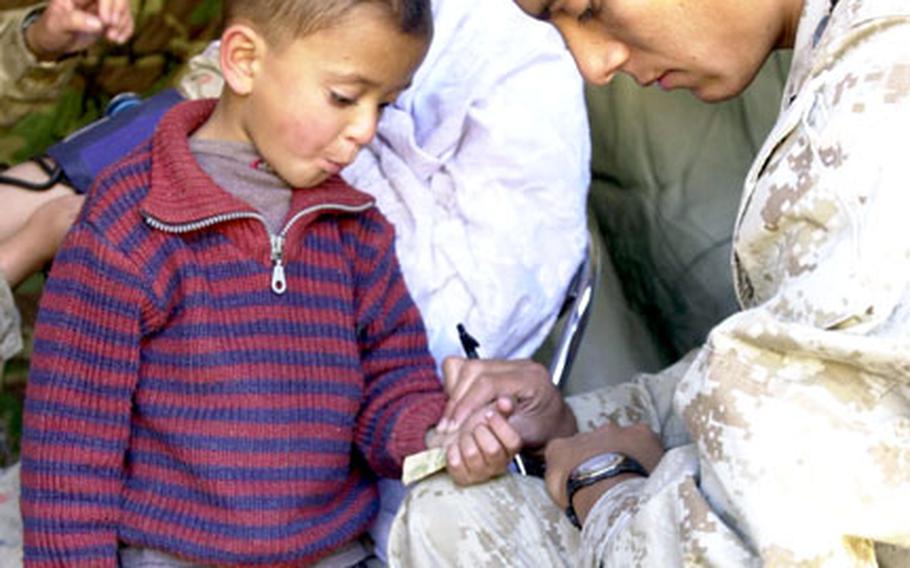 SHINKIARI, Pakistan &#8212; Build it and they will come: That famous saying from the movie &#8220;Field of Dreams&#8221; was heard coming from several of the medical staff members at the III Marine Expeditionary Force field hospital here Thursday.

Physicians, nurses and corpsmen weren&#8217;t quite sure what to expect during their first full day of operations at the facility but they quickly found that word had spread, seemingly at light speed. The local population knew they were open for business.

The detachment from Okinawa includes Marines and sailors from 3rd Marine Logistics Group and the Bravo Surgical Company from 3rd Medical Battalion. In the first nine hours the facility was open, 69 patients were seen &#8212; 64 in the triage tent for &#8220;general sick call&#8221; and five in the emergency room, according to medical officials.

One of the five was a Pakistani man in &#8220;respiratory distress,&#8221; according to Cmdr. Tom Davis, the detachment&#8217;s chief of professional services. He said the man was breathing really fast and working hard to take each breath.

After administering a &#8220;breathing treatment&#8221; &#8212; intravenous fluids, medication and supplemental oxygen &#8212; medical team members began loading him into a local ambulance for transport to a local hospital. But as they were loading him, Davis said, the man began to have problems.

&#8220;We realized he couldn&#8217;t survive the trip to the hospital so we brought him back in and intubated him,&#8221; Davis said. After the man&#8217;s condition was stabilized, he again was loaded into the ambulance and transported to the hospital, accompanied by a Navy anesthesiologist.

Another man seen in the emergency room was Joveo, whose pelvis was broken in three places by a beam that fell on him in the school where he taught in Balakot, Pakistan, during the Oct. 8 earthquake. Twenty children died in his school, he said, adding that the quake also claimed one of his sons, his mother, father and two brothers. Joveo said in his town of Hanghari, entire families died in one of every 10 homes.

He was carried into the emergency room by several corpsmen on the bed in which he&#8217;s spent the past five weeks.

Most of the patients were seen the first day for things like fever, sore throat, earache and stomachache, according to Seaman Garrett Castro, a corpsman with Bravo Surgical Company. Whatever the problems are, Castro said, he was happy to help.