Pair to be honored for role in apprehending Frankfurt shooting suspect 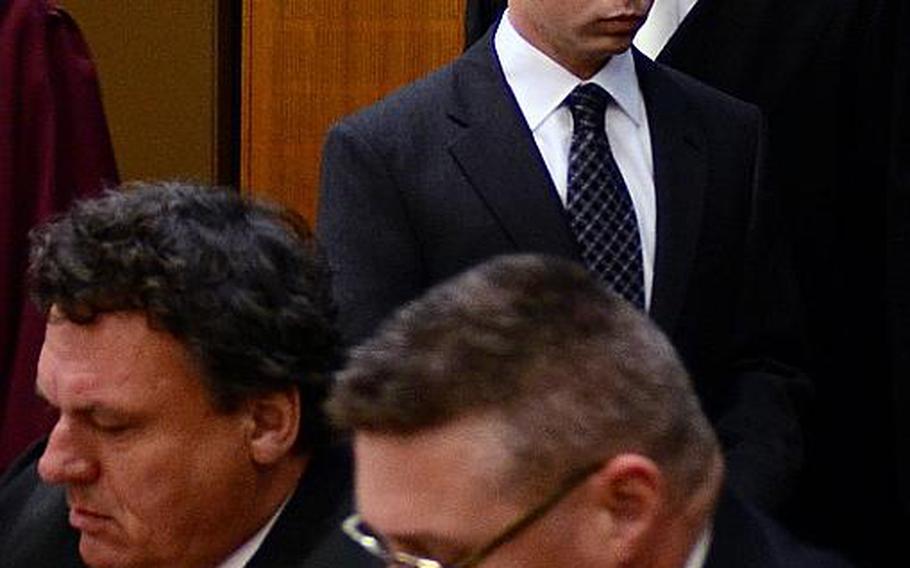 Staff Sgt.Trevor Brewer, center, prepares to testify in the trial of Arid Uka, who is charged in the shooting deaths of two U.S. airmen at Frankfurt Airport in March. Seated in the foreground at right is Robert Cuddeback, father of Airman 1st Class Zachary Cuddeback, who was killed in the shooting. Brewer and Lamar Joseph Conner are to receive merit awards from the German government for their role in apprehending the shooting suspect. (Joshua L. DeMotts/Stars and Stri)

KAISERSLAUTERN, Germany &mdash; The German government on Monday will present two Americans with Germany&rsquo;s Federal Cross of Merit in Berlin for their roles in apprehending the suspect in the shooting at Frankfurt Airport last March in which two airmen were killed.

Arid Uka, a 21-year-old Kosovo Albanian, is charged with two counts of murder and three counts of attempted murder. At the start of his trial in August, Uka confessed to killing Senior Airman Nicholas Alden, 25, and Airman 1st Class Zachary Cuddeback, 21, who was the driver of the bus that was to take a group of airmen to Ramstein en route to a deployment in Afghanistan. Uka is also charged with three counts of attempted murder. Staff Sgt. Kristoffer Schneider and Senior Airman Edgar Veguilla were wounded in the March 2 shooting. When Uka pointed the gun at another airman, Staff Sgt. Trevor Brewer, 23, the gun jammed.

During the trial, Brewer testified that, after the gun jammed, he pursued the fleeing gunman and chased him into the airport, where he saw Uka surrounded by airport police.

On Monday, German Interior Minister Hans-Peter Friedrich is to present Brewer and Lamar Joseph Conner, an American who appears to have no connection to the U.S. military, with the federal cross of merit for &ldquo;extraordinary efforts against an Islamist motivated terrorist deed,&rdquo; according to a ministry press release.

When he confessed to the shooting, Uka told the court he was influenced by jihadist propaganda on the Internet.

Uka&rsquo;s trial is scheduled to end Jan. 19 with judgment and sentencing. x