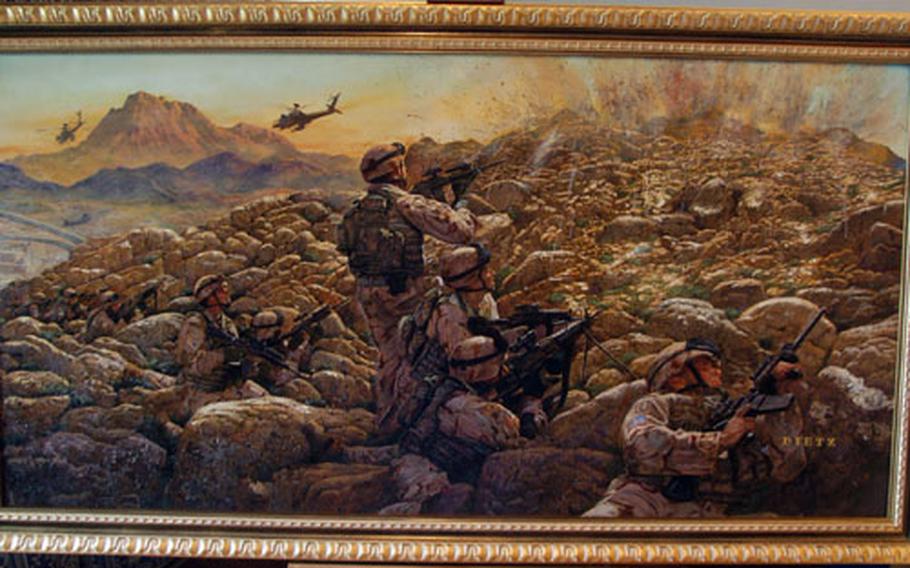 James Dietz’s painting “Sky Soldiers in Contact” was unveiled Thursday at Caserma Ederle in Vicenza, Italy. The painting was commissioned to memorialize the 173rd Airborne Brigade’s service in Afghanistan in 2005 and 2006. (Kent Harris / S&S)

James Dietz’s painting “Sky Soldiers in Contact” was unveiled Thursday at Caserma Ederle in Vicenza, Italy. The painting was commissioned to memorialize the 173rd Airborne Brigade’s service in Afghanistan in 2005 and 2006. (Kent Harris / S&S) 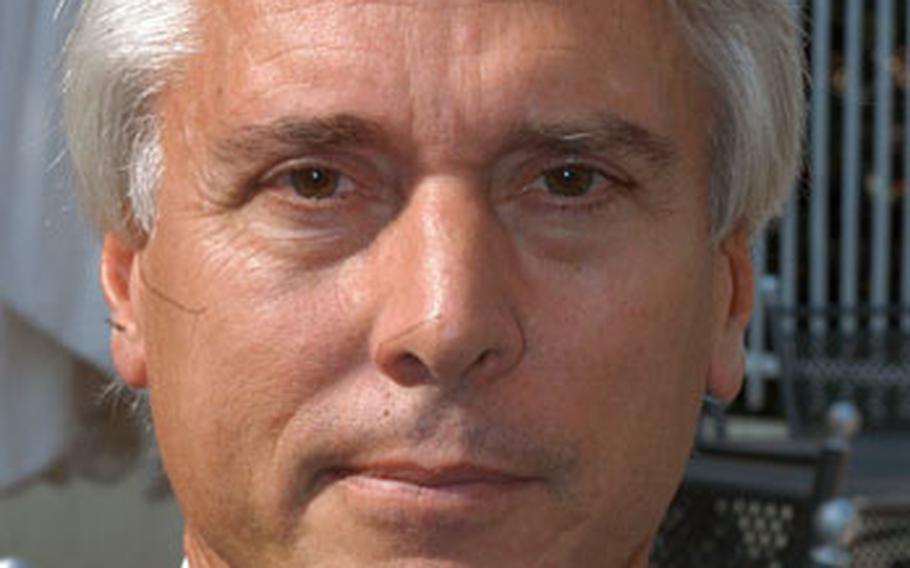 VICENZA, Italy &#8212; A year in Afghanistan appears to have given soldiers in the 173rd Airborne Brigade a new appreciation for art.

Especially a stylized piece depicting the unit&#8217;s time spent there.

Hundreds of soldiers plunked down $70 each Thursday to get prints of a James Dietz painting titled &#8220;Sky Soldiers in Contact.&#8221;

Command Sgt. Maj. Arthur McCann said the original would soon be hanging in the brigade&#8217;s headquarters.

He said almost all of the 850 first-edition prints have already been sold. About 800 had been ordered before Thursday&#8217;s unveiling.

The sale of the prints covered the cost of the painting.

Dietz, who lives near Seattle, has become one of America&#8217;s foremost contemporary artists when it comes to depicting the military on canvas. He&#8217;s painted dozens of scenes for Army units based in the States and abroad. It&#8217;s the fourth time he&#8217;s painted something for the 173rd or its two infantry battalions.

This painting is a bit different in that it doesn&#8217;t depict a specific historical event, Dietz said. Since the Sky Soldiers were spread out under various commands hundreds of miles apart, the brigade wanted something as inclusive as possible.

The result is a scene featuring a group of soldiers assaulting a rock-strewn hilltop, with a pair of Apache helicopters and a Chinook hovering nearby. A forward operating base, like the ones the soldiers lived in, is in the background.

Dietz wasn&#8217;t in Afghanistan, but was given hundreds of digital photographs from soldiers who were. He said the advent of such technology gives artists a treasure trove of information to rely on to get things right.

Dietz said he&#8217;s not concerned that such technology will put him out of business.

Paintings, he said, can often bend reality as artists put more into a picture than could normally be seen. The FOB and helicopters in his newest painting are examples. Dietz said that rightly or wrongly people generally think painters put more effort into a specific piece than photographers do, lending paintings more weight.

The 59-year-old artist never served in the military. He received a medical deferment in 1969, the year he graduated from the Art Center College of Design in Southern California. After starting out on book covers and advertisements, he spent much of the last two decades working on various projects for the military. He credits then-Col. David Grange &#8212; who later commanded the 1st Infantry Division &#8212; with getting him involved by commissioning pieces for the 75th Ranger Regiment.

That doesn&#8217;t include his son, 1st Lt. Ian Dietz. The younger Dietz is a platoon leader with the 2nd Battalion, 503rd Infantry Regiment in Vicenza and served much of his time during the brigade&#8217;s stint in Afghanistan at a small FOB in the mountains of Zabul province.

He was one of the many Sky Soldiers on hand for the unveiling Thursday.