San Diego Padres pitcher Tyson Ross and his girlfriend, Ashley Hoffman, assemble care packages for deployed troops, Wednesday at Petco Park. Mercury Insurance worked with the Padres to put together and send 1,000 packages to Marines and sailors with I Marine Expeditionary Force. (Jennifer Hlad/Stars and Stripes)

San Diego Padres pitcher Tyson Ross and his girlfriend, Ashley Hoffman, assemble care packages for deployed troops, Wednesday at Petco Park. Mercury Insurance worked with the Padres to put together and send 1,000 packages to Marines and sailors with I Marine Expeditionary Force. (Jennifer Hlad/Stars and Stripes) 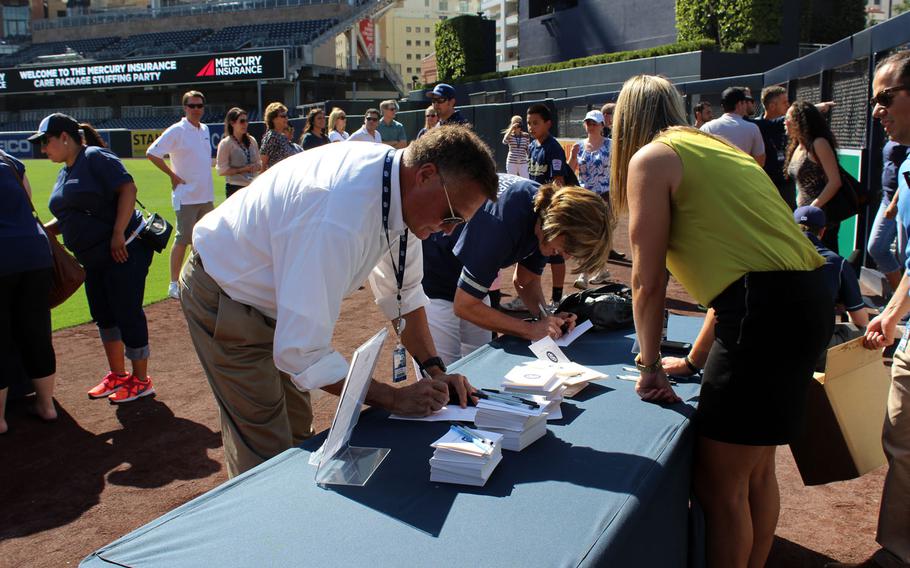 J.J. Quinn, a military advisor for the San Diego Padres, writes a note to deployed troops during a care package packing party Wednesday at Petco Park. Players and Padres staff worked with an insurance agency to assemble and send 1,000 care packages to deployed Marines and sailors with I Marine Expeditionary Force. (Jennifer Hlad/Stars and Stripes)

SAN DIEGO — Seven years after a Marine mother learned that some of her son’s battle buddies weren’t receiving any mail, a grass-roots effort to support the troops has grown into a partnership with a Major League Baseball team that has produced more than 3,000 care packages.

On Wednesday, players and management of the San Diego Padres, as well as several employees of Mercury Insurance, gathered on the field at Petco Park to put together 1,000 baseball-themed care packages for the deployed Marines and sailors of I Marine Expeditionary Force. Each box contained a baseball, a Padres hat, shampoo, lotion, toothpaste, dental floss, socks, Cracker Jack popcorn, beef jerky, a razor, a Padres bag and a personal note.

Supporting the military is part of the team’s long-term identity, said Tom Seidler, a member of the Padres’ ownership group.

The team was the first national sports team to have an annual military appreciation day, and in 2008 began wearing camouflage jerseys for every Sunday home game. The current camouflage jersey uses the Marine Corps’ digital pattern in desert colors.

“We are always looking for new and different ways” to show our support, Seidler said, and assembling care packages is simple and fun.

In 2008, Monica Nungaray’s son was serving in Afghanistan when he told her that some of his fellow Marines had not received any mail or care packages. Nungaray and one of her co-workers at Mercury Insurance organized a “packing party” and sent 80 packages that year.

The party grew annually, and in 2014, the insurance company began partnering with the baseball team to send baseball-themed packages.

Staff Sgt. John Jackson was the recipient of one of those boxes last year at Camp Leatherneck, Afghanistan. This year, he helped pack boxes for his fellow Marines.

The self-described “huge baseball fan” roots for the St. Louis Cardinals, but said he appreciated the care package from the Padres.

“It definitely means a lot,” Jackson said. “It’s great to get anything baseball related.”

Ian Kennedy, one of the Padres’ starting pitchers, helped pack boxes last year and asked to be included this year as well.

He also brought his three young daughters — the oldest is 4 — to participate, because he said he wants to teach them about helping others and what it means to serve.

Kennedy’s brother-in-law is in the Navy and recently got stationed in San Diego, and he said he tries to do as much as he can to support the military.

“We don’t forget about them when they’re gone,” he said.

The items in the care packages were provided by the insurance company, and Kevin Kellum, a claim specialist with Mercury, said it’s just “a way for us to say thank you to Marines and sailors serving today.”

Kellum is an Army veteran who has served since 2000 and remains in the Army Reserve. He said he knows how nice it can be to receive a personal note and care package while deployed, “to know someone is thinking about you.”

Carla and Jim Hogan, whose son, Donald, was killed in Afghanistan in 2009, also participated by providing socks for the care packages. Lance Cpl. Donald Hogan was walking on a road with his squad in southern Afghanistan when he saw an IED trigger string. He called out a warning to his fellow Marines and shoved the man who was closest to the bomb, saving the squad but sacrificing himself. He received the Navy Cross for his actions.

After their son’s death, they kept in touch with his squad mates, Carla Hogan said, and noticed that they were always asking for socks. The Hogans created an organization called Socks for Heroes and have now shipped 355,000 pairs of socks to troops overseas.