The Sasebo-based USS Essex, transits the Philippines Sea on Friday to take part in Exercise Balikatan 2006. But along with the USS Harpers Ferry and personnel from the Okinawa-based 31st Marine Expeditionary Group, the Essex changed plans to provide assistance to the victims of a recent landslide in Southern Leyte. (Adam R. Cole / U.S. Navy)

The Sasebo-based USS Essex, transits the Philippines Sea on Friday to take part in Exercise Balikatan 2006. But along with the USS Harpers Ferry and personnel from the Okinawa-based 31st Marine Expeditionary Group, the Essex changed plans to provide assistance to the victims of a recent landslide in Southern Leyte. (Adam R. Cole / U.S. Navy) 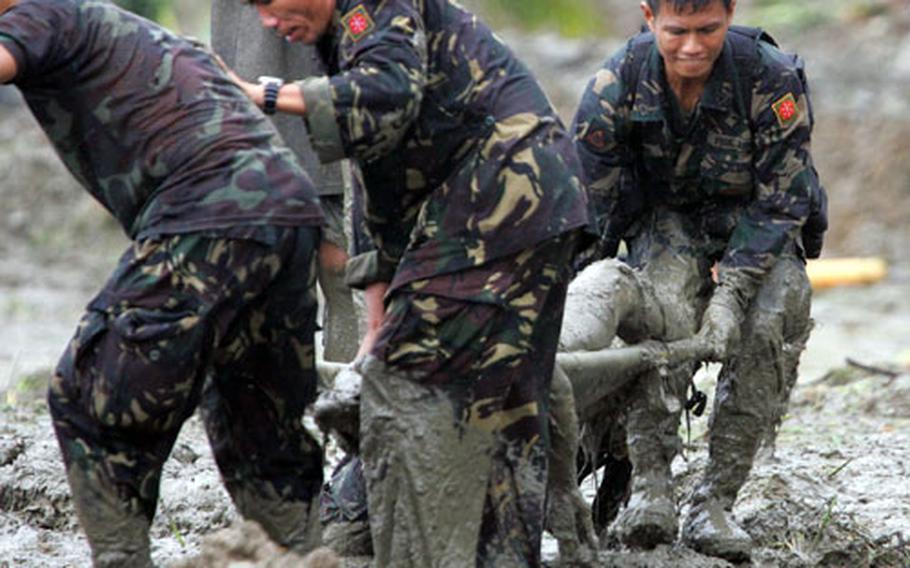 Philippine soldiers carry a body onto a stretcher after being dug up Saturday. (Bullit Marquez / AP)

Two U.S. warships carrying about 4,000 servicemembers and 22 helicopters steamed Saturday toward the eastern Philippines to provide medical assistance and other support at the scene of Friday&#8217;s deadly mudslide in southern Leyte.

An estimated 1,800 people are feared dead by the landslide that swallowed the farming village of Guinsaugon in St. Bernard town about 400 miles east of the capital, Manila. Of the town&#8217;s population of 1,857, 53 survivors were counted and 23 bodies found, the Associated Press reported Saturday. The mud in some places appeared 30 feet deep. It buried all but four of more than 300 homes in the area and an elementary school in session, according to local news reports.

The Essex and Harpers Ferry arrived in the Philippines Friday for the annual bilateral &#8220;Balikatan&#8221; exercise with the Philippine military, according to U.S. military officials. The two ships broke away from the Amphibious Ready Group after the Philippine government requested U.S. assistance. It&#8217;s &#8220;fortunate that we are in close proximity to our friends and family in the Philippines so we can quickly react during such a disaster,&#8221; said Lt. Edward Sisk, Command Task Force 76 spokesman.

The Amphibious Ready Group, which operates out of Sasebo Naval Base, Japan, also was comprised of the USS Juneau for Balikatan, Sisk said. &#8220;We don&#8217;t know how bad the situation is right now,&#8221; he said.

The ships will provide &#8220;food, water, shelter materials and unfortunately in this case body bags and medical assistance,&#8221; Brig. Gen. Dana Atkins, PACOM director of operations, was quoted as saying in a news report Saturday on station KGMB 9 in Hawaii.

The Los Angeles Times also reported the Essex and Harpers Ferry are carrying thousands of gallons of water purification equipment, generators and blankets.

The two U.S. ships, once on scene, will serve as sea bases from which heavy lifting can be initiated, Sisk said. The Essex includes a full range of hospital capabilities and is transporting four CH-53E helicopters and eight CH-46 helicopters, he noted. Both ships also are carrying three Landing Crafts Air Cushioned, or LCACs, to quickly move cargo and personnel from ships to shore and back.

&#8220;This is the same configuration used to provide more than 6 million pounds of relief assistance ... after the tsunamis in Indonesia,&#8221; Sisk said.

PACOM officials said Saturday that more U.S. troops and assets from Balikatan could be diverted if requested by the Philippine government and approved by the Defense Department.

Balikatan, which means &#8220;shouldering the load together&#8221; in the Philippine language, is an annual exercise involving the Republic of the Philippines and the United States. This year&#8217;s exercise, the 22nd, is to begin Monday.

About 5,500 U.S. troops and 2,800 from the Philippines were scheduled to participate, according to a news release from the Joint United States Military Advisory Group-Philippines.

Pentagon officials said Friday that ground forces in the Philippines for the exercise included those from the Guam National Guard, 3rd Marine Expeditionary Force and U.S. Army Pacific. U.S. Air Force transport planes also were there.