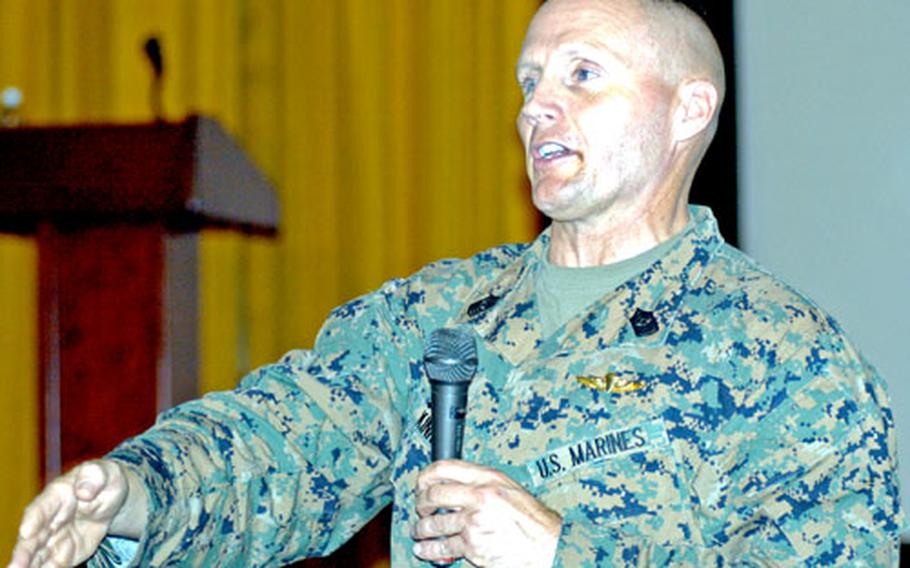 MISAWA AIR BASE, Japan &#8212; U.S. Pacific Command&#8217;s top enlisted leader thanked airmen and sailors here Tuesday for their service during a time of war and encouraged them to demand responsibility from their supervisors and assign leadership roles to younger troops.

&#8220;There&#8217;s kind of a renaissance now going on at the Department of Defense on the importance of the noncommissioned officer and leadership at the lowest level,&#8221; said Marine Corps Sgt. Maj. William T. Kinney during an enlisted call at the Richard Bong Theater.

For instance, Kinney said, airmen in Iraq are working closely with Marines.

Kinney, on his second Japan visit since assuming his current duties, wrapped up a nine-day swing through the country Tuesday after stops at Camp Zama, Osaka and the USS Blue Ridge at Yokosuka Naval Base.

Among the topics Kinney spoke to Misawa troops about were PACOM&#8217;s current force structure, its mission and strategic importance and threats to the region.

And in an effort to promote security and stability throughout the Pacific theater, PACOM is working with some allied nations to help develop their enlisted corps, including Japan and Mongolia, Kinney said.

&#8220;They are going to implement the command sergeant major program within that army on a test basis,&#8221; Kinney said.

On issues closer to home, he said the recent appointment of the first senior enlisted adviser to the Joint Chiefs of Staff chairman should give all enlisted troops a louder voice at the Pentagon. Earlier this year, Joint Chiefs Chairman Marine Gen. Peter Pace selected Army Command Sgt. Maj. William J. Gainey for the job.

Kinney thinks Pentagon decision makers need to address several servicemember issues, including the military pay scale that&#8217;s based on time in service rather than time in grade; no dislocation allowance for retiring personnel; a rule that allows compensation for shipping only one private vehicle to duty stations in Guam and Hawaii; and the discontinuation of a pay raise at 28 years in-service.

One Misawa servicemember suggested the current &#8220;use-or-lose&#8221; policy also needs to be changed. Many people can&#8217;t take their accrued leave because they&#8217;re either deployed or covering for someone at their home base who&#8217;s deployed, he said, adding: &#8220;I don&#8217;t think people should have to lose leave with no recompensation whatsoever when they&#8217;re sacrificing for their nation.&#8221;