PACOM has a pint-size problem 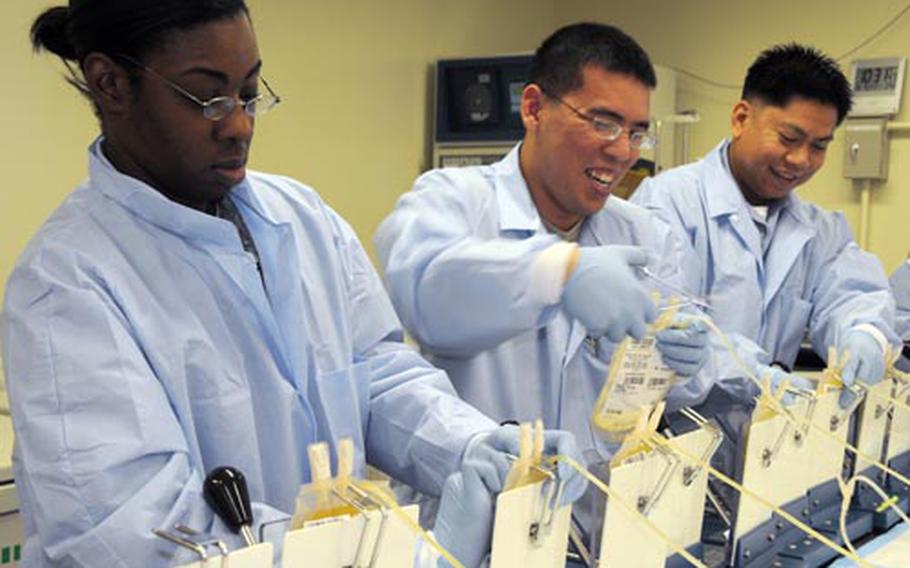 Spc. Dana Thomas, left, 28, from Chicago, and other lab technicians massage packs of plasma to defrost them at the Armed Services Blood Bank Center on Camp Lester, Okinawa. In addition to plasma, the center also produces platelets and cryoprecipitate-rich plasma from blood donations. The center, which supports all U.S. Pacific Command’s blood needs, says it gets harder every year to fill the bank as the pool of available donors continues to shrink due to overseas deployments. (Cindy Fisher / S&S)

The center, which supports all U.S. Pacific Command&#8217;s blood needs, says it gets harder every year to fill the bank as the pool of available donors continues to shrink due to overseas deployments. To continue to support the U.S. Pacific Command&#8217;s more than 185,000 beneficiaries, the center needs more people to donate blood regularly, said the center&#8217;s director, Cmdr. Rich Hayden.

The center is responsible for screening potential donors, drawing blood, testing it for disease, separating it into various blood byproducts and then storing them before they are used at one of PACOM&#8217;s 18 medical facilities. The center ships between 4,000 to 5,000 blood product units annually and collects about 5,000 units during that same time, Hayden said.

In past years, shortages have forced the center to request support from stateside centers, Hayden said. To prevent that, people here are urged to become regular donors, he said.

About 95 percent of the blood drives are done on Okinawa, said center spokeswoman Kimberly Reed.

Hayden said about 2,000 regular donors on Okinawa provide most of the donated blood for the Pacific Command.

Marines between 18 to 24 compose 34 percent of the donators, Hayden said.

However, increased deployments are cutting into the pool of available donors, he said. Also, travel to certain countries, getting tattoos and other factors can make people ineligible to donate for a certain period.

Because 42 percent of the population is Type O and 38 percent is Type A, there is a greater need for these two blood types, Hayden said.

Type O-negative, which can be transfused into anybody, is always in great demand, Hayden said.

Anyone 18 or older can donate every 56 days, and 17-year-olds who are still dependents can donate with parental permission.

"When a loved one needs blood, we are depending on the altruism of other people to be generous and caring," Hayden said.

Donations may be made during unit-sponsored blood drives or at the center from 8 a.m. to 4 p.m. Monday through Friday.

The next blood drives are scheduled to be off-island at Yokota Air Base in mainland Japan from Sept. 22-24 and at the USS George Washington from Sept. 28-29.

The following are disqualifiers for blood donation:

Returned from Iraq/Afghanistan in the last 12 months.Been to the area north of Seoul within the past two years.Lived in Europe for six months or longer or the United Kingdom for three months or longer from 1980 to 1996.Lived in Eastern or Western Europe &#8212; excluding the United Kingdom &#8212; or the Middle East from 1980 to the present for an amassed period of five years.Traveled recently to a malaria-endemic area as defined by the Food and Drug Administration.Had a body piercing, acupuncture or blood-product transfusion within the past 12 months (this does not apply in some states, speak with center staff for more information).Had a tattoo or permanent makeup outside the U.S.Engagement in high-risk behavior or intimate contact with anyone at risk for AIDS.History of hepatitis after age 11.Pregnant within the last six weeks.History of cancer.Donated blood in the last 56 days.Source: Armed Services Blood Bank Center