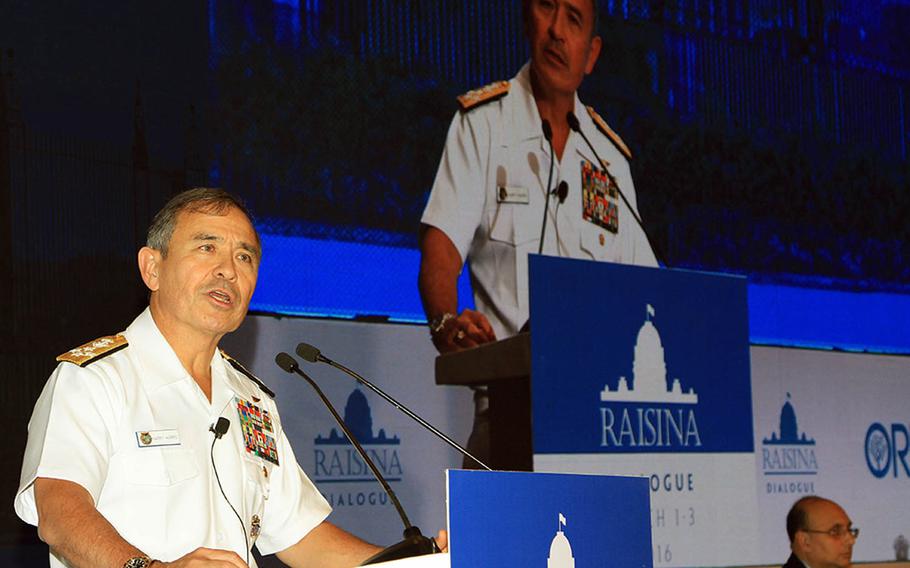 Adm. Harry Harris, U.S. Pacific Command commander, speaks at the inaugural Raisina Dialogue in New Delhi, India, in 2016. At this year's conference, Harris said cooperation between the U.S. and India is "so upward, it's through the roof." (Courtesy of U.S. Embassy New Delhi)

Adm. Harry Harris, U.S. Pacific Command commander, speaks at the inaugural Raisina Dialogue in New Delhi, India, in 2016. At this year's conference, Harris said cooperation between the U.S. and India is "so upward, it's through the roof." (Courtesy of U.S. Embassy New Delhi) 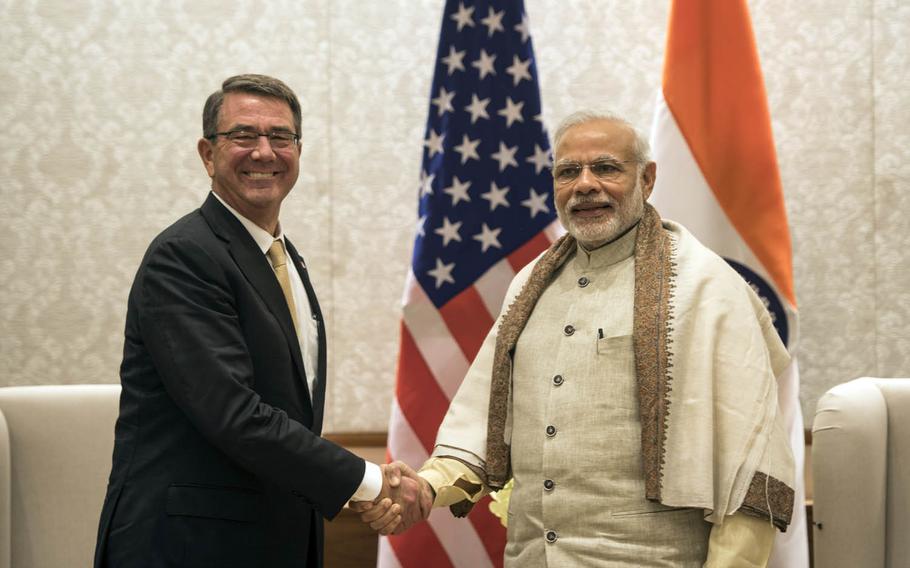 India is growing closer as a partner in keeping seas free to navigation at a time of mounting tensions over territorial rights in Asia, the United States Pacific commander said this week in New Delhi.

Adm. Harry Harris also stressed the importance of finalizing two bilateral agreements with India that would boost intelligence sharing, during a keynote speech Wednesday at the Raisina Dialogue, a forum organized by India’s Ministry of External Affairs and the Observer Research Foundation think tank.

Cooperation with India is “so upward, it’s through the roof,” Harris said.

“With its commitment to improving its defense capabilities and modernizing its forces, India has demonstrated it has skin in the game.”

The Communications Compatibility and Security Agreement, or COMCASA, would allow mutual access to secret technologies and encrypted communications. The U.S. had previously prevented some advanced technology sales to India; COMCASA would clear the way.

The second agreement, the Basic Exchange and Cooperation Agreement for Geospatial Information and Services Cooperation, would allow the military and civilian sectors to exchange planetary location and topographic data.

Harris is an outspoken critic of China’s attempts at controlling the waters and airspace of the South China Sea, the majority of which is viewed by the U.S. and other nations as global commons under international law.

Harris said China would not be allowed to close down shared domains, particularly in light of the artificial islands it has constructed and militarized in the South China Sea.

“I say this often but it’s worth repeating,” he said. “We will cooperate where we can and be ready to confront where we must.”

India does not claim territory in the South China Sea, but tensions there lead others in the region to view the country as a strategic counterweight, according to a report last year from the Brookings Institution, a public policy think tank.

India and the U.S. have also shared information on increased Chinese submarine and ship activity in the Indian Ocean, Harris said Wednesday, according to Indian media reports.

Harris emphasized the two nations’ mutual commitment to supporting the peaceful resolution of disputes, as well as freedom of navigation and overflight for militaries and civilians.

“These principles are not abstractions, nor are they subject to the whims of any one country,” he said. “They make sense because they have worked for decades to keep the peace while creating prosperous economic conditions to lift more than a billion people out of poverty.”

Defense Secretary Ash Carter called India a “major defense partner” during a meeting last month with the country’s defense minister. That designation, created solely for India, puts it “on par with our closest, older allies, and makes practical transactions now possible,” he said.

Military cooperation with the U.S. is a balancing act for India, which maintained a nonaligned posture during the Cold War. It maintains that same stance with its powerful neighbor, China; however, India’s military ties have grown stronger over the past decade with America, which is now the nation’s top weapons supplier.

Harris said the region’s top challenges also include Islamic State-sponsored or -inspired terrorism. More than 700 died and 3,200 were injured in terrorist attacks within India since 2005, according to a government report last year.

Harris also pointed to Russia seeking to regain lost power and influence in Asia as a potential concern.

Meanwhile, North Korea leader Kim Jong Un, “a vain, vicious and volatile dictator with his fingers on a nuclear trigger,” remains a threat to peace, he said.