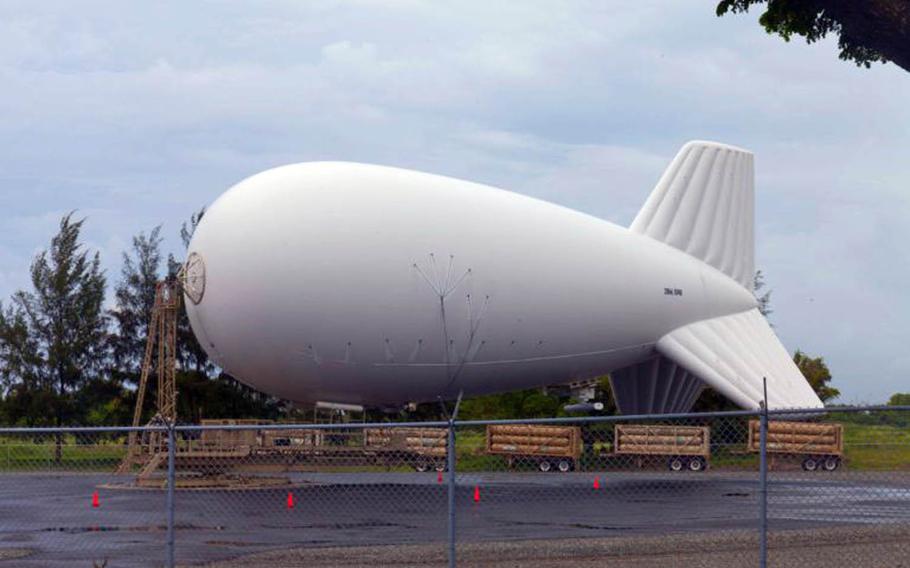 The United States formally handed over a tethered radar balloon system to the Philippines navy, Tuesday, Aug. 22, 2017, during a ceremony at the Naval Education and Training Command in Zambales, Philippines. (Courtesy of U.S. Embassy in Mani)

America’s top Pacific commander has wrapped up a two-day visit to the Philippines, where he met with President Rodrigo Duterte and top military officials to discuss regional threats and an ongoing jihadist siege in the nation’s south.

Adm. Harry Harris met Wednesday with Duterte at Malacanang Palace, the president’s official residence and primary workplace, where they talked about further U.S. support to help end the conflict in the southern city of Marawi, said a statement by the U.S. Embassy in Manila.

Harris’ meetings with the Philippine defense secretary and chief of staff of the armed forces focused on upcoming bilateral U.S.-Philippine military engagements and military aid, the statement said.

Harris also traveled to Mindanao, the southern island province where Marawi is located, to meet with that region’s top military commander.

Marawi has been under a three-month siege by jihadist terrorists. Philippine forces recently recaptured the city’s main mosque, where gunmen had been holding hostages.

For the past 15 years, U.S. special operations personnel have rotated through Mindanao, where they have trained Philippine troops and provided sophisticated surveillance of terrorist groups.

Earlier in the week, the U.S. transferred a high-tech radar balloon to the Philippines intended to help the country monitor maritime and air traffic within its coastal waters.

Formally called the 28M Class Tethered Aerostat Radar System, the balloon is used for low-level radar surveillance. Federal agencies in the U.S. use the system along the Mexican-American border, the Straits of Florida and the Caribbean, primarily to intercept illegal drugs.

The balloon was turned over to the Philippine Navy Tuesday by Col. Ernest Lee, chief of the Joint U.S. Military Assistance Group in the Philippines, the statement said. It will be based at the Naval Education and Training Command in the coastal province of Zambales, northwest of Manila.

The transfer was part of the U.S. Maritime Security Initiative, which is used to build the maritime capacity of Southeast Asian countries.

The Philippines faces challenges to maritime security on several fronts.

Maritime activities by the jihadist group Abu Sayyaf pose a threat to regional trade and commerce, Zachary Abuza, a Southeast Asia security expert, told a U.S. House subcommittee on foreign affairs in May.

Between March 2016 and April 2017, the group was responsible for 19 maritime incidents and hostage takings, including one attempted attack, he said.

Meanwhile, Chinese vessels recently encroached on the Philippine-held island of Pagasa, which is part of the disputed Spratly Island chain. China has asserted sovereignty over the Spratlys, claims disputed by the Philippines and other countries in the region.

About 100 Filipinos live on Pagasa, the Philippines’ largest occupied outpost in the Spratlys.

“The Chinese may have a sinister plan to occupy sandbars just west of Pagasa that belong to us,” Alejano told a Philippine newspaper.

The Asia Maritime Transparency Initiative, run by the Washington, D.C.,-based think tank Center for Strategic and International Studies, confirmed with its own satellite images that nine Chinese fishing ships and two naval or law enforcement ships were in the vicinity on Aug. 13, with cloud cover possibly obscuring others.

“The fact that law enforcement and naval vessels accompanied the fishermen makes it clear that this was not done without Chinese authorities being aware,” the AMTI said on its website.

“At best, they permitted their operation. At worst, they escorted and guarded them. The number and rapid coordination of naval and coast guard ships suggests that this was purposely organized in advance and was not just an ad hoc response by government vessels that happened to be in the area.”

Manila has plans for a $32 million upgrade to Pagasa, including repairs to its decaying runway.