Buy Photo
Adm. Harry Harris takes his seat at the witness table before testifying at a House Committee on Armed Services hearing on Capitol Hill in Washington, D.C., on Wednesday, April 26, 2017. At the hearing, Harris, the commander of U.S. Pacific Command, took blame for recent confusion over the whereabouts of the USS Carl Vinson. (Carlos Bongioanni/Stars and Stripes)

Buy Photo
Adm. Harry Harris takes his seat at the witness table before testifying at a House Committee on Armed Services hearing on Capitol Hill in Washington, D.C., on Wednesday, April 26, 2017. At the hearing, Harris, the commander of U.S. Pacific Command, took blame for recent confusion over the whereabouts of the USS Carl Vinson. (Carlos Bongioanni/Stars and Stripes) 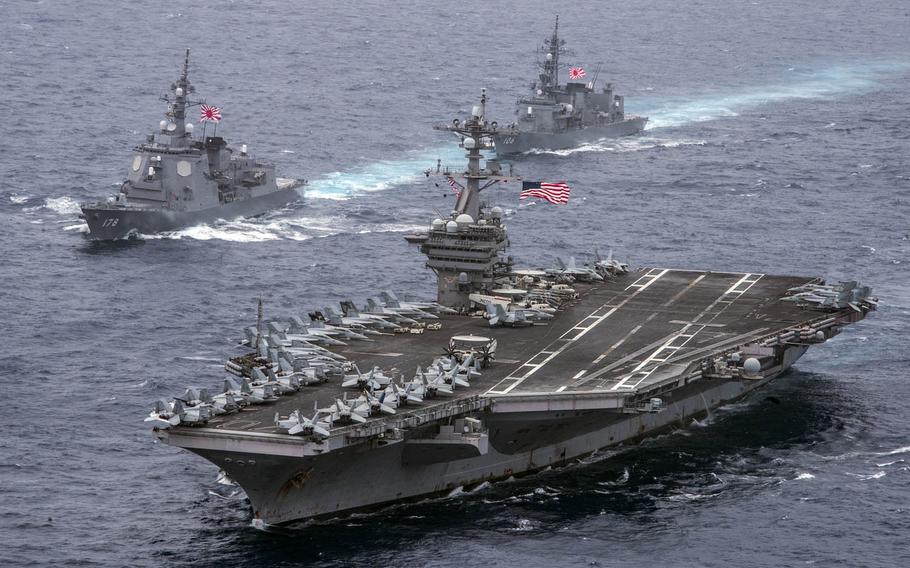 The head of U.S. Pacific Command said Wednesday that the USS Carl Vinson carrier strike group is now in “striking range” of North Korea if called upon, adding that he was responsible for recent confusion over when and how quickly the group would reach the Korean peninsula.

The aircraft carrier “sits in the Philippine Sea just east of Okinawa in striking range, in power-projection range, of North Korea, if called upon to do that. And then in a few days I expect it will continue to move north,” Adm. Harry Harris told the House Committee on Armed Service during testimony.

“It’ll be there a few days, and then it will leave port and be operating in the area,” Harris said. “This is a show of solidarity with our South Korean allies and a flexible deterrent show of force to North Korea, should they consider using a force against South Korea.”

On April 9, PACOM announced that Harris had canceled the Carl Vinson’s planned port visit to Australia, ordering it and its accompanying vessels “to sail north and report on station in the Western Pacific Ocean.”

A combination of statements from military officials, the White House and media reports led many to believe the ship was immediately headed toward the Korean peninsula.

However, a week after departing Singapore, photos from the Navy’s website showed Carl Vinson near Indonesia, about 3,500 miles from North Korea.

“With regard to the Carl Vinson, that’s my fault on the confusion, and I’ll take the hit for it,” Harris said.

A U.S. official told a Reuters defense reporter shortly before the release that the carrier and its accompanying ships were diverted for North Korea, though the initial PACOM announcement didn’t specify the destination.

President Donald Trump then told a reporter the military was sending “an armada” to the Korean peninsula in light of growing tensions with North Korea.

In the days after Harris’ initial order, a PACOM spokesman, while issuing a follow-on statement about the Vinson deployment to the Western Pacific, added criticism of North Korea’s regime.

While PACOM officials later said they told those who asked that the strike group was completing exercises with the Australians before moving north, PACOM did not release a follow-on public statement to that effect.

“So, I made the decision to pull the Carl Vinson out of Singapore, truncate the exercise it was going to do south of Singapore, cancel its port visit to Australia, then proceed north,” Harris said. “Where I failed was to communicate that adequately to the rest of the media. That is all on me.”