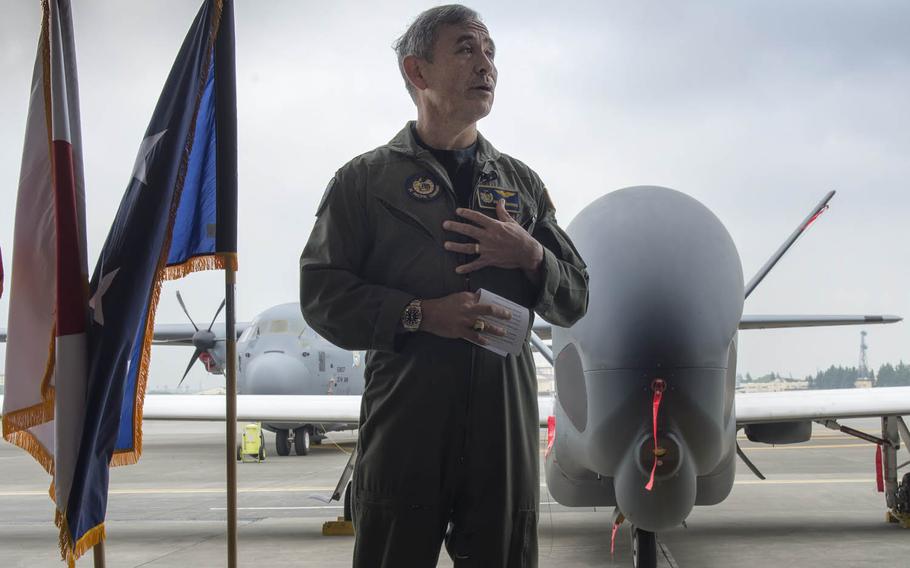 YOKOTA AIR BASE, Japan — Standing in front of one of America’s largest unmanned aircraft, Pacific Command chief Adm. Harry Harris told troops at the U.S. Forces Japan headquarters that the Asia-Pacific region is a priority for Washington.

“We’re sending our best and newest assets to Japan, whether we’re talking C-130s, F-35s at [Marine Corps Air Base] Iwakuni, or the ships in Yokosuka [Naval Base],” Harris told hundreds of servicemembers gathered Monday at Yokota in western Tokyo, a USFJ statement said.

“All these capabilities are coming to the Western Pacific, principally Japan, and that speaks highly of the work we do with our Japanese allies,” he added.

Harris is in Japan on a three-day visit that includes meetings with Japanese Defense Minister Tomomi Inada and Prime Minister Shinzo Abe to discuss the alliance, the international response to North Korean provocations and trilateral cooperation between the U.S., Japan and South Korea.

The RQ-4 Global Hawk that served as a backdrop to Harris’ speech is one of five operating out of Yokota on a five-month deployment. Experts have said the surveillance drones could be useful tools for keeping tabs on North Korea, which tested another missile Sunday and sparked condemnation from American, South Korean and Japanese leaders.