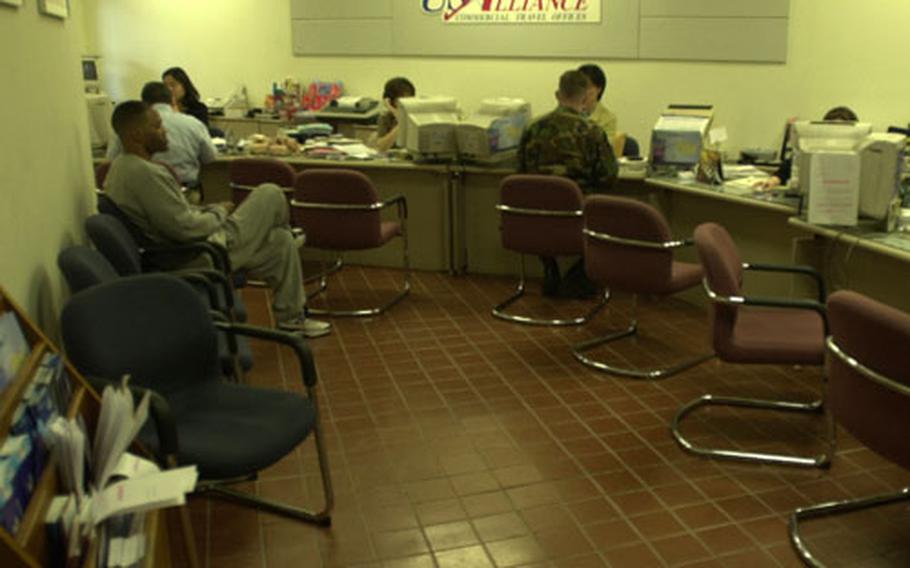 The US Airline Alliance office&#39;s waiting room has just a few customers purchasing tickets. The office usually is very busy but business seems to have slowed. Possibly contributing to the slow-down: the travel ban imposed because of SARS. (Greg L. Davis / S&S)

YONGSAN GARRISON, South Korea &#8212; Servicemembers and their families are canceling trips to China and Hong Kong after Pacific Command banned travel to those countries due to the spread of a mysterious illness, officials announced Thursday

No SARS cases have been reported on any U.S. base in Japan or South Korea, medical officials said Thursday.

The decision to ban travel was based on force protection concerns, said Lt. Col. Lee Hee-choon, a physician and chief of clinical preventive medicine for the 18th Medical Command at Yongsan Garrison, South Korea. Lee said he didn&#8217;t know how long the ban would be in effect, although it would depend upon how well the epidemic is brought under control.

The ban covers official and unofficial travel, and passengers have been changing their plans.

Travel to Singapore and Vietnam are permitted, &#8220;but individuals should take the following precautions,&#8221; U.S. Forces Japan advised: &#8220;Avoid crowds or personnel that are coughing or have flu-like symptoms; wash hands often.&#8221;

The agency runs tours to China and Hong Kong, although Lee said the Hong Kong tour has not been popular lately.

A group tour was scheduled to leave Saturday to China, although people at U.S. military bases throughout South Korea have canceled. Their tickets are refundable, Lee said, but the Chinese visa fee is not.

The outbreak already has affected the travel industry in Okinawa. Travel agents on the military bases report a flood of cancellations.

Ragga Evans, manager of Omega World Travel on Camp Foster, reported about 50 canceled trips to China in the past week. So far, about 90 people, including some Americans, have called off their tours to Southeast Asia, mainly to Hong Kong and Bangkok, said Seijun Sunagawa, executive director of HIS Kanehide Travel in Naha.

&#8220;The cancellations picked up yesterday after WHO announced its travel advisory,&#8221; he said, adding that HIS handles about 15 reservations per week to China and Hong Kong.

Surprisingly, overseas spring break tours to China are still on from Yokosuka Naval Base, Japan.

About 22 of 30 people canceled because of SARS and the war with Iraq, Soriano said.

Passengers entering South Korea are being given health questionnaires, asking if they have SARS symptoms, said Kim Ji-young of Incheon International Airport&#8217;s quarantine office. All passengers must write their names and phone numbers down so they can be tracked later if they develop SARS, Kim added.

About 2,000 people come to South Korea every day from China, Singapore, Vietnam, China and Hong Kong, said Hwang Ji-young, who works in Infectious Disease Control Division of the Korea National Institute of Health. It&#8217;s probably only a matter of time before SARS comes to South Korea, Hwang said. Eleven hospitals have been designated to prepare if the disease reaches South Korea, she said.

The Centers for Disease Control and the World Health Organization have issued travel advisories for China, Hong Kong, Singapore and Vietnam.

About 2,270 cases have been detected in 16 countries, according to figures published on the World Health Organization&#8217;s Web site Thursday. On Thursday, WHO reported 79 deaths worldwide.

According to the World Health Organization, SARS begins with a fever greater than 100.4 degrees Fahrenheit. Symptoms include headaches, body aches and mild respiratory symptoms. After two to seven days, SARS patients may develop a dry cough and have difficulties breathing.

It is spread by close contract with an infected person, such as family members and health care workers who do not use infection control measures.