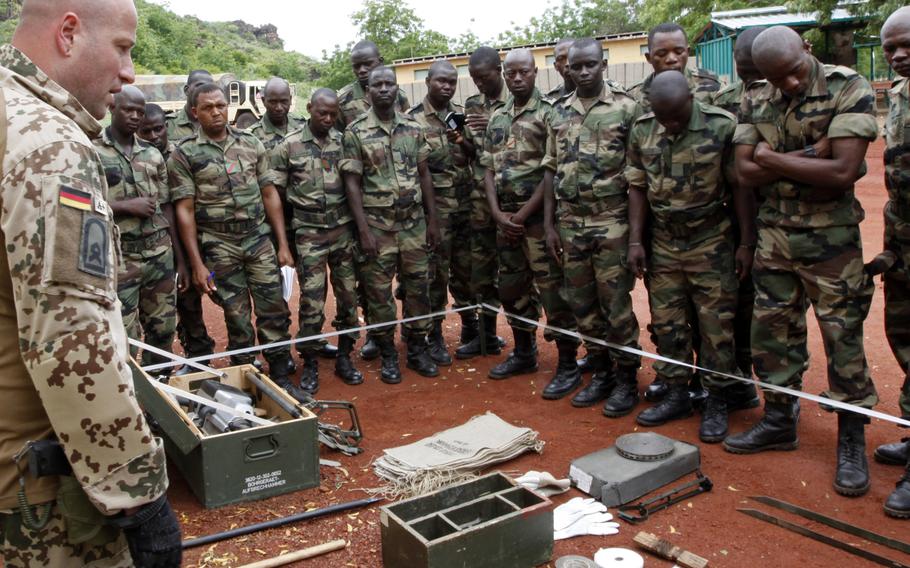 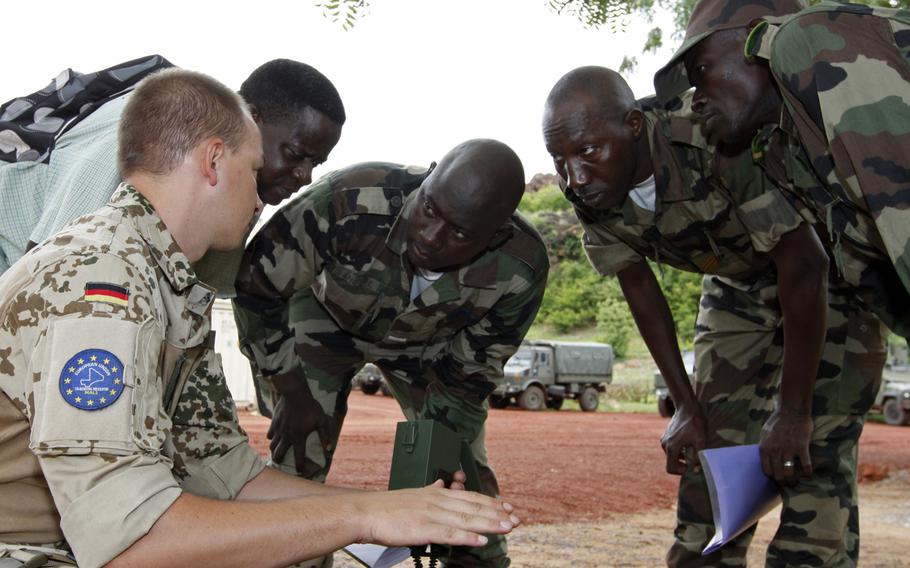 A German army soldier Explosive Ordnance Disposal trainer teaches Malian soldiers how to use mine detectors as part of the European Training Mission in Mali in July 2013. (Alyssa Bier/German army) A German soldier trains Malian soldiers to drive a seven-ton truck as part of the European Training Mission in Mali in July 2013. (Alyssa Bier/German army)

STUTTGART, Germany — A new era of security burden-sharing could be on the horizon for a war-weary U.S., with France taking an aggressive lead in Africa and Germany showing a willingness to take a more assertive role in global security matters.

Recently, Germany has begun a cautious rethink of its policy that often amounts to military abstention — it refused to participate in the NATO mission against Libya’s former strongman, for instance, and has insisted on combat restrictions for its troops deployed to Afghanistan.

“Germany must be ready for earlier, more decisive and more substantive engagement in the foreign and security policy sphere,” German Foreign Minister Walter Steinmeier told defense leaders and diplomats during the recent Munich Security Conference. While he advocated force as a “last resort,” he added, “Germany is too big merely to comment on world affairs from the sidelines.”

Although France increasingly is the face of Western interventions in African trouble spots, the Germans are pledging to contribute more toward international efforts to bring stability to places such as Mali. Thus Africa is emerging as the proving ground for Europe’s economic powerhouse as it pursues a bold new foreign policy.

‘Reluctant to use force’

Germany’s historical tendency toward pacifism and reluctance to meddle in the area of messy foreign security is born of its militaristic history, particularly Nazi Germany’s rout of Europe in World War II, German analysts say.

“We’ve been reluctant to use force and we’ve been reluctant to lead diplomatically, and it is a direct consequence of World War II. It’s justifiably rooted in the experience,” said Thorsten Benner, director of the Berlin-based Global Public Policy Institute. “Germany shouldn’t be trigger happy.”

But illustrative of the tentative change in Germany’s mind set, the country has plans to beef up a military training mission in Mali as part of an effort to bolster indigenous troops in the fight against Islamic militants. It also has pledged more logistical support to international peacekeeping efforts in the Central African Republic, where bloody religious-based fighting is stoking fears of potential ethnic cleansing.

Germany is even considering sending troops to Mogadishu as part of an effort to train forces in the virtual failed state of Somalia, where a fragile government has been in a long struggle with the terrorist group al-Shabab.

The combined effects of browbeating by frustrated allies, an increasingly tolerant public and a desire to have greater sway at the international negotiating table have led to a profound shift in Germany as decades of reflexive pacifism begin to give way, experts say.

“We have a Germany that’s been criticized now for the better part of a decade and that has sunk in,” said Jan Techau, director of the Carnegie Endowment for International Peace’s European center. “In the end, that criticism actually does produce results. People start to rethink things.”

Political leaders have recently declared that a sense of guilt over the country’s Nazi past can’t be used as a “shield for laziness” in the future.

While Germany, the undisputed economic powerhouse of Europe, has long feared foreign entanglements, it now appears eager to shake a reputation for punching below its weight in the area of security cooperation. Of late, German officials have almost sounded hawkish, if still cautious about engaging in a way that could mean a major commitment of troops in a combat zone.

However, while calling on Germany to become more active in security matters, Von der Leyen also said the European Union as a whole must do more.

“If we Europeans want to remain a credible actor in security policy, we must plan and act together,” Von der Leyen said. “European nations ought to be prepared to take over a fair share of the trans-Atlantic burden — in a combined, consensual and efficient manner.”

The U.S. has long been critical of Europe in general for not stepping up more to intervene in crises that have implications on both sides of the Atlantic. France’s recent involvement in Francophonic Africa follows from its colonial past. The country has put thousands of troops on the ground to take part in dangerous combat and peacekeeping missions in Mali and the Central African Republic, enduring casualties along the way.

To be sure, Germany’s baby steps pale compared to French and U.S. military operations across Africa.

Techau, a longtime critic of German reluctance to engage in global security challenges, says the trend of greater German involvement will likely continue with an eventual role in more direct counter-terrorism activities.

“Don’t expect it to happen next week, but I think over the mid-term that will happen at some point,” he said. “The Germans will not be able to abstain for too long. The French are answering to an urgent security need in Africa, which also is important for Germany.”

Benner also sees more German engagement occurring gradually over time. “I would say it will come to fruition slowly,” Benner said. “This is mostly to prepare the public, preemptively, that if the need arrives, Germany is ready and willing to contribute.”

Criticism from the U.S. and others over German caution has been stinging at times, notably in connection with the war in Afghanistan where NATO brass have long been critical of so-called German “caveats” that put significant restrictions on the types of operations its troops can conduct. Germany’s refusal in 2011 to take part in NATO’s mission in Libya provoked additional angst among allies. While many other nations in the alliance also didn’t take part, the major NATO players were all in: the U.S., France, the United Kingdom and Italy.

“Ever since then, especially after Libya, there has been a loss of influence for Germany within NATO and parts of the EU,” Techau said. “If you always stand on the sidelines, you lose influence.”

For Germany, part of its new-found assertiveness could be linked to the need to bolster its standing inside the European Union and keep the political alliance glued together, some experts suggest.

“Berlin believes that holding the European Union together requires adding another dimension that it heretofore has withheld in its dealing with the bloc: military-political relations,” Stratfor, the Texas-based security think tank, said in recent analysis.

Meanwhile, there also is a growing recognition that pursuing a policy of engagement in security matters doesn’t necessarily translate into repercussions from an electorate uneasy with the idea of deploying troops.

While the general public generally opposes sending troops abroad — German polls consistently show opposition to the idea of a more expeditionary military — the issue is not a major point of discussion during election season.

“I think the German political elites have learned that one of their biggest fears is unfounded — that military engagement leads to losing votes. They aren’t losing votes on this,” Techau said.

Nevertheless, German Chancellor Angela Merkel “is generally quiet on these matters, and she will not go out there and give driving forceful speeches on military issues, but there is her implicit green light in all of this,” Techau said. “She has been in power for so long now, she knows exactly what she can get away with.”