Pace's visit to Pakistan takes him to earthquake zone 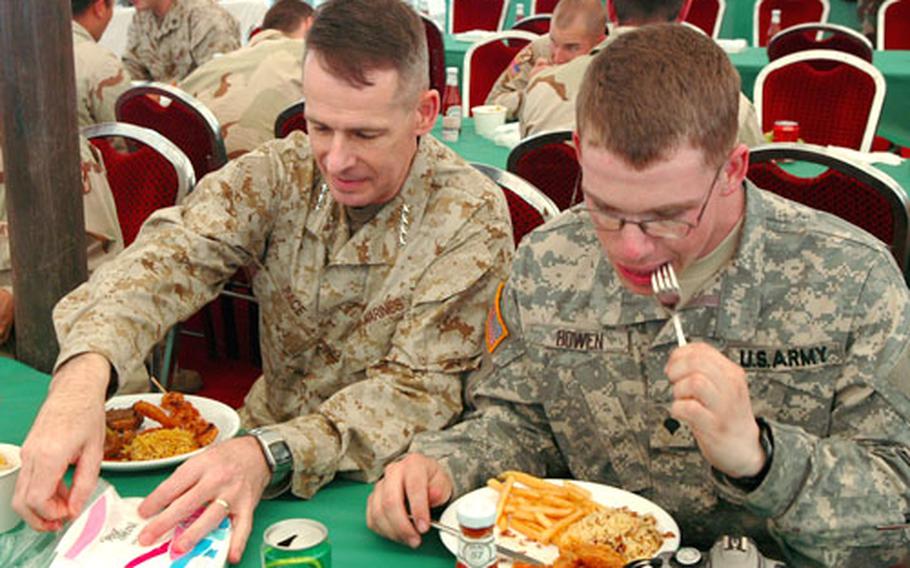 During a stop at Muzaffarabad, Pakistan, Chairman of the Joint Chiefs of Staff Gen. Peter Pace, left, had lunch with soldiers from the 10th Mountain Division of Fort Drum, N.Y. (Anita Powell / S&S)

MUZAFFARABAD, Pakistan &#8212; Joint Chiefs of Staff chairman Gen. Peter Pace made his first-ever visit to Pakistan this week to meet with top civilian and military leaders and to visit the site of October&#8217;s devastating earthquake.

Pace&#8217;s visit was a prelude to the withdrawal of all American military forces sent to Pakistan to participate in the earthquake relief effort. The final group of American airmen, Marines, sailors and soldiers are scheduled to complete operations at the end of this month.

Five months later, the earthquake&#8217;s mark &#8212; and the extensive relief effort &#8212; was still evident on the mountains around Muzaffarabad.

Blue-misted mountains glittered with metal-roofed homes built by survivors with donated supplies. Bright blue tents dotted valleys and mountainsides. Barren hillsides, covered with red earth the color of a raw wound, bore testament to the numerous landslides that happened during and after the earthquake.

Pace said the decision to launch what became the U.S. military&#8217;s largest-ever relief mission was spurred by both humanitarian and diplomatic reasons.

&#8220;I think it&#8217;s very important for us to recognize that there are things all men agree need to be handled and need to be handled in a compassionate way,&#8221; he said. &#8220;After 9/11, when my country was struck by terrorists, Pakistan came to our assistance and our aid. And your leaders made some very courageous decisions, some very difficult decisions.&#8221;

During his two-day visit, Pace also took an aerial tour of the affected area; met privately with Pakistani Prime Minister Shaukat Aziz and with Pakistani Army Maj. Gen. Farooq Ahmed Khan, head of the post-earthquake Federal Relief Commission, as well as a slew of other top military officials; met informally with Marines and 10th Mountain Division soldiers at Muzaffarabad; and held a lively question-and-answer session with upcoming Pakistani military officers at the National Defence College in Islamabad.

Crocker said that the American government would continue to work toward reconstruction of affected areas.

&#8220;We are not terminating by any means our involvement in this earthquake area,&#8221; Crocker said. &#8220;Now we are beginning reconstruction. We are committed to providing $200 million to this reconstruction effort over the next few years.&#8221;