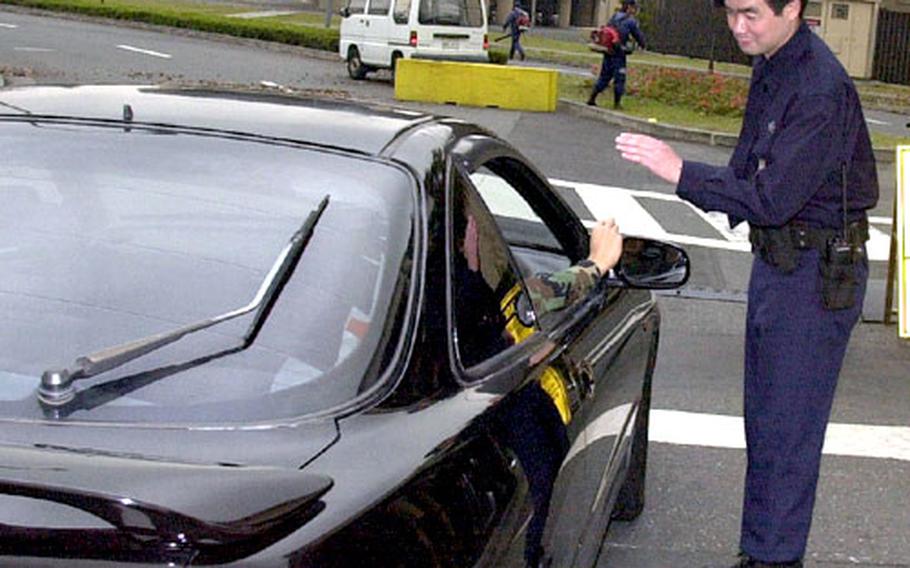 A civilian guard does a spot check for seat belt use at Yokota Air Base, Japan. (Jennifer Svan / S&S)

&#8220;Every year, Air Force members lose their lives in vehicle mishaps because they fail to use seat belts or proper&#8221; motorcycle personal protective equipment, Begert wrote in his Oct. 14 memo. &#8220;To help curb this unfavorable trend, I am implementing a zero-tolerance policy for not using safety equipment.&#8221;

There were two motorcycle fatalities in fiscal 2002, and during fiscal 2003 two PACAF airmen were killed in vehicle crashes and a third seriously injured, PACAF safety officials said.

Begert also directed bases to conduct monthly seat belt and &#8220;personal protective equipment&#8221; checks and to compile those statistics and brief him quarterly.

Second offense within a 12-month period: Privileges suspended one month.

Three times in 18 months: License revoked for a year.

In Japan and South Korea, where host-nation licensing authority is issued through local commands, violators lose off-base driving privileges as well, according to the policy.

The policy applies to all personnel sponsored under the U.S.-Japan Status of Forces Agreement.

Passengers who don&#8217;t buckle up can get the driver a ticket, too, says Master Sgt. David Schuller, 374th Airlift Wing ground safety supervisor. &#8220;As the operator, you&#8217;re responsible for making sure people in your vehicle are buckled up.&#8221;

Reaction to the strict enforcement of the policy is mixed at Yokota.

Some airmen say it&#8217;s the right thing to do, while others call it excessive.

Capt. David Macon, 35, said his concern about the policy is the bright, reflective vests required for motorcyclists.

Schuller said the reflective material stipulation was recently reimplemented at Yokota &#8212; it had been abandoned due to force protection concerns following the Sept. 11, 2001, terrorist attacks.

A three-quarters-length or full-face helmet is an additional Yokota requirement, Schuller said.

Anyone caught violating the policy will have his or her name added to a revocation/suspension list posted at all installation gates and law enforcement offices, Clifford said.

&#8220;If caught driving while your privileges have been suspended or revoked, an additional two-year revocation will be imposed,&#8221; Clifford said.

As of last Friday, no driving privileges have been revoked at Yokota under the zero-tolerance policy, Clifford said.

&#8220;This resulted in inconsistent policies and in some cases no policy, throughout the command,&#8221; Law said. &#8220;The new guidance standardizes the policy throughout PACAF.&#8221;

&#8220;Seat belts and motorcycle [personal protective equipment] do save lives and reduce severity when a mishap occurs,&#8221; Law said.

Feb. 9, 2002:An off-duty airman assigned to Kadena Air Base, Okinawa, was killed while driving a motorcycle after being struck by another motorcycle.

July, 21, 2002:An off-duty airman assigned to Hickam Air Force Base, Hawaii, was killed after losing control of his motorcycle and hitting a guardrail.

April 4:An off-duty airman assigned to Yokota Air Base, Japan, sustained head trauma resulting in a coma. The airman was a passenger in a car that struck a wall; he was not wearing a seat belt.

June 12:An off-duty airman assigned to Andersen Air Force Base, Guam, was killed in a single-vehicle crash. The airman was not wearing a seat belt.

July 23:An off-duty airman assigned to Misawa Air Base, Japan, was killed on a motorcyle after hitting a truck while traveling at a high rate of speed.