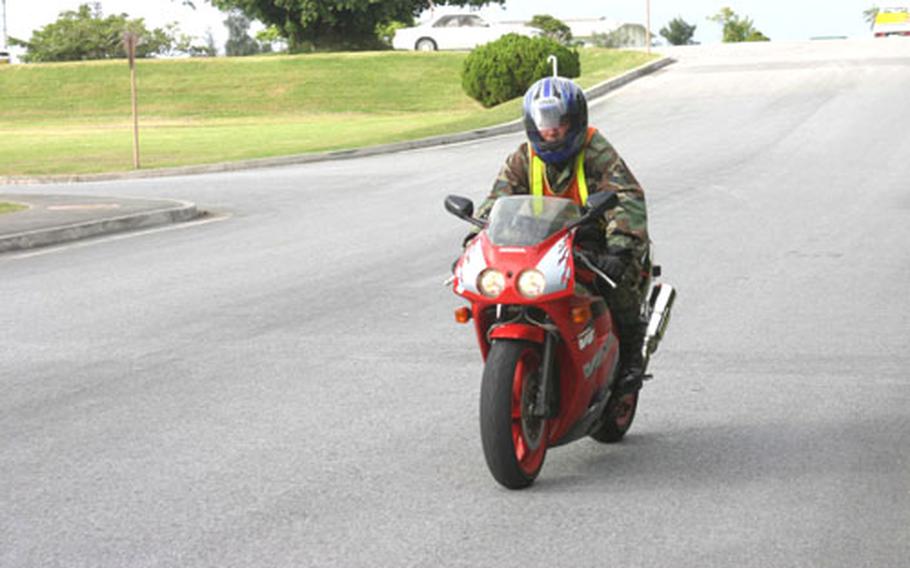 Motorcycle riding regulations at PACAF bases are some of the strictest in the Air Force following the release of a new supplement that toughens some rules set forth in the service&#8217;s traffic safety program.

The most noticeable change is the requirement that all motorcycle riders wear an international orange or lime-green safety vest with 90 square inches of reflective material.

The PACAF supplement was released May 17 and already is being enforced at most bases, officials said.

The Air Force requires that riders wear a brightly-colored and contrasting long-sleeve shirt or jacket. A spokesman from PACAF&#8217;s safety office said in a written statement that the vest was adopted to &#8220;clarify the wide array of possibilities left open&#8221; by the Air Force instruction.

Most PACAF bases have adopted former Commander Gen. William Begert&#8217;s zero-tolerance policy to enforce the vest rule: First-time violators lose motorcycle-driving privileges for 15 days; a second citation within 12 months results in a 30-day suspension; and a third ticket in a year equals no riding for 12 months.

Officials at Kadena Air Base, Okinawa, and Misawa Air Base in northern Japan said they, too, have implemented the new PACAF vest standard.

At Yokota Air Base near Tokyo, security forces began issuing warnings to bikers not in compliance, but the cops probably won&#8217;t start ticketing until Sept. 1, said Tech. Sgt. Garius Neal, acting ground safety manager for the 374th Airlift Wing. The delay gives motorcyclists a heads-up and time for the military clothing store on base to restock the vests.

The vests cost $10.25 and are available at base military clothing stores and some base exchanges.

Master Sgt. Adan Martinez, the 35th Fighter Wing&#8217;s ground safety manager at Misawa, said the vest is intended to make riders more visible to other motorists, but some riders feel that it cramps their style since it doesn&#8217;t allow them to show off their club colors. There are three motorcycle clubs at Misawa, though only one is affiliated with the base.

Eddie Fortunato, a servicemember assigned to Misawa and a member of the Koushins Cruiserz club, said: &#8220;I do not think the vest is a good idea.&#8221; Stressing that he&#8217;s speaking as a biker and not for the military, Fortunato said one of his biggest concerns is that the bright vest might make any military member off base a target to would-be terrorists.

Across the Air Force, 24 airmen lost their lives on motorcycles in fiscal year 2003. In PACAF, a Misawa biker was killed off base in July 2003, and an airman assigned to Yokota died after his bike collided with a truck in early June of this year.

Some other new PACAF regulations governing motorcycle use, according to military safety officials, include the following:

&#8226; All new motorcycle riders who have not completed a Motorcycle Safety Foundation course are restricted to bikes with engines of less than 600 cubic centimeters (4 stroke) and 200 cubic centimeters (2 stroke). The riders must take the MSF Experienced Rider Course after one year of riding experience before they can ride a bigger bike. All riders must show proof of purchase prior to June 2, 2004, to request an exemption to the rule.

&#8226; All motorcycle riders must take the MSF Experienced Rider Course every three years.