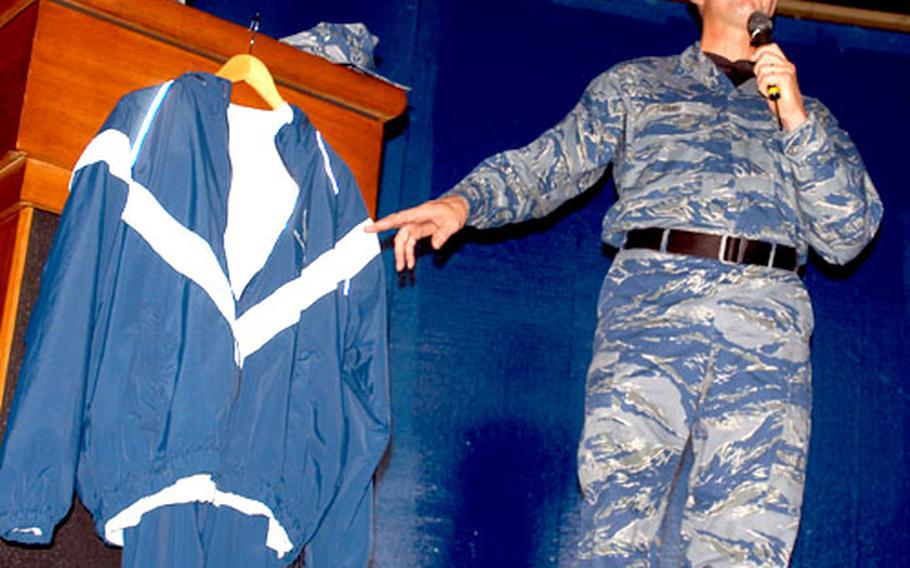 Popp was the one in the blue fatigues.

PACAF&#8217;s top enlisted man, Popp met with airmen at Kadena, Yokota and Misawa air bases, wrapping up his two-week visit at Misawa Friday with an enlisted call in Hangar 949.

The purpose of his trip was two-fold, he said: To lead the senior noncommissioned-officer induction ceremonies and seminars, and gauge the morale and readiness of the troops for new PACAF commander, Gen. Paul V. Hester.

But it was Popp&#8217;s blue-gray- and-green tiger-stripes and eight- point hat that garnered the most attention and discussion during his Misawa visit.

Questions from Misawa airmen about the proposed new uniform ranged from whether they&#8217;ll be able to alter sleeve length to how starch-free the attire will be.

The Air Force is touting the uniform as &#8220;wash and wear.&#8221; Unlike the current battle dress uniform, it doesn&#8217;t need starching, dry cleaning or ironing to look professional, officials say, which will save airmen time and money. Popp said his uniform required only 35 minutes in the dryer and no ironing.

But, addressing the airman&#8217;s question, Popp said he understood the concern, since the current BDU was also supposed to be wash and wear.

Popp has already suggested, he said, that more perma-press chemicals be added to the uniform&#8217;s material &#8220;so it truly does look like it has a crease.&#8221; Others have recommended sewing a crease into the sleeves and legs, he said.

&#8220;The key word is this is still a test uniform,&#8221; Popp said, advising airman to submit their suggestions or concerns at: http://www.af.mil/uniform. The Air Force is still seeking feedback about the proposed uniform.

More than 500 airmen are testing the uniform at nine different bases; PACAF&#8217;s test base is Elmendorf Air Force Base, Alaska.

Airmen in the fields of operations, maintenance, support and medical are documenting how many hours they wear the uniform, the detergents and wash cycles they use to launder it, and whether they note any problems, such as fading, Popp said.

Popp said the uniform is meant to make airmen distinctive from members of the other services at their home station; they&#8217;ll be issued other uniforms when they deploy depending on the combatant commander&#8217;s wishes.

Air Force officials say the proposed colors represent current and past uniform colors: The blue represents the service dress, the sage green represents the flight suit, the tan represents the desert uniform and the gray is from an old utility uniform. The tiger- stripes pattern was worn during the Vietnam War era.

Popp said the Air Force is expected to make a decision early next year. &#8220;Then, I would say, four years from now all of us will be wearing the new utility uniform,&#8221; he added.

The gear &#8212; the service&#8217;s first authorized PT uniform for squadron fitness programs &#8212; is supposed to be introduced early this fall, but Popp said there are &#8220;design problems,&#8221; explaining that the Air Force is looking for a contractor or vendor to make a quality uniform.

The work-out clothing would be issued to enlisted members, with officers required to buy the uniform.

Popp said servicemembers would be able to pack the uniform on deployments. &#8220;When we deploy, we&#8217;re not authorized to take a lot of civilian clothes with us, so now we have an optional set of clothes.&#8221;