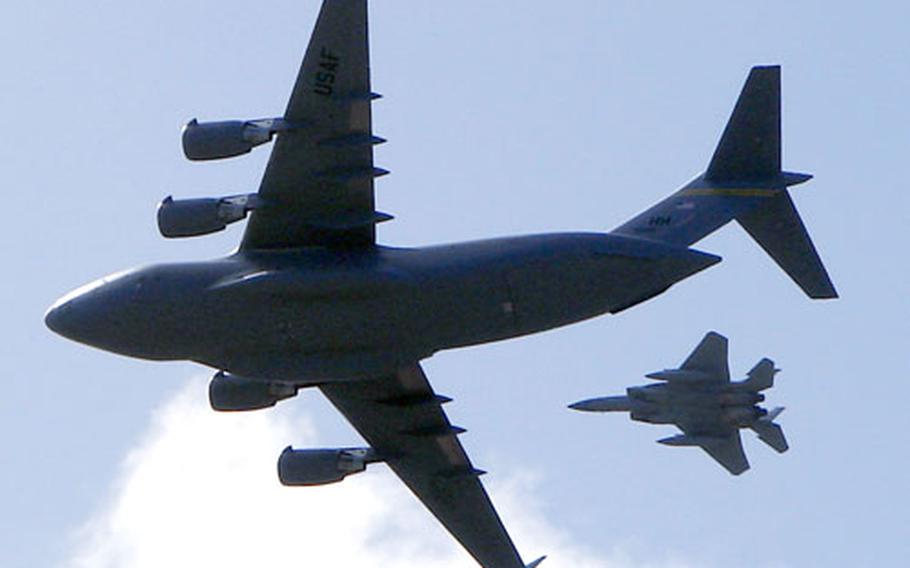 The Spirit of Hawai&#39;i-Ke Aloha and an F-15 from the Hawaii Air National Guard perform a fly-by on Wednesday. (Brad Jessmer / Courtesy of U.S. Air Force)

The Spirit of Hawai&#39;i-Ke Aloha and an F-15 from the Hawaii Air National Guard perform a fly-by on Wednesday. (Brad Jessmer / Courtesy of U.S. Air Force) 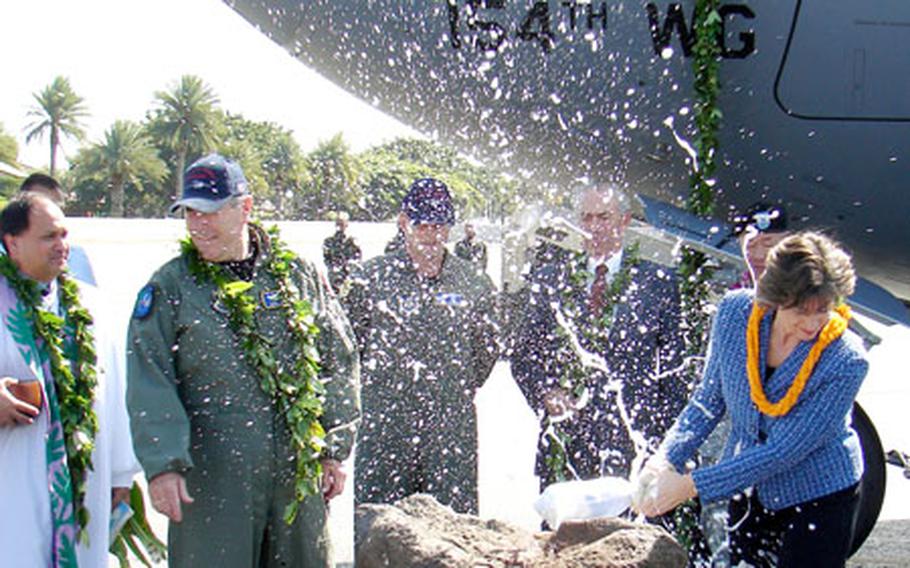 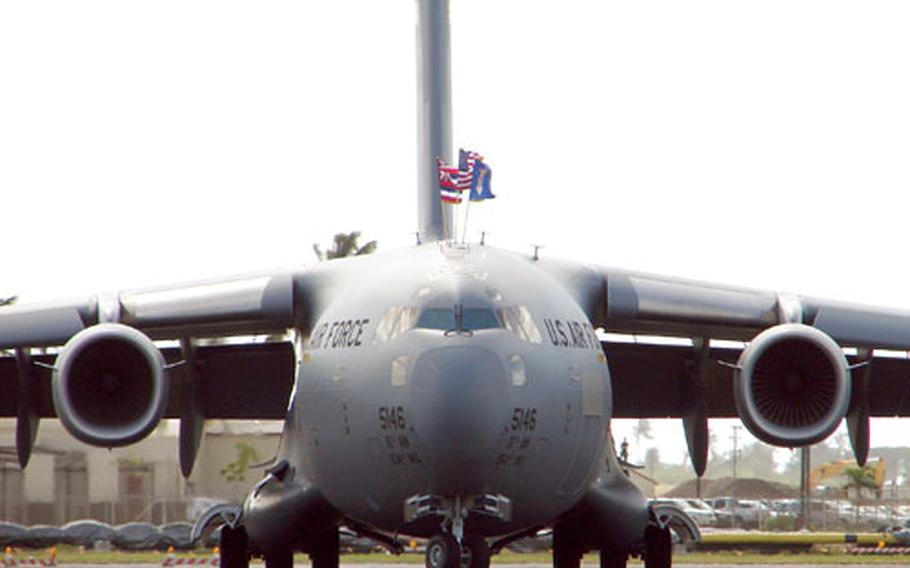 The Spirit of Hawai&#39;i-Ke Aloha, makes its final turn toward the reviewing stand after arriving Wednesday for its welcoming ceremony at Hickam Air Force Base, Hawaii. (Brad Jessmer / Courtesy of U.S. Air Force) 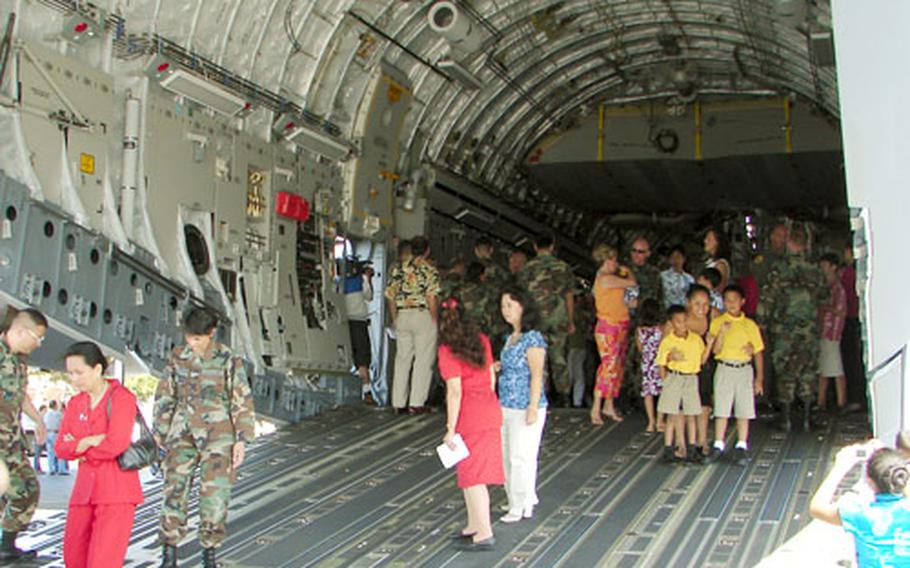 Attendees were able to get a closer look at PACAF&#39;s first C-17 after the welcoming ceremony at Hickam Air Force Base, Hawaii. (Brad Jessmer / Courtesy of U.S. Air Force)

It&#8217;s big, it&#8217;s multipurpose and, as of Wednesday, it&#8217;s permanently based outside the continental U.S. and under Pacific leadership for the first time.

The first of eight C-17 Globemasters, the Air Force&#8217;s newest cargo plane, arrived at Hickam Air Force Base, Hawaii, on Wednesday, launching a new era for airlift in the region.

&#8220;The C-17 gives our nation the flexibility and dexterity to excel across the entire spectrum of military operations &#8212; it can provide humanitarian aid one day and support full-scale combat the next,&#8221; said Gen. Paul Hester, Pacific Air Forces commander, in a Jan. 24 speech to civic leaders in Hawaii.

The arrival of the four-engine jets marks several firsts: the first time they are permanently based in the Pacific; the first time they&#8217;ll be operated and maintained jointly by active-duty and National Guard personnel; and the first time Pacific Command will have large cargo airlift capability at their own disposal.

&#8220;The Pacific Command and Pacific Air Forces area of responsibility is vast, but having these aircraft stationed here means they&#8217;re six hours closer than the mainland and that&#8217;s a six-hour-faster reaction time when airlift is needed throughout the Pacific,&#8221; Col. Bill Changose, commander of the 15th Airlift Wing that controls the new aircraft, wrote in an editorial in the Hickam base newspaper.

For an emergency response, Pacific Air Forces leaders can deploy the aircraft immediately without working through the transportation command that oversees the Air Force&#8217;s other C-17s on the continental United States.

Hickam welcomed the new aircraft, named &#8220;The Spirit of Hawai&#8217;i-Ke Aloha,&#8221; with a large celebration and traditional Hawaiian performances.

The Globemaster &#8212; its length and wingspan are almost equal the height of Niagara Falls &#8212; can land on short, rough runways, according to the Air Force. Its cargo compartment is more than 12 feet high and can hold three Bradley armored personnel carriers or a tank. It can carry the Army&#8217;s new Pacific-based Stryker Brigade &#8212; including the Stryker vehicles &#8212; or Pacific servicemembers to wherever they&#8217;re needed in a third less time than in the smaller, propeller-driven C-130 Hercules.

The Air Force plans to station additional C-17s at Elmendorf Air Force Base, Alaska, also part of PACAF, next year.

Under a new Air Force program, the Hickam-based C-17s will be crewed and maintained by a partnership between active-duty forces and Hawaii National Guardsmen from the 154th Wing.

The first strategic heavy airlift C-17 Globemaster to be based at Hickam Air Force Base, Hawaii, arrived Wednesday. It is the first C-17 to be based outside the continental U.S., the first to fall under control of Pacific Command and the first to be operated jointly by active-duty and National Guard airmen.

Crew:Three (two pilots and one loadmaster)