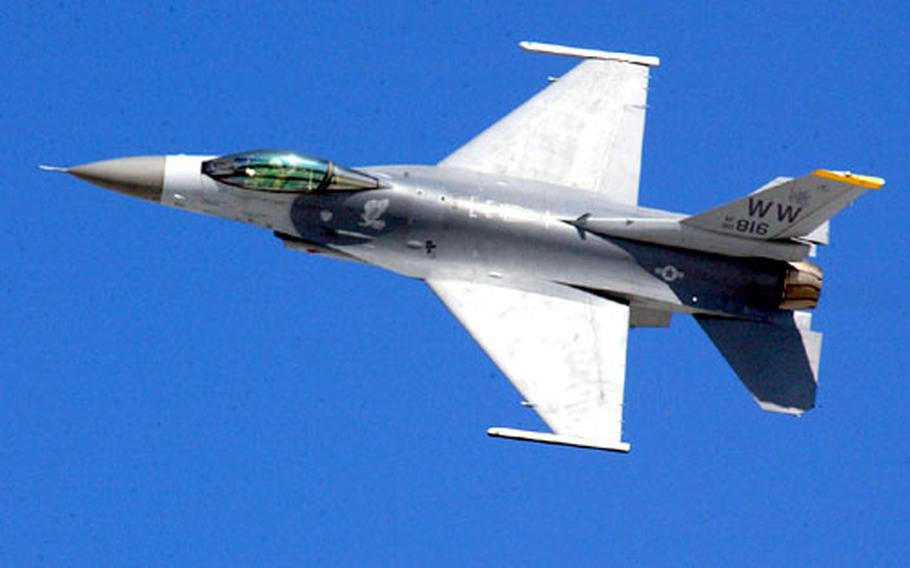 The Pacific Air Forces F-16 demonstration team is in Singapore this week to showcase its capabilities for tens of thousands of visitors at the Feb. 24-29 Asian Aerospace Airshow.

The pilot, Capt. Keith Rockow, and a 13-person support staff make up the team. They travel throughout the Pacific during the year, hitting about 10 Japanese and five international airshows.

While their primary focus is to showcase the jet&#8217;s capabilities, they say public relations plays a big role.

Rockow, with about 1,200 flight hours in the F-16, recently replaced the former demo team pilot who became ill; Singapore is his first airshow. During the show, he said, he&#8217;ll perform about 12 maneuvers in a 13- to 14- minute demonstration.

Staff Sgt. Nathan Amirault has been on the team for 18 months, working as an electrical and environmental systems specialist. He also narrates the demonstration.

Working on the team is a collateral duty, meaning the members still have normal day-to-day jobs. Preparing for a trip can mean lots of extra off-duty hours spent packing tools and spare parts.

Joining the team &#8220;seemed like a lot of fun to reach out and get close to the local community,&#8221; Amirault said.

He has traveled to Singapore, South Korea, Australia and around Japan, representing the Air Force. One of his favorite trips was to Kanoya Naval Base, near Fukuoka, Japan.

Both Amirault and Rockow said a lot of work goes into a successful airshow. The Singapore trip required tanker and airlift support, so it&#8217;s been &#8220;in the works for quite a while,&#8221; Rockow said.

The whole team is required to support publicity events and make guest appearances at local schools and orphanages.

Amirault said &#8220;talking to people from aviation magazines, Japanese newspapers, meeting and greeting&#8221; was difficult at first because he was nervous. But not anymore.

Rockow said he couldn&#8217;t wait to start meeting people at the air shows, especially in Japan.

He said that&#8217;s especially important around Misawa Air Base.