PACAF commander touring bases for foundation in task of transformation 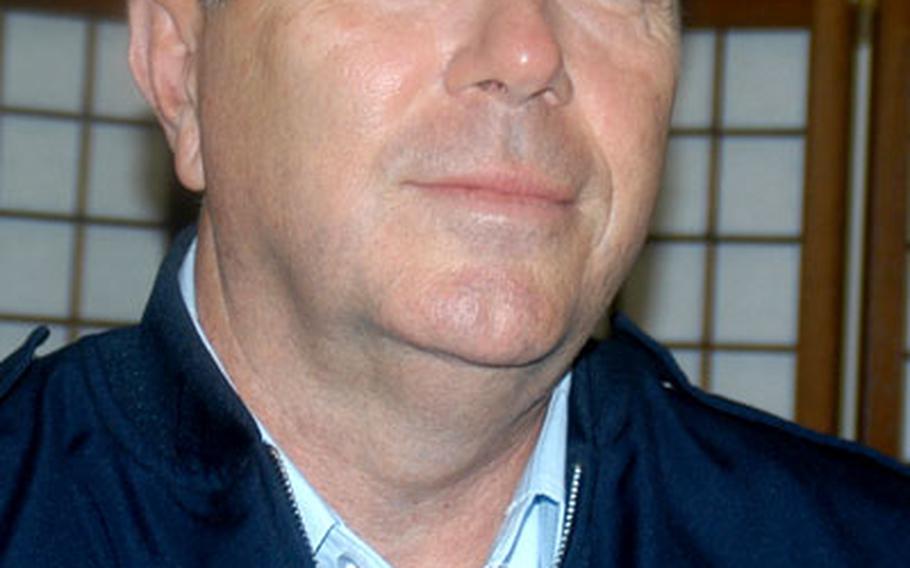 MISAWA AIR BASE, Japan &#8212; Only four months into his new job, Gen. Paul V. Hester is staring down an enormous task: Reshaping how Pacific Air Forces does business to meet the mighty goals of military transformation.

The four-star PACAF commander was at this northern Japan base Monday and Tuesday, wrapping up a 10-day tour of Japan to meet with base leaders and airmen at Yokota and Kadena air bases, as well as Misawa.

Those visits, in addition to stops planned later this year in South Korea and Alaska, &#8220;will help shape the kind of foundation of where we are,&#8221; he said. &#8220;Then we will decide, in concert with Adm. [Thomas] Fargo and the secretary of Defense&#8217;s direction ... how we can reshape our basing strategy in the Pacific and what that might mean to the Air Force.&#8221;

Defense Secretary Donald Rumsfeld has called on military leaders to transform the military into a more agile force.

In a wide-ranging interview Tuesday with Stars and Stripes, Hester discussed what near-term changes military transformation might bring to the Pacific and answered questions on a variety of topics, from costs to fight the war on terror to joint use of Yokota Air Base&#8217;s runway.

Hester said his priorities as PACAF commander include ensuring that &#8220;Air Force families continue to take care of and lead other Air Force families. We need &#8230; to make sure we have some quality of life that takes care of our Americans as they are away from America&#8217;s shores.&#8221;

But perhaps more pressing, he said, are the issues of military transformation and modernization.

The general said he still is considering whether to mesh 5th Air Force, headquartered at Yokota, and Guam&#8217;s 13th Air Force. He said he intends to activate a permanent Air Operations Center in the Pacific but needs more staffing to do so. &#8220;We&#8217;re looking at some of our numbered air forces as a place to find some of that manpower,&#8221; he said, noting that it&#8217;s &#8220;undecided as to where any merger would be permanently stationed.&#8221;

Hester said he expects PACAF and the Pacific arena will modernize through advanced technology and weapons systems. During the next three years, he said he anticipates PACAF investing and committing to &#8220;ISR platforms&#8221; &#8212; intelligence, surveillance and reconnaissance. It&#8217;s possible the Global Hawk and Predator, which can perform unmanned aerial reconnaissance and surveillance missions, could find a permanent home in the Pacific, Hester said.

With these systems, &#8220;we can pick up pieces of focused intelligence and reconnaissance that might be useful to us as preventative measures in conflicts between nations and intentions between nations,&#8221; Hester said, &#8220;as well as assisting if a conflict were to break out. They&#8217;re always useful to us in being able to have our eyes in the sky.&#8221;

&#182; The Air Force&#8217;s new fitness standards: The general said the Air Force worked hard to prepare airmen for the first round of new fitness testing this year. &#8220;Our next challenge is not just to get them to pass it one time but to maintain a fitness level 365 days of the year,&#8221; he said. The program is going well, so far, he added. &#8220;I think we&#8217;re absolutely excited by what we see in the number of airmen that are out pounding the pavement and over in the gym lifting weights, doing push-ups, doing pull-ups, getting fit for the challenges that confront them &#8230; when we ask them to go into the combat zone.&#8221;

&#182; Whether commercial use of Yokota Air Base&#8217;s runway could work as it does at Misawa Air Base: &#8220;Yokota and Misawa are two very, very different communities and they are obviously in very, very different parts of Japan and that leads to some great differences in whether one construct, the Misawa picture, could be overlaid on the Yokota picture,&#8221; he said, deferring to Lt. Gen. Thomas Waskow, commander of 5th Air Force and U.S. Forces Japan, who is based at Yokota.

Hester also said Tuesday he did not know when PACAF bases would begin administering the flu vaccine to those with priority or deemed high-risk.

Hester entered the Air Force in January 1971 after receiving his commission through University of Mississippi&#8217;s ROTC program. A command fighter pilot, with a combat tour in Southeast Asia, Hester served as commander of U.S. Forces Japan and 5th Air Force from September 1999 to November 2001. Prior to being tapped to lead PACAF, Hester was commander of Air Force Special Operations Command at Hurlburt Field, Fla.