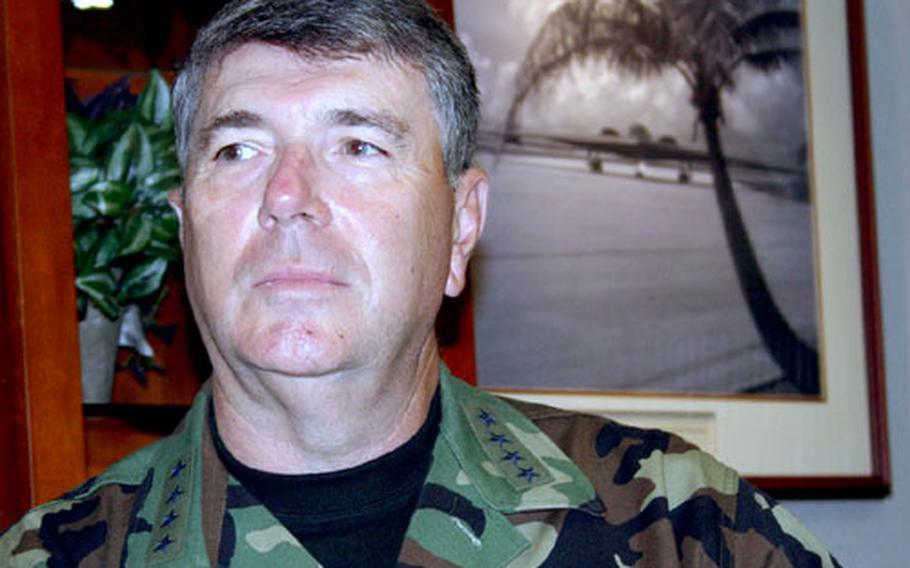 ANDERSEN AIR FORCE BASE, Guam &#8212; The commander of Pacific Air Forces gave a glimpse into Guam&#8217;s future at the end of a 24-hour visit here Wednesday.

The Air Force&#8217;s current practice of deploying bombers to Guam for about four months at a time will continue into the foreseeable future, with the planes permanently stationed at stateside bases, Gen. Paul Hester said.

Fighter deployments have been less regular in the past but &#8220;we expect to see more of the fighter deployments over the next several years come in on an established basis, maybe once or twice a year,&#8221; he said in a meeting with media.

&#8220;We expect that the tankers will stay rotational until our desire later in the decade for them to become permanent,&#8221; he added. &#8220;We are trying to find an opportunity to get about 12 tankers to move permanently into Guam.&#8221;

The Air Force has proposed establishing a Global Strike Task Force, Hester said. It would start in 2006 and would include &#8220;about six&#8221; Global Hawk unmanned aerial vehicles to be based permanently at Andersen, he said.

&#8220;Then we&#8217;re talking with other nations to see if they buy Global Hawk, whether they would station those permanently in their country or would they join here in Guam,&#8221; he said. &#8220;We would use this as kind of an ISR (Intelligence, Surveillance and Reconnaissance) Global Hawk Center of Excellence.&#8221;

Looking farther into the future, Hester said details of relocating up to 7,000 Marines from Okinawa, which was announced recently, have yet to be completed but such a move undoubtedly would affect Guam&#8217;s bases.

&#8220;That quantity of people requires us obviously to have the ability to feed them, house them, have a place for them to train &#8212; and those things have not yet been done,&#8221; he said. While Andersen regularly hosts expeditionary forces on a temporary basis, it currently lacks the capacity to accommodate such a large group.

Hester was addressing the possible use of Andersen by a Navy carrier air wing should an aircraft carrier be stationed on Guam. The Honolulu International Airport and Kaneohe Bay on Hawaii, reportedly Guam&#8217;s main competitor to house a carrier, already have full contingents of planes. A carrier air wing, therefore, likely would have to be divided and stationed in different locations in Hawaii.

While on Guam, Hester also met with Andersen officials and attended a small reception with members of the Guam Chamber of Commerce Armed Forces Committee. He was to head next to Thailand, Malaysia and Okinawa.