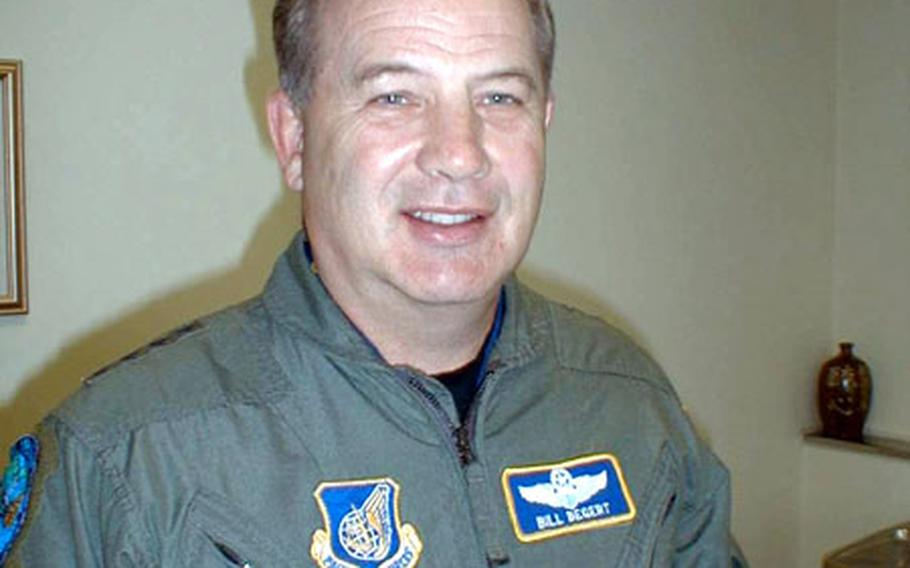 MISAWA AIR BASE, Japan &#8212; Labeling North Korea as &#8220;a serious situation,&#8221; the top Air Force commander in the Pacific said Thursday that B-52 bombers and F-117 Stealth fighters will remain deployed to Pacific bases for now.

&#8220;We&#8217;re still very concerned about North Korea, that is a serious situation. It&#8217;s been here for more than 50 years. North Korea&#8217;s misbehavior is nothing new,&#8221; Gen. William Begert, Pacific Air Forces commander, said in an interview with Stars and Stripes at the conclusion of his two-day visit here.

While America and the world&#8217;s attention was riveted on the Iraqi war, North Korea escalated its hard-line rhetoric against the United States earlier this year.

On the heels of announcing it would restart its long-dormant nuclear reactors, the reclusive state accused the United States of &#8220;warmongering,&#8221; then announced it was withdrawing from a nuclear nonproliferation agreement.

That prompted the United States to dispatch the aircraft carrier USS Carl Vinson to the region, B-52 bombers to Guam and F-117 Stealth fighters to South Korea.

Begert could not say when those aircraft would return to their U.S. bases, adding that their presence sends a message.

&#8220;The deterrent force we represent not only at Misawa, and around the Pacific, but we have the ability to call on the whole Air Force to be brought forward, if we need it,&#8221; he said.

As Operation Iraqi Freedom winds down and troops return to home duty stations, Begert said PACAF&#8217;s people may see something of a lessening of a high-operations tempo.

&#8220;Fortunately, operations Northern and Southern watches have been shut down, so we may be entering a period where we have a pause in the ops tempo &#8212; to allow us to reconstitute a lot faster than if we still had the watches,&#8221; he said. &#8220;We still have Operation Enduring Freedom going on.&#8221;

Last week, an Air Force official said the operational demands of Operation Iraqi Freedom and other requirements forced the service to break out of the 90-day rotation cycle for the aerospace expeditionary forces concept that sent Air Force aircraft and troops to worldwide contingencies.

Maj. Gen. Timothy Peppe, special assistant for AEF matters, told the Armed Forces Press Service this month plans call for the AEF deployment schedule to be back on track by early in 2004.

To achieve that goal, the Air Force will piece together two transitional AEFs to meet deployment combatant commanders&#8217; needs into 2004. Manning for these two AEFs will come from the ranks of those who have not deployed this cycle.

He said making sure troops deployed the longest get home to relax with families before returning them to a training cycle is important.

Given a relatively &#8220;modest&#8221; Air Force involvement with operations in the Philippines, Begert said the United States is committed to help the Philippine armed forces deal with insurgencies within that country&#8217;s borders.

Fighter aircraft from Misawa and Okinawa&#8217;s Kadena Air Base heavily supported wartime operations in Southwest Asia and flew hundreds of sorties on a demanding schedule.

&#8220;It&#8217;s remarkably good, and I&#8217;ve been very pleased with what the maintainers have been able to do with a force structure I sometimes describe as geriatric,&#8221; he said. &#8220;The quality of our maintenance people have made it possible to maintain our mission-capable rates.&#8221;

Last year, PACAF announced C-17 cargo aircraft &#8212; the newest airlifter in the Air Force inventory &#8212; would be assigned to PACAF bases in Alaska and Hawaii.

Under the Air Force&#8217;s Mobility roadmap plan, eight C-17s would be assigned to Hawaii and another eight to Alaska&#8217;s Elmendorf Air Force Base.

As the Air Force modernizes its airlift resources, Begert said a &#8220;waterfall&#8221; effect as older aircraft models are retired could hasten the appearance of newer C-130H Hercules cargo aircraft at Yokota Air Base near Tokyo.