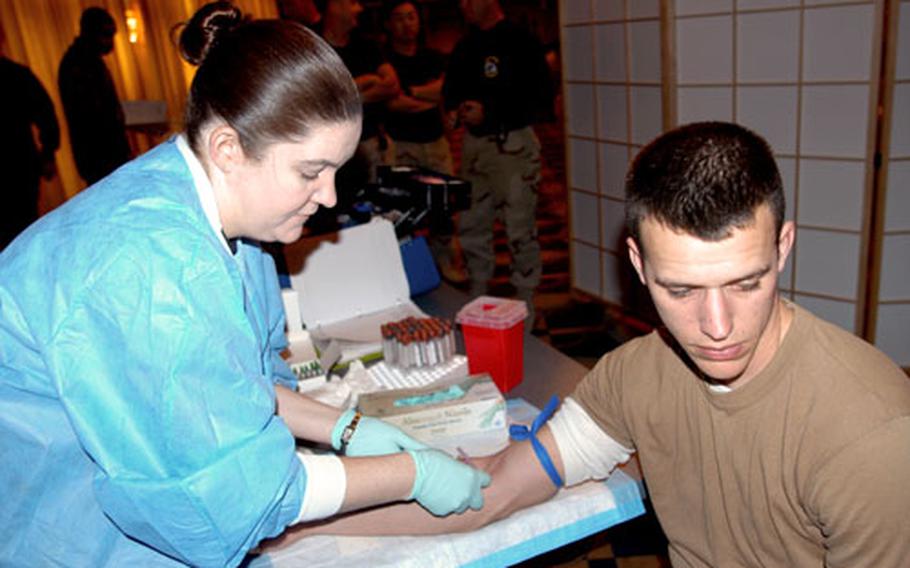 MISAWA AIR BASE, Japan &#8212; Senior Airman Luis Burgos counts himself lucky. During four months at Ali Base near Nasiriy7ah in south-central Iraq, he never experienced a close call, roadside bomb or combat.

But the enemy always seemed to lurk. Several times, personnel were ordered to take cover and don full protective gear when a rocket or mortar attack was feared imminent. The assaults never came but the anticipation created a stressful environment, said Burgos, 31, a 35th Operations Support Squadron airman.

Burgos was among about 70 personnel fresh off a deployment attending a mandatory reintegration briefing Thursday at Misawa. The session is to help returning airmen phase back into home, community and work.

The need for the extra support stems from the heightened operational tempo, increasingly requiring active-duty and Reserve servicemembers to deploy to the front lines, whether to drive convoys or work on bases deep in war zones.

&#8220;More of our personnel are being exposed to traumatic events,&#8221; Baumgarten said, &#8220;and we know that traumatic events can have residual effects when they return&#8221; to the home base.

The PACAF plan is patterned after the Army&#8217;s program in Europe, Baumgarten said. It starts even before airmen go home. Thirty days or less before leaving their deployed location, they must attend a briefing, usually by a chaplain, about what to expect.

The same messages are repeated at the home base reintegration briefings, to which spouses also are invited. &#8220;The biggest piece of it is recognizing the symptoms of stress and when to get help,&#8221; Baumgarten said.

He asks airmen during the briefing: &#8220;Where did you deploy? Did you engage the enemy? Did you see a casualty of some sort? Were you busy? Did you feel part of the mission?&#8221;

Among Thursday&#8217;s group, no one in the room saw combat and everyone had returned from Kuwait. Except Burgos. Deploying to a hostile location such as Iraq and Afghanistan means he must fill out a two-page mental health questionnaire 30 to 60 days from now &#8212; another piece of the PACAF reintegration plan.

&#8220;It gives us a chance to screen for problems and make a referral as necessary,&#8221; Baumgarten said.

Residual effects of stress experienced downrange may not show up until after an airman has been away from the area for a few weeks, he said, noting that another mental health screening may be implemented at the 90- to 120-day post-deployment mark.

Even though most airmen at the briefing didn&#8217;t have deployments likely to produce flashbacks or nightmares, he said, adjusting to &#8220;normal&#8221; can be stressful &#8212; as found a 35th Logistics Readiness Squadron airman who drove convoys in a hostile area.