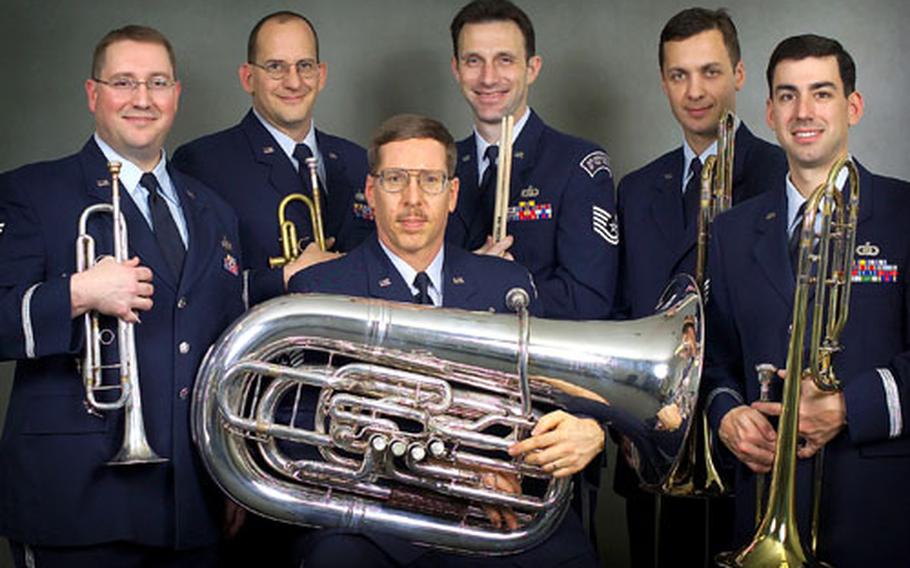 “Pacific Brass,” a six-man ensemble within the U.S. Air Force Band of the Pacific-Asia, makes a first-ever trip to Bangladesh next week for a series of concerts. (U.S. Air Force)

YOKOTA AIR BASE, Japan &#8212; Two prominent groups within the U.S. Air Force Band of the Pacific-Asia are hitting the road this week for a series of concerts.

&#8220;Pacific Brass,&#8221; a six-man ensemble featuring two trumpets, a tuba, drummer and pair of trombones, makes a first-ever trip to Bangladesh, while the rock band &#8220;Final Approach&#8221; heads to Singapore on a tour that coincides with the massive Asian Aerospace Conference held every other year in the Pacific.

Maj. Daniel Price, the band&#8217;s commander, said such excursions are diplomatically beneficial and help build a positive U.S. image in the region.

The near-simultaneous visits &#8212; Singapore from Feb. 18 to Feb. 27 and Bangladesh Feb. 20 to March 2 &#8212; are being carried out in radically different settings. While Singapore is a key U.S. ally, economically sound and internationally diverse, Bangladesh is a third-world country that&#8217;s predominantly Muslim with little Western influence.

Security is an issue in the latter, Price conceded, so Pacific Brass won&#8217;t play widespread &#8220;open-air gigs&#8221; and instead will focus on schools and other controlled environments.

Tech. Sgt. Keith Fitzgerald, the noncommissioned officer in charge of Pacific Brass who plays trombone, and Tech. Sgt. Lawrence Wiley, a trumpet player, were sent on an advance trip last month to weigh the risks and make arrangements.

Wiley said the U.S. Embassy and Defense Attache office would do threat assessments in each area and determine appropriate security levels.

A highlight for Pacific Brass, which delivers a mix of rock, jazz, classical and easy-listening selections, will be a joint performance with the Bangladesh air force band before 4,000 people in a cricket stadium.

Final Approach, which has nine performers, a horn section and sound engineer, will appear at an aircrew reception and stage a handful of public shows in Singapore. The band specializes in traditional rock, country, jazz, pop and contemporary styles and has drawn local comparisons to the band Chicago.

The group also will play at the Asian Aerospace Conference, where more than 200 military delegations are expected to gather.

The PACAF band, which has a total of 31 members, made trips to Australia, Thailand and the Philippines in 2005.

Later this year, certain elements will perform in Tohoku, Shubu and Misawa Air Base in Japan. They&#8217;re scheduled to play the opening ceremonies of the Japanese Special Olympics at Kadena Air Base, Okinawa, in June. In October, 20 performers will conduct jazz concerts during a nine-day tour of South Korea.

Price said the band is considering Mongolia as a possible stop in 2007.