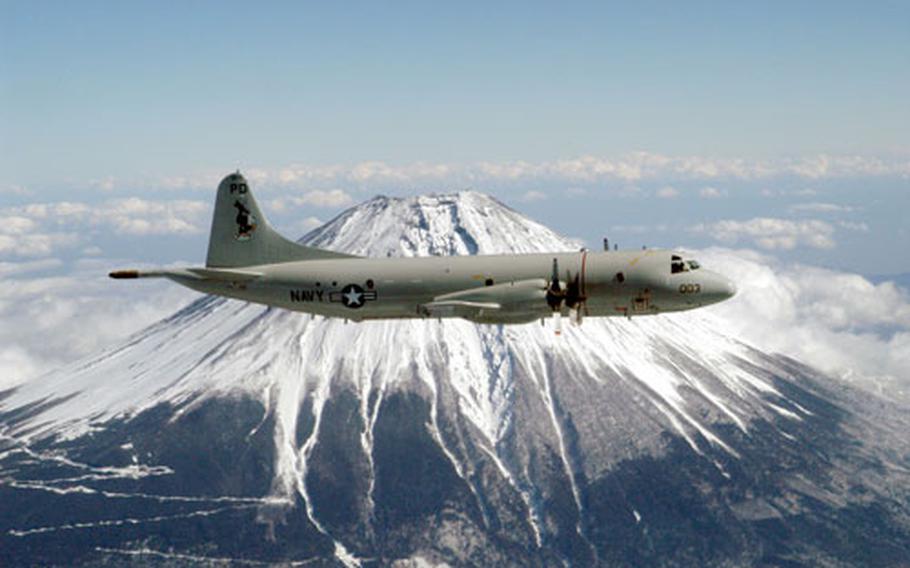 It is estimated it will take about three years to get all of the grounded aircraft flying again, said spokesman John Milliman.

&#8220;A comprehensive plan is being developed which will include acquiring necessary replacement materials and optimizing use of depot capacity to return aircraft to service,&#8221; Milliman said in a Monday e-mail to Stars and Stripes. &#8220;The process will take 18 to 24 months per aircraft.&#8221;

Officials are still working out where the repairs will be done and how to compensate for the grounded aircraft, Milliman said.

The Navy would not say specifically where the 10 deployed aircraft are right now due to operational security concerns, said Navy spokesman Cmdr. Jeff Davis. The other grounded aircraft are in the United States, including Hawaii.

P-3C Orion, not to be confused with the spy plane that was forced down in China, is based out of the United States and makes rotational deployments to Japan, the Persian Gulf and other forward locations, Davis said.

An ongoing analysis of the P-3 aircraft found structural issues with the aft lower wings of the planes that were grounded, Milliman said.

&#8220;The analysis has shown that the aft lower sections of the wing are at risk beyond known structural limits on the P-3 aircraft identified in the grounding bulletin,&#8221; he said.

Davis called the decision to ground the affected P-3C aircraft a proactive measure.

&#8220;We are acting early, based upon engineering analysis and fleet inspections to ground these aircraft before a problem arises,&#8221; he said Monday. &#8220;We place top priority on the safety of our aircrews. For perspective, groundings are not common, but at the same time we don&#8217;t hesitate to take an action like this in the interest of aircrew safety.&#8221;

P-3C aircraft were grounded three times in 2005 and 2006, but those aircraft have since returned to service, Davis said.

He also said the Navy is confident the P-3C aircraft not affected by the grounding are safe to fly.

The Navy has 161 P-3C Orion aircraft, which were originally designed for anti-submarine warfare but now also perform search and rescue functions, surveillance to troops in Iraq and Afghanistan and assist anti-piracy operations off the Horn of Africa, according to the Navy.

The average age of P-3C aircraft is 28 years, Davis said. The oldest aircraft is 44 years old, and the youngest is 16 years old.