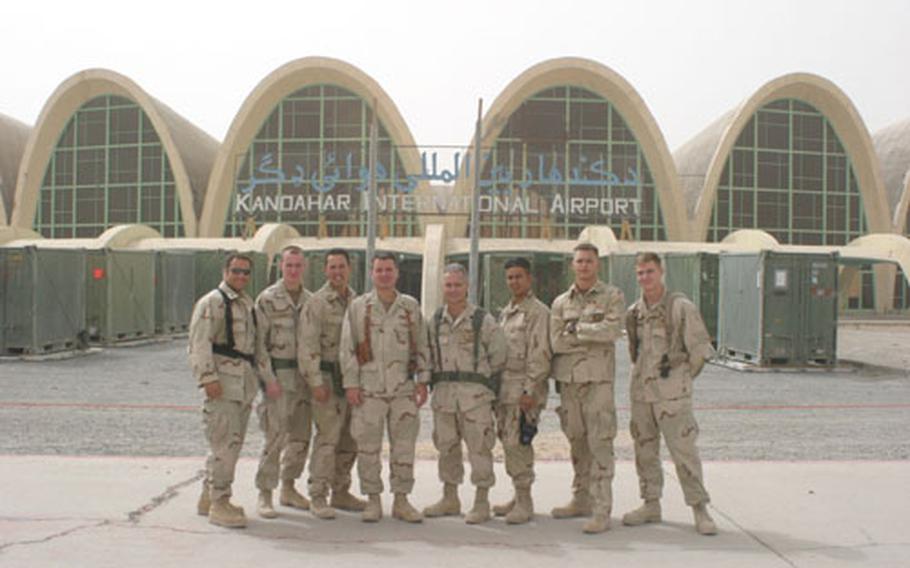 MISAWA NAVAL AIR FACILITY, Japan &#8212; Ten sailors from this northern Japan base returned in late August from a four-month deployment in landlocked Afghanistan, where they slept in tents and battled sandstorms and dry heat with soldiers, Marines, airmen and coalition forces.

Since the Sept. 11, 2001, terror attacks, members of Misawa&#8217;s Fleet Maritime Patrol Mobile Operational Control Center-Western Pacific and the P-3 Orion planes they support, have been moving farther from water as their mission grows.

&#8220;Maritime patrol aircraft have expanded their role to support the global war on terrorism,&#8221; he said.

At home, sailors with Misawa&#8217;s operational control center support P-3 squadrons from the United States who deploy to Misawa on six-month rotations. They also support P-3s in distant locations, including Kuwait and the Philippines.

In Afghanistan, the Misawa sailors set up a remote tactical support center for the P-3 Orions at a joint Air Force-Army base in Kandahar.

The sailors&#8217; job was to provide the P-3 aircrews with communications, command, control, computer and intelligence support, Harrington said.

The sailors could not disclose how many P-3 Orions they supported, nor where those planes were assigned, due to the nature of the ongoing mission.

The Honolulu Star-Bulletin sheds some light on the P-3 Orion mission in Afghanistan, reporting that since Sept. 11, the aircraft have been used to gather intelligence and provide surveillance and reconnaissance for commanders in the Arabian Sea and on the ground in Afghanistan. The equipment on board the four-engine, turboprop planes, the newspaper says, can help troops on the ground gain situational awareness by transmitting digital images and verbal or e-mail messages to commanders by satellite.

The Misawa sailors, with their expertise and 18,000 pounds of electronic and communications equipment, ensured the P-3 crews were able to perform their jobs adequately and safely. They conducted flight-safety briefings and debriefings, among other tasks, and made sure the crews checked in hourly, said Petty Officer 1st Class Kyle Wilkinson, aviation warfare systems operator.

&#8220;We keep track of them hourly or sometimes less, depending on how hostile the environment is,&#8221; he said.

Most challenging during the mission was maintaining the equipment in the hot and dusty environment, the sailors said.

They built makeshift shade for outdoor gear and constantly cleaned it.

Though the deployment was mostly work, there was some excitement away from the job. Wilkinson found a viper coiled in his tent, Harrington got his photo snapped with Fox News personality Geraldo Rivera and Cox remembers nearly dropping his boxed dinner when 120 mm rocket flares were set off to illuminate an area outside the base perimeter.

There also were serious, somber moments: On Memorial Day, the sailors and other servicemembers at Kandahar remembered five soldiers attached to a unit there who were killed the day prior.

&#8220;Those types of things really drove home why we were there,&#8221; to fight the war on terrorism, Harrington said.