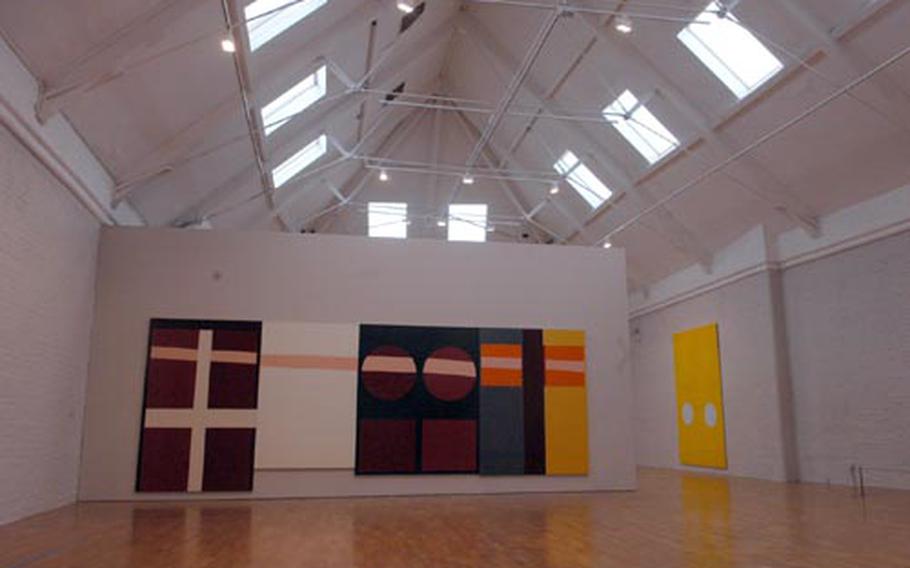 The spacious and airy Modern Art Oxford Museum used to be a brewery. Exhibits change every few months, offering something new with every visit. (Geoff Ziezulewicz / S&S)

OXFORD &mdash; Oh, ye gods! Can it really be true? The dollar has gained ground against the mighty British sterling in recent weeks, meaning it now takes less than two of your greenbacks to make one pound.

You&rsquo;ll have to forgive us here at Stripes for dwelling on this awful exchange rate week after week. But we don&rsquo;t need to tell you how this affects your ability to go out and experience Britain. That&rsquo;s a story in and of itself.

However, there is some free culture on tap in Oxford. The Modern Art Oxford Museum in the city center is free and host to a constantly revolving slew of modern art exhibits.

Younger guys, this is a great cost-effective spot to take that first date. Family folk, the bright colors and open spaces will amuse and maybe even educate your brood.

The museum is actually an old beer factory known as Halls Brewery, and it was founded in the mid-1960s.

Originally focusing on permanent galleries and temporary exhibitions, the museum has since become exclusive host to traveling art exhibits.

Through August, visitors can check out a series of door paintings by British artist Gary Hume. The doors are varied and painted in high-gloss color, based largely on the institutional swing doors of St. Bartholomew&rsquo;s hospital in London&rsquo;s East End.

For those with a depth of art knowledge, the works were praised for their play on the language of modernist abstraction and the democracy of the motif, according to a museum fact sheet.

Whatever that means, they&rsquo;re interesting to look at and the space is the epitome of serene, a nice contrast to the bustle outside.

My uncle used to say, "when it&rsquo;s free you really got nothing to lose." He choked to death at a complimentary clam bake back in aught-two, but still, that rationale may be reason enough to check out the Modern Art Oxford Museum. It won&rsquo;t cost you a dime, and you might learn something.

What: A free modern art museum in the heart of downtown Oxford with a revolving door of modern art exhibitions.

Cost: This one&rsquo;s on the house.