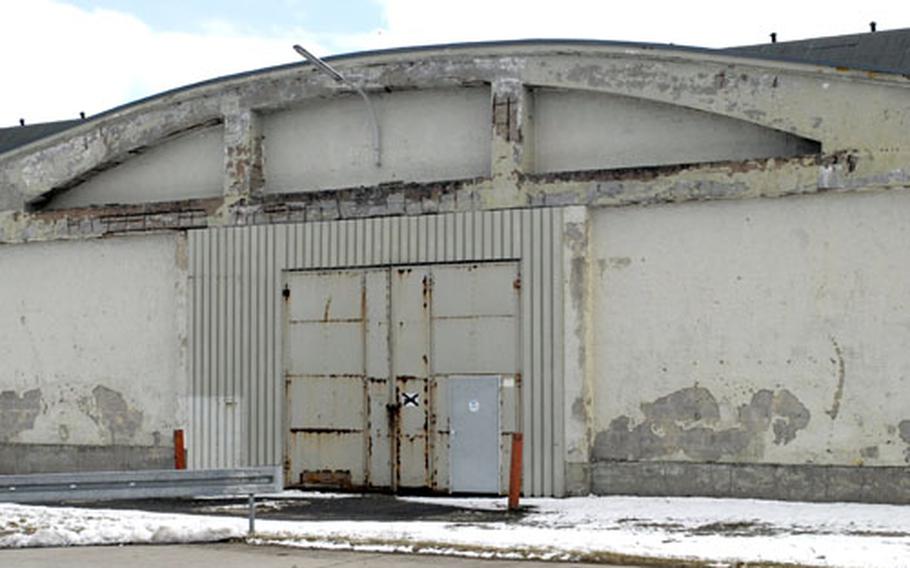 Building 6217 at McCully Barracks in Wackernheim, Germany, is slated for renovation, but barn owls have decided to call the building their home. Engineers are planning to construct a barn owl box near the building hoping the owls will move to the box so renovations can begin. (Mark Patton / S&S)

Building 6217 at McCully Barracks in Wackernheim, Germany, is slated for renovation, but barn owls have decided to call the building their home. Engineers are planning to construct a barn owl box near the building hoping the owls will move to the box so renovations can begin. (Mark Patton / S&S) 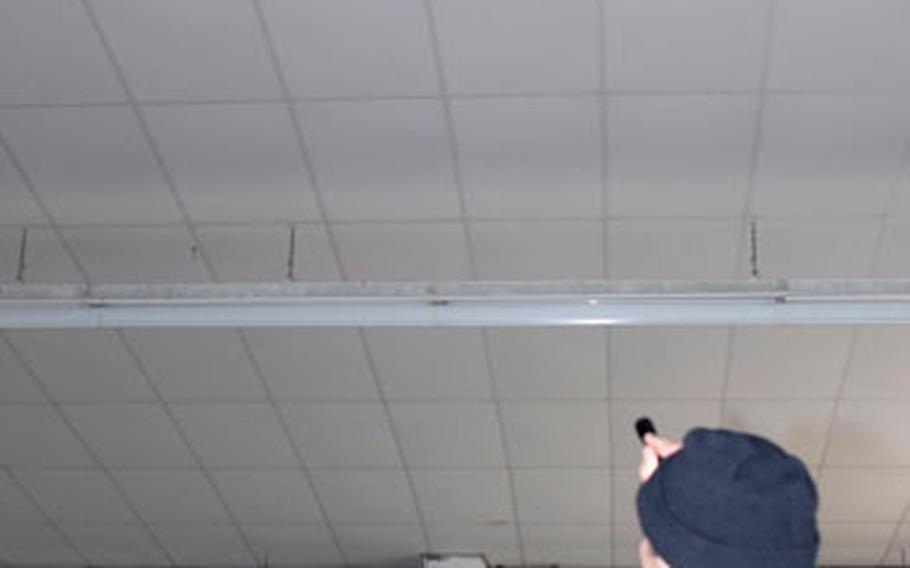 Gordon Adam, an environmental technician with U.S. Army Garrison Wiesbaden’s Directorate of Public Works, points to a spot in the ceiling inside Building 6217 at McCully Barracks in Wackernheim, Germany. Adam said the hole, along with the droppings beneath it, are evidence that barn owls are living inside the run down facility. (Mark Patton / S&S)

WACKERNHEIM, Germany &#8212; Before the military renovates an abandoned building on McCully Barracks in Wackernheim, it will have to evict some longtime residents.

Barn owls, a sandy-colored, nocturnal predator, have made their home in the broken-down structure slated for renovation in a multimillion-dollar upgrade of the base.

Since the birds of prey are protected in Germany, the Army will have to give them a permanent change of station before moving on with that part of the project.

&#8220;Since there is habitat on the building and we&#8217;re going to be disturbing the building, we have to compensate for that,&#8221; said Nathan Edwards, a natural resource worker for the U.S. Army Corps of Engineers Europe District.

Engineers plan to construct a barn owl box near the building in hopes the owls will make a new home there.

The base is undergoing $11 million in infrastructure upgrades and facility renovations to convert it to a logistics support hub in anticipation of the U.S. Army Europe headquarters&#8217; move from Heidelberg to Wiesbaden.

Originally built in 1936 by the German air force, McCully now houses the Theater Logistics Support Center &#8212; Europe. Many buildings on the base have been empty since the 1980s and allowed to deteriorate into unusable condition.

&#8220;Had they shut the doors and shut the windows, we would not have a problem with owls here,&#8221; said Gordon Adam, environmental technician with U.S. Army Garrison Wiesbaden&#8217;s Directorate of Public Works.

Edwards said if the owls accept the box, it would avoid a much higher cost that the German government would ask for to find similar habitats for the owls.

For example, a survey conducted before last year&#8217;s start of construction on a housing area adjacent to Wiesbaden Army Airfield determined that the U.S. would pay 1.1 million euros in environmental compensation to be used in the region for nature improvement, according to Sibylle Ballnath, project manager with the Army Corps of Engineers&#8217; Central Europe Project Section.

Ballnath said the figure includes 110,000 euros for the monitoring of wild hamsters found in the area, erecting a hamster fence to protect them and the creation of breeding areas.

McCully was once on the list of bases to be closed, but was pulled off in 2008.

Although the barn owl is not on the threatened list, it has been declining in numbers over the past 20 years, said Alexander Sabais, an environmental engineer with the Wiesbaden garrison&#8217;s DPW.