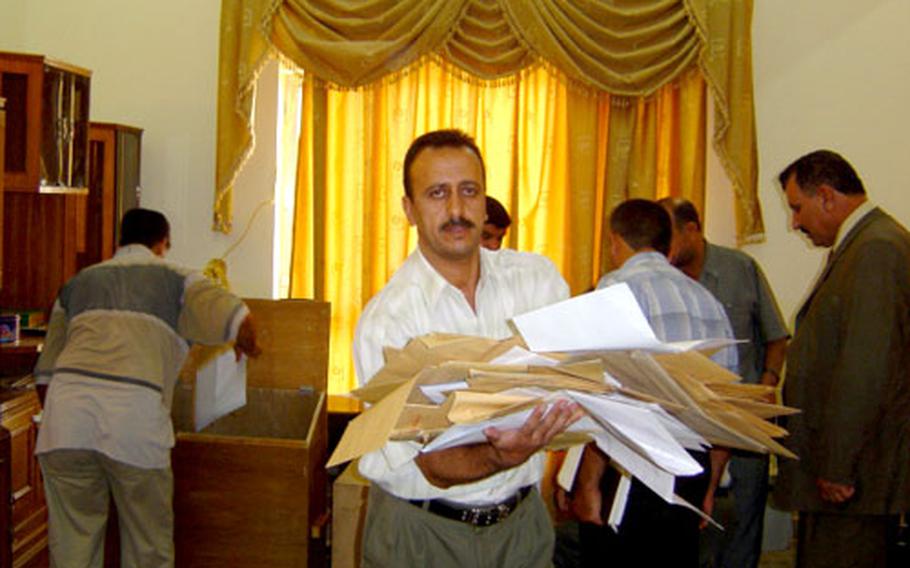 Garrison then backed away from the money and held up his hands.

Garrison&#8217;s gesture left the contractor dumbfounded; what was Garrison&#8217;s cut? The contractor, who was working on a public works project funded through Army dollars, tried to leave $40,000 on the table. Instead, Garrison told him to take it and build a better Iraq.

&#8220;It has been that way with each contractor,&#8221; said Garrison, provincial project manager for the Iraq Reconstruction Management Office, a State Department agency.

There were caveats: The money could not be spent on private companies or individuals and had to pass review by Army Corps of Engineers and Civil Affairs personnel, with support from the U.S. Agency for International Development.

The competitive-bidding process that began a few months ago is a novel approach for contractors in Iraq, who are used to the old regime doling out plum contracts based on bribery and family connections.

The program is an improvement over projects operated completely by the United States because it gets Iraqis &#8212; and Iraqi politicians eager to take credit for civic success &#8212; involved in the process.

&#8220;Ultimately, politicians care about getting re-elected,&#8221; Garrison said. &#8220;Projects tend to legitimize the people who are in office. They also force them to become more aware of the wants and needs of their constituents.&#8221;

Giving governments the legitimacy they need to find stability is the top U.S. goal behind the funding, he said. Although the process happens at the provincial level, the central government in Baghdad influences the bid approval process in subtle ways.

The director-general is a provincial official, but also is a politically connected individual appointed to the post by the central government.

There are other roadblocks to completed projects, Garrison said.

Garrison said he knows of an instance in which U.S. money fell into the hands of Iraq&#8217;s organized crime network 24 hours after disbursement.

The committees and oversight procedures are designed to ensure that as much money as possible goes to qualified, honest contractors, he said. Garrison said he hasn&#8217;t heard of any claims of nepotism but those claims will probably arise eventually.

So far, local Iraqi politicians have praised the program&#8217;s transparency, he said.

&#8220;Tikrit&#8217;s City Council was as bitterly outspoken as anyone about what might be going to nepotism and cronyism,&#8221; Garrison said.

When they saw the results of the competitive-bidding process, &#8220;they were practically giddy,&#8221; he said.

In Salah-Ah-Din province, which includes cities such as Tikrit and Balad, the PRDC spread the $10 million over 146 projects. They range from $1,700 mosque renovations to $123,000 for road paving. School construction and water treatment also play heavily in provincial spending.

Contractors allocate large chunks of funding to security because of threats by insurgents. But U.S. officials say they believe that with a hands-on oversight approach and local political reputations at stake, the PRDC program will yield success stories.

&#8220;I think there is hope that this kind of relatively honest, relatively less corrupt way of doing business will continue,&#8221; Garrison said.