Overseas shoppers are feeling squeezed, too 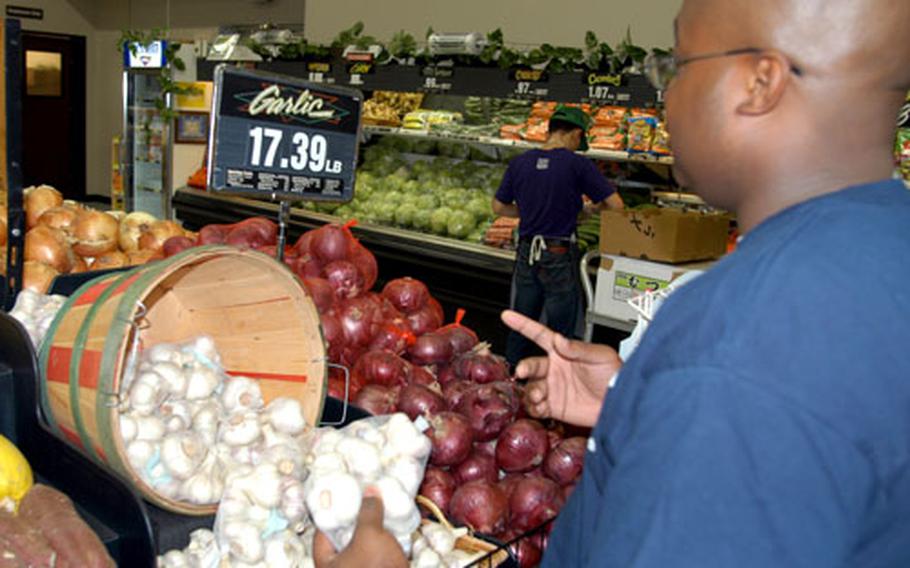 Some customers wince at the price of potatoes. Others are a bit more choosy when it comes to breakfast cereal. One sailor arms himself with a calculator.

U.S. food inflation is running at more than double the normal rate this year, according to Reuters, and economists say it may get worse if energy prices don&#8217;t continue to decline from record highs.

At stateside commissaries, a Defense Commissary Agency survey revealed the cost of groceries, with the exception of meat and produce, is up 2.1 percent for the first six months of fiscal 2008, according to DECA officials.

"The price increases are universal to commissaries located in the United States and overseas," said DECA spokeswoman Nancy O&#8217;Nell in a written response to Stars and Stripes. "This does not include prices on locally purchased items in Japan, South Korea and Guam, which move with the local economy."

Though it takes extra fuel to ship and fly retail items from the States to Pacific overseas commissaries, those unique costs are paid with congressionally appropriated funds and are not passed on to customers, O&#8217;Nell said.

Because of that, commissaries in Japan, South Korea and Guam charge the same prices for national U.S. brand products as stateside commissaries do, she said.

DECA officials didn&#8217;t tie higher retail costs to energy prices. But the agency is required to sell items at cost and therefore passes "all manufacturer price changes &#8212; reductions as well as increases &#8212; directly through to the shelf price," O&#8217;Nell said.

The most significant increase at commissaries has been in dairy products, which showed an overall jump of 7.8 percent during the six-month survey period, according to O&#8217;Nell. Least affected appear to be frozen foods and health and beauty care products, rising 0.5 percent and 0.8 percent, respectively, O&#8217;Nell said.

At the Misawa Air Base commissary in northern Japan, half a dozen customers interviewed Friday said their grocery bills are up.

Nearly all could single out at least one product that seems unreasonably high, though no one mentioned dairy items.

Navy spouse Valerie Neal pointed to cereal and lunch meat. Her family&#8217;s grocery bill has risen from about $150 to $200 biweekly, "not including when you go back during the week because you forgot things," she said.

Larry Fine, a civilian, was still reeling from garlic sticker shock: $17.39 a pound, or about $4.35 for a quarter-pound, single bulb.

"You can buy gas cheaper than that," Fine said.

Though Fine passed on the garlic, he hasn&#8217;t changed his shopping habits much.

"I&#8217;ve learned to accept it," he said. "I think our market is just going through a slump right now because of the uncertainty with oil."

But energy prices, it seems, aren&#8217;t to blame for all food cost increases. The marketplace can be volatile, affected by factors including weather and product availability, according to Misawa commissary managers.

Garlic, for example, is more expensive because the supplier has changed. Instead of China, the bulbs are from Japan, the managers said. And cherries shipped from the United States are always most costly at the beginning of the growing season and should drop in price, they said.

Bread prices also could be on the rise soon.

The Army and Air Force Exchange Service sells baked goods, such as fresh bread, in Pacific commissaries. AAFES spokesman Master Sgt. Donovan Potter said Friday that prices for wheat and flour used by its three Pacific bakeries were going to increase. AAFES hasn&#8217;t determined whether it will raise the price of its bread, he said, adding that the AAFES bakeries sell goods at cost and it would be reasonable to expect retail prices to go up slightly as a result.

DECA officials, meanwhile, said they were taking steps to keep costs down. Systemwide during the past 12 months, DECA has moved from purchasing produce from one worldwide source to contracts with regional produce companies, O&#8217;Nell said.

"The regional companies are finding the freshest local produce at lower prices," she said. "This is delivering a superior value to commissary shoppers worldwide, while in many cases reducing the distance produce travels to reach a commissary."

Some servicemembers on Friday said they&#8217;ve cut back on off-base shopping, because prices seem to have risen even higher in Japanese grocery stores.