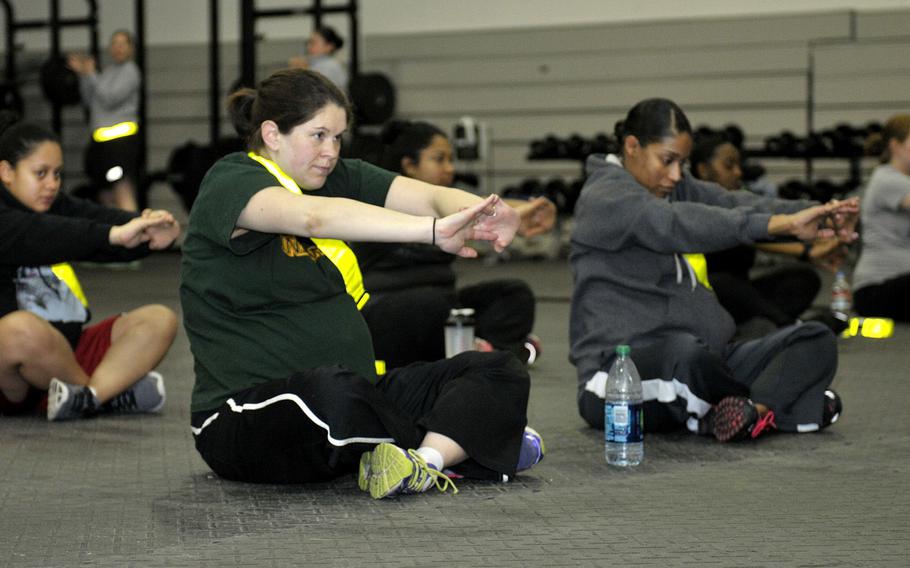 Soldiers in their third trimester of pregnancy perform stretches outlined by the Pregnancy Postpartum Physical Training program Feb. 19, 2014, at Fort Hood, Texas. The program assists soldiers throughout their pregnancy. Defense Secretary Ash Carter announced on Thursday, Jan. 28, 2016, that he plans to give 12 weeks paid maternity leave to female servicemembers and other family-focused changes. (U.S. Army)

NAPLES, Italy— Servicemembers overseas largely welcomed a new Pentagon plan to boost benefits for military parents, many saying the changes were long overdue and some arguing they still fell short of what military families need.

“It’s a long time coming, and it’s expected,” said retired Navy Lt. Cmdr. Melody Fugazzotto, who now lives in Wiesbaden, Germany. “You have more women in the military, in general, and in higher positions than they were before.”

Defense Secretary Ash Carter said Thursday he would set maternity leave at 12 weeks for all services and ask Congress to raise paternity leave to 14 days from 10. The Army and Air Force currently offer six weeks of maternity leave.

Katy Elrod, an Army veteran and mother of two who works for Naval Facilities Engineering Command in Naples said six weeks of maternity leave was never enough for new mothers, physically or emotionally.

“This is the minimum, and I’m really, really happy they’re doing it,” she said.

Female sailors and Marines now receive 18 weeks of maternity leave since Navy Secretary Ray Mabus tripled the benefit in July; they’ll lose six of those weeks when the change goes into effect.

Carter also said he’d increase hours at military day care centers and expand health coverage to include fertility treatment. He plans to ask Congress to increase leave for dual-military families adopting a child and allow some families to postpone a military move due to family reasons.

The changes are part of a broader Pentagon effort to make the services more competitive with the private sector, especially major tech companies that tend to attract top talent by emphasizing work-life balance. Juggling parenthood with a military career has long been a challenge for servicemembers, who, unlike their civilian counterparts, cannot take unpaid leave.

The Navy will honor the 18-week leave for sailors and Marines who are already pregnant or become pregnant within 30 days of the service enacting Carter’s new policy, said a spokesman for the service’s personnel command.

“I don’t think it’s enough time to come to an emotional place where you can take your child to the (Childcare Development Center) and leave them there while you go to work,” said Seaman Jessica Spradley, a hospital corpsman with the Yokosuka Naval Hospital’s OB/GYN Section. “Only 12 weeks of maternity leave is not emotionally easy for moms.”

Capt. Juan Pratts, with the Army’s 266th Financial Management Support Center in Kaiserslautern, Germany, said Carter’s plan to expand daycare hours — from 12 hours a day to a minimum of 14 — might help him juggle his morning schedule. He takes his year-old son to child care on one base when it opens at 6 a.m. and then races to another base for physical training at 6:30. Under the new changes, the center would open at 5 a.m.

Others wonder if longer CDC hours could result in extended work days for parents, as commands realize they can keep them longer.

Servicemembers welcomed Carter’s plan to expand paternity leave, a benefit that has received more attention from servicemembers in the past year.

“Right now, we’re only getting 10 days, and those first few days are really hard for the moms to be by themselves with the kid,” said Sgt. Jean Paul Ramos, with the 21st Theater Sustainment Command in Kaiserslautern. “So I would say, yes, it would definitely benefit the couple.”

Other servicemembers supported Carter’s proposal to allow postponement of a duty station move for family reasons, such as sickness or school. Congress would need to approve that scheme, which would require an additional service obligation not spelled out in Carter’s plan.

Proponents of the changes, like Elrod, say they push the military in the right direction — and make it a trailblazer for the rest of the country, where maternity and paternity leave are still rare for many jobs.

“The military doing this is incredibly important because we’re setting the standard,” Elrod said.