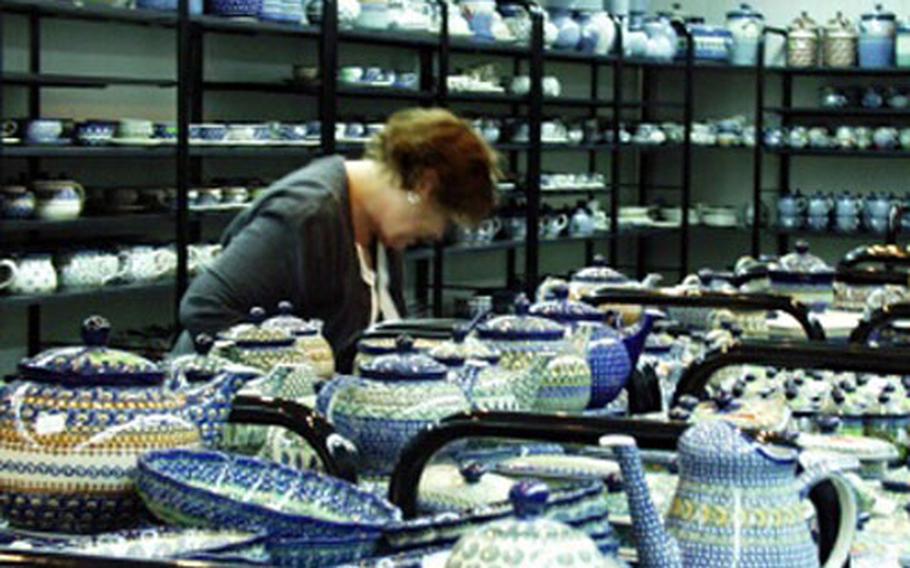 A pottery factory in Boleslawiec, Poland, where military personnel and Department of Defense civilians and their dependents buy many of the items they then sell on the Internet. A plate bought at the factory for $5 can sell for more than $35 on eBay. (David Josar / S&S)

Three summers ago when Jamie Lohr&#8217;s husband got orders to move to Germany, she knew what her new job would be.

Within a month of arriving, Lohr made her first eight-hour drive from Landstuhl, Germany, to Boleslawiec, Poland, and filled the family Ford Explorer with $500 in bowls, plates and serving platters.

Lohr also is a stickler for following the law, and that meant she would use the German postal system and pay the German value added tax for everything she sold. The Military Postal Service, due to agreements reached with host-nation countries, cannot be used to operate a business or ship items that are being sold.

The 41-year-old mother of three quickly discovered she was being penalized for following the rules.

Other military personnel, dependents and civilian employees and their families who could use the Military Postal Service also sold products on eBay, but instead of following the regulations, they relied on the military to deliver their items. As a result, they charged customers about $15 less or even more than if they used the host-nation postal system.

For example, in November, people sold more than 3,000 items &#8212; ranging from Polish pottery to World War II medals to Christmas ornaments &#8212; on eBay and shipped them using the military mail system, according to a search of the eBay Web site.

Not only do these eBay sellers undercut the prices of military and family members who follow the rules, but they also clog up an already overburdened mail system about to hit the holiday crush.

Military officials say they are unaware of any problem with misuse of mailing privileges and only rarely has anyone been reprimanded.

A spokeswoman with the Installation Management Agency-Europe said mail personnel are trained on the proper use of the military postal system, and that military identification card holders who abused the system have been caught.

In the last fiscal year, for example, according to IMA spokeswoman Millie Waters, investigators discovered 23 people who illegally used their mailing privileges. Still, Waters added that the incidents are not &#8220;recorded or tracked,&#8221; and there is no specific information about those incidents.

While 23 people were snagged for improper use during fiscal 2003, eBay statistics show that roughly 25,000 items sold via its Web site were shipped from Europe to the United States through the military postal system.

A person who misuses the mail system could lose the privileges and face punishment from the civilian misconduct board or military justice system, Waters said. Abusers also could face thousands of dollars in fines from the German and American governments. The prohibition also extends to people who want to have items like Pampered Chef products, which are resold to friends and neighbors, shipped to their military post office box.

Waters could not provide details of a single person disciplined for mail system misuse.

A spokesman for German customs and tax officials, meanwhile, are shocked that they have not been informed of the cases uncovered by military police and customs officials.

&#8220;This is clearly something we should have been told about,&#8221; said Heinz Precht, a spokesman for the German Finance Ministry in Stuttgart, Germany. &#8220;People are avoiding taxes. They are using a privilege for personal gain. This has to stop.&#8221;

Military police and customs officials, who are responsible for monitoring what is shipped through the mail, declined to be interviewed, Waters said.

Military personnel and dependents who follow the regulations as well as nonmilitary personnel who use eBay are incredulous of the military&#8217;s statement that misuse of the mailing system is not a problem.

&#8220;Every day, I look and find more and more people blatantly using the military mail,&#8221; said Tony King, a military spouse from Stuttgart who specializes in selling pottery on eBay.

He noted that November and December is the crunch-time for the mail system and with troops deployed to the Middle East, the military should work to make sure the people using military mail are only using it the way it was designed. King said he could easily use the eBay search engine to find people using APO boxes for business purposes.

He, too, wants a level playing field.

A look at the eBay Web site backs up the claims of Lohr, King and others.

During Thanksgiving week, 30 people who lived in Europe used the military postal service to ship items they were selling on eBay.

Most of them were people who sold a hundred or more items annually.

There is &#8220;calcardfan&#8221; &#8212; a 17-year Air Force veteran stationed in Kaiserslautern, Germany &#8212; who in the past month auctioned 38 pieces of Polish pottery on eBay and shipped them to the United States using the military postal service. His picture is posted on his Web site, where he also tells people that although he lives in Europe, his mailing address is &#8220;not really overseas&#8221; and shipping charges are no different than if he were in New York state.

Stars and Stripes wrote e-mails to 15 people, including those referred to in this article, who sold items on eBay but used the military postal service to ship their items. Only one, Lee Wheeler, who sells as &#8220;oma2max,&#8221; would talk about her business.

Wheeler, the spouse of a Department of Defense contractor in Stuttgart, has been using eBay to clear her house of the hundreds of items she has purchased while living overseas, she said.

She said she never had a problem or had been asked a question when she has shown up at the Patch Barracks mail room with a stack of boxes and completed U.S. customs forms.

Wheeler said she was not aware of any prohibitions about using her mail privileges to sell items.

Since 1999, according to eBay, Wheeler has shipped nearly 300 items using the military mail. Most of the items, according to eBay listings, are found at flea markets, such as Villeroy & Boch platters or Staffordshire teapots and cups.

In October, for example, Wheeler sold a large German pewter porringer for $13. She charged $7.80 for shipping.

In addition to frustrating military personnel who use the German postal system and pay German taxes, the unfettered use of the military postal system being used to ship eBay items also frustrates German eBay sellers and sellers in the States.

Krause, who began selling Polish pottery and hand-sewn German tablecloths in 2000, estimated that as many as 15 percent of the people in Germany who auction items on the U.S.-based eBay site use the military postal system.

As an example, Krause pointed to the pewter porringer that Wheeler sold and charged just $7.80 for shipping. At a minimum, Krause explained, to mail that item to the United States via the German post would cost the equivalent of $25.