Against the backdrop of a runaway national deficit and massive increases in defense spending, several lawmakers are calling for the elimination of one Army Brigade Combat Team in Europe, one Air Force fighter wing overseas, and two reinforced Marine Corps infantry battalions in Asia. An earlier round of troop reductions closed Harvey Barracks in Kitzingen, Germany. (Michael Abrams/Stars and Stripes)

Against the backdrop of a runaway national deficit and massive increases in defense spending, several lawmakers are calling for the elimination of one Army Brigade Combat Team in Europe, one Air Force fighter wing overseas, and two reinforced Marine Corps infantry battalions in Asia. An earlier round of troop reductions closed Harvey Barracks in Kitzingen, Germany. (Michael Abrams/Stars and Stripes) 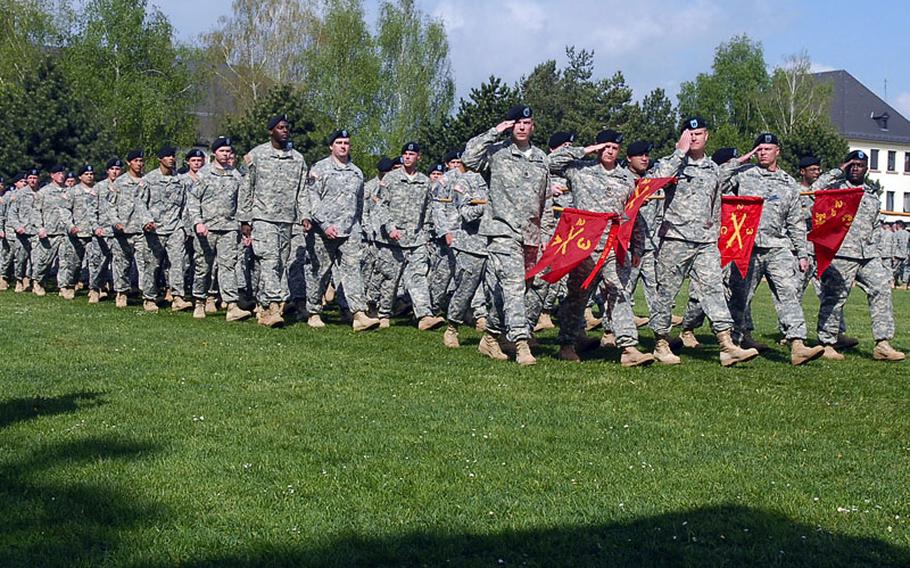 Soldiers of the 1st Armored Division's 1st Brigade Combat Team pass in review at the end of the casing-of-the-colors ceremony for the BCT in Friedberg, Germany, in 2007. Against the backdrop of a runaway national deficit and massive increases in defense spending, several lawmakers are calling for the elimination of one Army Brigade Combat Team in Europe, one Air Force fighter wing overseas, and two reinforced Marine Corps infantry battalions in Asia. (Michael Abrams/Stars and Stripes) An F-16 Fighting Falcon takes off from Spangdahlem Air Base, Germany. Against the backdrop of a runaway national deficit and massive increases in defense spending, several lawmakers are calling for the elimination of one Air Force fighter wing overseas, one Army Brigade Combat Team in Europe and two reinforced Marine Corps infantry battalions in Asia. (Michael Abrams/Stars and Stripes)

STUTTGART, Germany &mdash; As the Army&rsquo;s transformation in Europe moves forward, with a string of base closures planned in the year ahead, a group of lawmakers has launched a campaign to further cut the U.S. military presence in Europe and Asia.

Against the backdrop of a burgeoning national deficit and years of massive increases in defense spending, the restructuring plan meant to save taxpayers $80 billion in overseas military spending has reignited the debate in Congress over the future of U.S. military bases abroad.

&ldquo;I do not think we should be spending money to have troops in Germany 65 years after World War II. We have a terrible deficit and we have to cut back,&rdquo; said Rep. Barney Frank, D-Mass, who is spearheading a House effort to cut defense spending. &ldquo;NATO was a wonderful concept. But 61 years later, I think it&rsquo;s time to say our western European allies should be on their own. We&rsquo;ll cooperate with them, but we shouldn&rsquo;t be subsidizing their defense.&rdquo;

Frank and several other lawmakers are calling for the elimination of one Air Force fighter wing overseas, one Army brigade combat team in Europe and two reinforced Marine Corps infantry battalions in Okinawa as part of a proposal to shave $1 trillion from defense spending worldwide over the next 10 years. The plan also would curtail spending on many expensive weapons systems. Frank hopes the recommendations will be included in next year&rsquo;s Deficit Reduction Plan, which is being drafted by an 18-member commission assembled by President Barack Obama and has a Dec. 1 deadline.

Calling for an examination of the size of the Pentagon funding within the overall budget.

But sweeping attempts at defense spending reform is a long way from becoming a legislative reality and will likely face strong resistance. Defense Secretary Robert Gates and the White House have run into repeated opposition to spending cuts for major weapons systems and &ldquo;wasteful&rdquo; military programs in recent years. Republicans in the House have argued for an overall increase in defense spending, and joined with moderate Democrats to block cuts in missile defense and the F-35 Joint Strike Fighter program &mdash; two items scheduled for cuts in Frank&rsquo;s proposal.

Drew Hammill, spokesman for House Speaker Rep. Nancy Pelosi, said &ldquo;all spending, including the Defense Department, must be subject to scrutiny&rdquo; but would not offer any specific backing to Frank&rsquo;s plan.

The U.S. military is shrinking its footprint in Europe by consolidating a number of bases into five main hubs. It recently announced the closure of 22 Army installations between 2010 and 2015. But leaders have been resistant to eliminating Army brigades, saying that those forces are needed to work with Europe allies and deter threats.

In addition to Frank&rsquo;s proposal, politicians on both sides of the aisle are zeroing in on expenditures abroad. For instance, Sen. Kay Bailey Hutchison, R-Texas, an advocate for relocating more troops stateside, says too much money is being spent on overseas base construction projects.

&ldquo;If the United States really wants to assure our allies and deter our enemies, we should do it with strong military capabilities and sound policy &ndash; not by keeping troops stationed overseas, not siphoning funds from equipment and arms and putting it into duplicative military construction,&rdquo; Bailey said during a July 13 speech on the Senate floor.

To be sure, more lawmakers are questioning strategic assumptions that have long escaped serious challenge.

At the heart of the argument over Europe is whether a large-scale American military presence on the continent is an outdated Cold War relic or a vital piece in a much larger strategic puzzle.

Much of U.S. European Command&rsquo;s work centers on programs to help U.S forces work alongside other nations deployed in places such as Afghanistan. And soldiers in Europe regularly work with European militaries to bolster their capabilities. Many of those countries, particularly in eastern Europe, provide regular rotations of troops to Afghanistan.

There are advocates in Congress for a robust presence in Europe.

The NATO First Act, a bipartisan House bill introduced last year, would maintain the current basing structure in NATO-member countries in Europe unless a host nation requests closure or the U.S. defense secretary deems such facilities unnecessary. The bill also would increase funding for joint training initiatives with NATO allies.

Those supporters argue that Russia&rsquo;s 2008 invasion of Georgia underscores the need for a continued troop presence in the region and serves as deterrence for potentially similar aggression in the future.

The United States &ldquo;may need to strengthen its posture and not decrease its presence in Europe,&rdquo; said Rep. Michael Turner, R- Ohio, a NATO First sponsor, during a panel discussion earlier this year on force structure.

The Sustainable Defense Task Force, the group of defense analysts established by Frank, released its finding in June.

The task force&rsquo;s report &mdash; Debts, Deficits and Defense: A Way Forward &mdash; contends that significant cuts can be made without compromising national security.

Frank says there is no longer any reason to keep Marines in Okinawa in an age when the central security threat facing the U.S. is terrorism, not a conventional war in east Asia. Moving the Marine command elements, including 8,000 Marines and their families, from Okinawa to Guam has been in the works for years. The target date for the transfer is 2014.

&ldquo;The question that motivated us was, &lsquo;What is most essential for our defense?&rsquo; Our assessment is there is no likely contingency in Europe that will ever require a deployment of troops the size we have there,&rdquo; said task force member Carl Conetta, co-director of the Project on Defense Alternatives. &ldquo;There is both cost and risk, but you have to weigh it against the economic problems we are facing. The financial problem is a national security problem and we need to make sure we have capacity for the long haul.&rdquo;

At issue during the course of this debate in Europe will be how political leaders view Russia, which launched a sudden invasion of Georgia in 2008, stunning EUCOM military leadership.

Russia&rsquo;s intentions are unclear, but Europe would most likely respond in different ways to a reduced American presence, according to Paul Ingram, executive director of the British American Security Information Council, which examines trans-Atlantic security and arms control issues.

&ldquo;Western Europeans would be quite comfortable with an American drawdown. If you look at the military doctrines of any western European government, they don&rsquo;t perceive any threats beyond terrorism [and] the proliferation of weapons. No one is concerned about invasion,&rdquo; said Ingram. &ldquo;But it&rsquo;s very different in central and eastern Europe where a significant drawdown of conventional forces would be seen as problematic by them.

Despite the end of the Cold War there is still a perceived threat from Russia.&rdquo; While Europeans are divided on the Russia threat, so are American politicians.From Frank&rsquo;s perspective, the concept of reassuring allies from a Russian threat is a case of &ldquo;cultural lag.&rdquo;

At this point, European countries &ldquo;are big enough and rich enough to reassure themselves,&rdquo; Frank said. &ldquo;Secondly, no one knows what we are reassuring them against. There is no more threat.&rdquo;