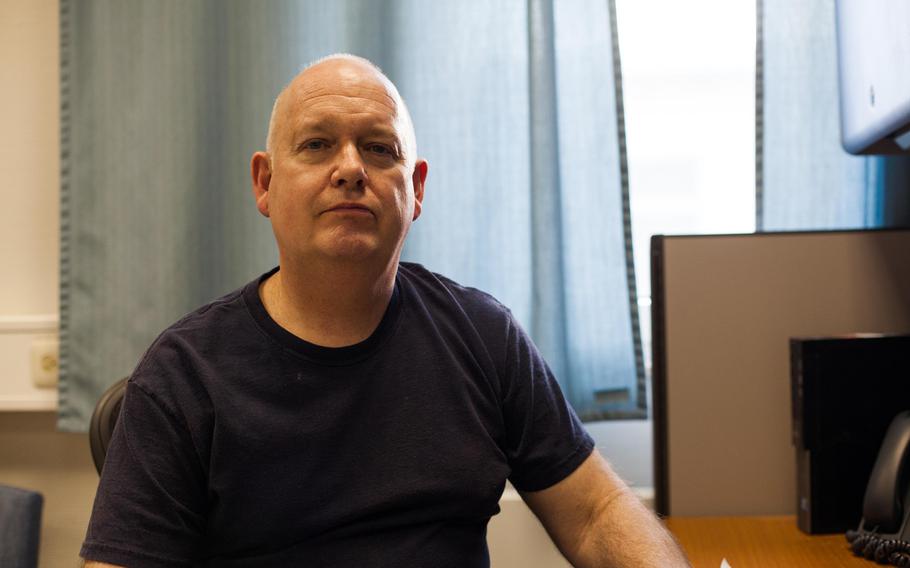 Army clinical psychologist Stephen Fitzgerald, a Navy reservist, is about to lose his Living Quarters Allowance because he was in Germany when he applied for his Army job. He was only in Germany, he said, because the Navy deployed him there to work at Landstuhl Regional Medical Center. (Matt Millham/Stars and Stripes)

KAISERSLAUTERN, Germany — Like hundreds of Defense Department employees overseas, Stephen Fitzgerald is about to lose his housing allowance.

Unlike most, though, he says he’s in this mess because he was on active duty overseas — where the Navy put him — when he applied for his overseas job.

“I’m being discriminated against for being a reservist,” said Fitzgerald, a captain in the Navy Reserve and civilian clinical psychologist for the Army.

The Army’s revocation of Fitzgerald’s Living Quarters Allowance stems from an audit of LQA recipients that found 659 employees were getting the allowance erroneously.

Oddly, were Fitzgerald to apply for the same job he’s in today in the same circumstances he was in when the Army offered him the psychologist job in 2012, he’d qualify for LQA, according to an Army decision that ultimately denied him the benefit.

The same goes for Patrick Djondo, an Army civilian in Korea who applied for his current position while stationed in that country as an active-duty soldier.

“I wasn’t in Korea on my own” when applying for the job in 2009, Djondo said. “I was sent here by the government.”

As far as the Army’s concerned, that doesn’t matter.

In paperwork denying both men’s claims for reinstatement of their LQA benefits, the Army has cited its definition of “United States hire” prior to Sept. 19, 2013, when the Defense Department issued a memo clarifying the term in response to another LQA claim.

That memo states: “Temporary absences from the U.S. for reasons such as vacations, temporary duty assignments (including the private industry equivalent) or deployments by Reservists and National Guard members do not alter a person’s ‘U.S. hire’ status, as contained in DoDI 1400.25-Volume 1250,” which governs eligibility for overseas allowances and differentials.

Prior to the memo, any absence from the U.S. or its territories during any phase of the hiring process — when applying, interviewing or being offered the job — disqualified candidates from receiving LQA.

The memo denying Fitzgerald’s request for reconsideration states that the circumstances of his 2012 hiring “may be reconciled with the newly developed provisions. However, because the clarifying guidance is to be applied prospectively, we are unable to consider you eligible for the allowance.”

In other words, the Army contends that the Defense Department’s clarification of the definition of “U.S. hire” applies only to those who were hired after the Sept. 19, 2013, memo.

A separate memo to Djondo refusing to reconsider the revocation of his LQA — which he received for more than three years before the audit — contains similar language.

He’s been told to pay the Army back for its mistake — nearly $77,000. He’s applied to have that waived and is still waiting for an answer.

Civilians who applied for jobs overseas while temporarily abroad also have been affected. Others who have been denied LQA or had it revoked after receiving it were disqualified for a different reason, stemming from a reassessment of the circumstances under which locally hired employees are eligible for LQA.

Fitzgerald and Djondo both said they understand that LQA is a recruitment incentive, not an entitlement.

“But that’s why I signed the paperwork” accepting the job, Fitzgerald said. “You gave me that. And so I thought we had a contract here. And now you’re breaking the contract.”

Had Fitzgerald not deployed to Germany in 2011 and stayed instead working for the Department of Veterans Affairs in Florida — his previous job — he’d have qualified for the allowance.

But he didn’t duck the deployment, he said. “I honored my obligation to my country. Why can’t they honor theirs?”

Djondo, who retired from the Army in 2009 while stationed in Korea, said unlike many caught up in the LQA audit, he didn’t try to homestead overseas. The Army sent him and his belongings back to the U.S. as soon as he separated.

“I didn’t have any intention of coming back to Korea,” he said.

But while going through the Army Career Alumni Program — a requirement for separating soldiers — he put together a resume and applied for Army jobs in Korea as part of the program, with no expectation of an offer. But when he was offered a job with LQA, he took it. Nobody ever said that, by applying from overseas, he would be forfeiting benefits he’d qualify for had he applied from the U.S., he said.

“Now I’m getting penalized for following, verbatim, what the Army has set out for me to do as part of the … separation process.”