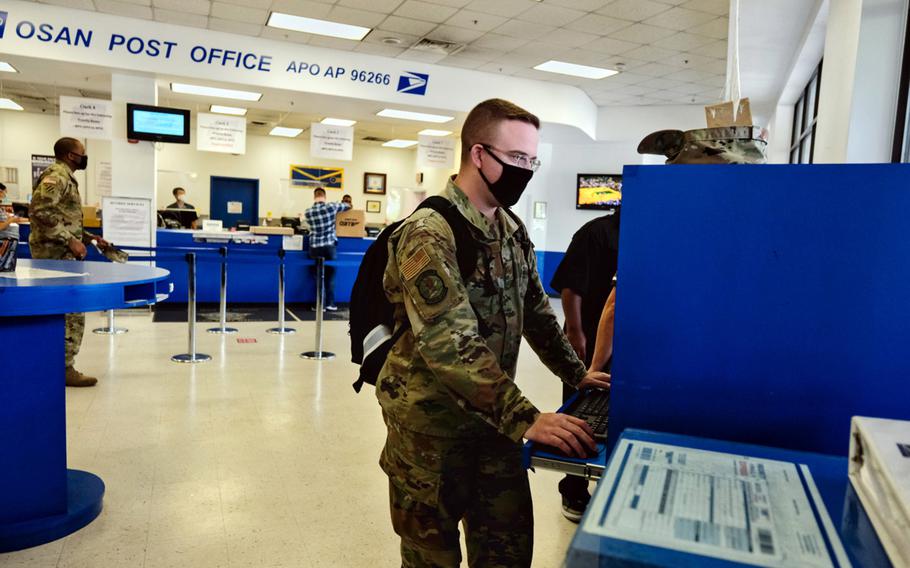 Buy Photo
Staff Sgt. Dustin Traylor of the 51st Fighter Wing uses a computer to fill out a customs form inside the post office at Osan Air Base, South Korea, on June 16, 2020. After months of delays, the requirement to use electronic custom forms at military post offices overseas was implemented Thursday, Sept. 3. (Matthew Keeler/Stars and Stripes)

This story has been updated to reflect that the Postal Service has extended the date after which packages found in the mail with handwritten customs forms will be returned to sender. The new date is Oct. 2, instead of Sept. 13.

KAISERSLAUTERN, Germany — After months of delays, the switch to electronic customs forms at military post offices overseas was made Thursday without advance notice to customers in some areas.

The requirement “to complete online customs forms takes effect today,” U.S. Army Europe said in a statement Thursday. “The required systems are all operating, and clerks will no longer accept handwritten forms.”

The change is expected to cause longer lines and wait times, military postal officials have said.

The Postal Service began transitioning to electronic customs forms in March due to international regulations but granted military post offices an extension.

Military post offices in Europe and the Pacific were set to roll out the new requirement Aug. 13. Many installed computers, printers and scales so customers could print customs declaration forms at the post office.

But shortly before the launch, the change was postponed “until further notice,” because of the Postal Service’s “discovering new issues with the process,” the postmaster at Yokota Air Base in Japan said at the time.

The Sept. 3 start wasn’t publicized as widely. The post offices at Yokota and Kadena Air Base in Okinawa put out a notice of the new date last week on their Facebook pages.

In Germany, Ramstein/Kapaun Postal Operations announced the switch Thursday on its Facebook site, apologizing to customers for the abrupt change.

“Due to technical difficulties and administrative oversight, our new CUSTOMS FORM roll out started today … and you our customers were not properly informed,” the post said.

Base officials said Thursday that the new process was in use.

“So far, we have not experienced any feedback from customers not happy with it,” said Kilian Bluemlein, a Ramstein spokesman.

Packages found in the mail with handwritten customs forms after Oct. 2 will be returned to the sender, officials said.

Electronic labels can be completed at kiosks at military post offices or created and printed at home.

Those who know the weights of their packages can pay their shipping costs online and drop off their packages after clerks confirm the sizes and weights, officials have said.

Customers can still fill out handwritten customs worksheets when they mail their packages, but postal workers will need to type in all of the details to create electronic labels.