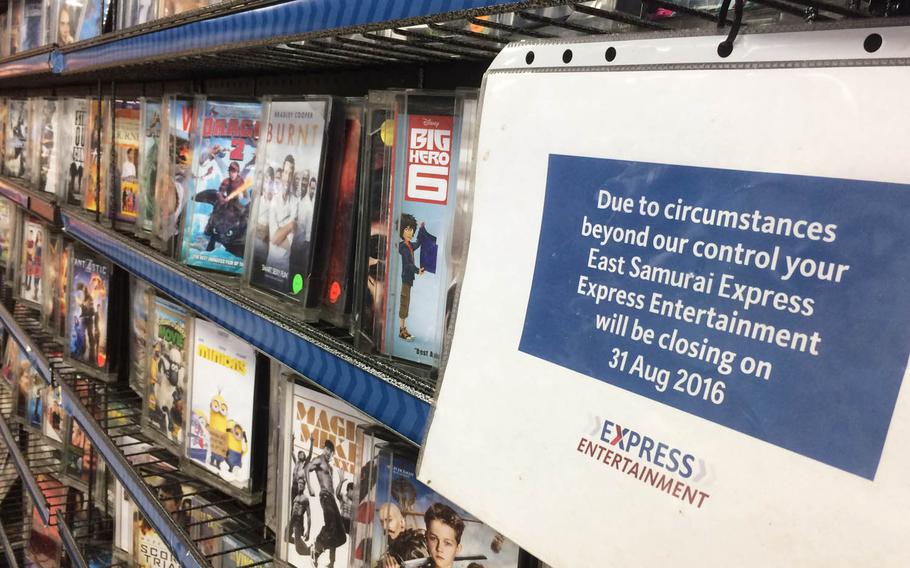 Buy Photo
Army and Air Force Exchange Service stores in Japan have posted notices informing customers that DVD rentals will end Aug. 31, 2016, due to "circumstances beyond our control." The growing popularity of online streaming video services such as Netflix and Hulu is sounding the death knell for DVD rentals at AAFES outlets overseas. (Seth Robson/Stars and Stripes)

The growing popularity of online streaming video services such as Netflix and Hulu is sounding the death knell for DVD rentals at AAFES outlets overseas.

Army and Air Force Exchange Service stores in Japan and Europe will no longer offer DVD rentals in part because Softland, the company that had supplied overseas stores with DVDs, is going out of business, said AAFES spokesman Chris Ward.

“Since customers have largely migrated to on-demand options or streaming options versus renting, the Exchange will no longer offer rentals,” he said in a statement.

DVD rentals will end on Aug. 31, Ward said, who noted that customers have largely migrated to on-demand options or streaming options instead of renting.

In the United States, more than 100 military installations offer Redbox vending machines for DVD rentals, Ward said. Customers use a touchscreen to select a movie and later return it to the machine.

However, options are more limited overseas, where the DVDs that can be rented off base are often in the language of the host country.

There are also restrictions on off-base streaming services that can affect personnel stationed overseas. Netflix, for example, announced in January it would increase efforts to prevent customers from circumventing geographic restrictions using a VPN or similar masking technologies.

Johna Otis, of Gulfport, Miss., a nurse for the 374th Medical Group at Yokota Air Base, said she’d miss renting DVDs from AAFES.

“We rent about twice a month,” she said. “My husband likes to watch new releases.”

Otis said that her family watches Netflix and Hulu but that the services don’t have the newer films available from AAFES.

In Europe, opinions on the phasing-out of rentals were mixed. Younger servicemembers like Pfc. Stephen Rodriguez haven’t had much use for DVD or Blu-Ray rentals. In fact, Rodriguez, who is with the 10th Engineer Battalion, said he’s cut the cord almost completely, relying instead on his smartphone for his streaming needs.

“Generally, I go on Netflix,” he said. “If the movie isn’t on Netflix, I can go to the iTunes store and they’ll usually have it.”

Others say that English-language entertainment options are already limited and that this move will upset some sacred family rituals.

“I don’t agree that they should do it because I let my daughter once a week go ahead and actually pick a movie from the section,” said Ashley Sik, wife of a 2nd Cavalry Regiment soldier based in Vilseck, Germany. “It affects family movie night ... I don’t think they should do it all.”