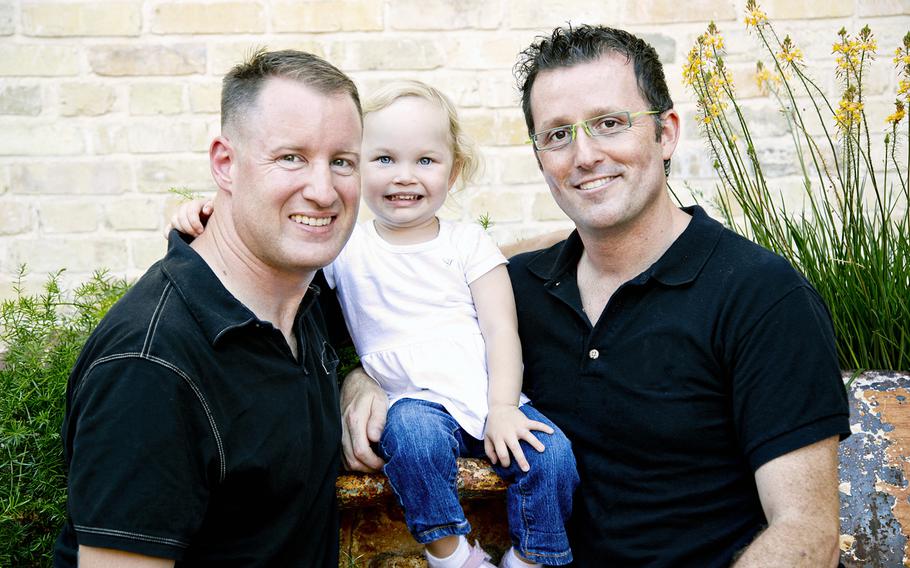 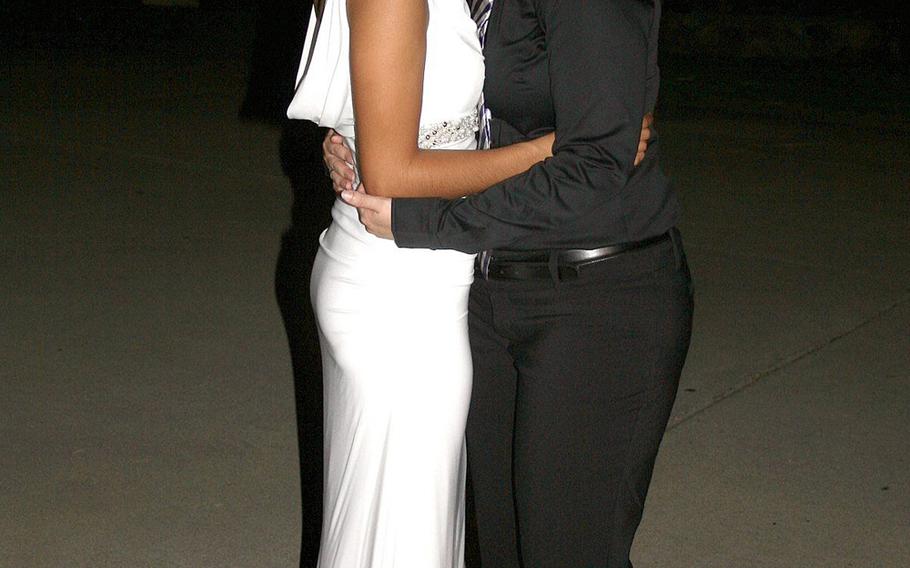 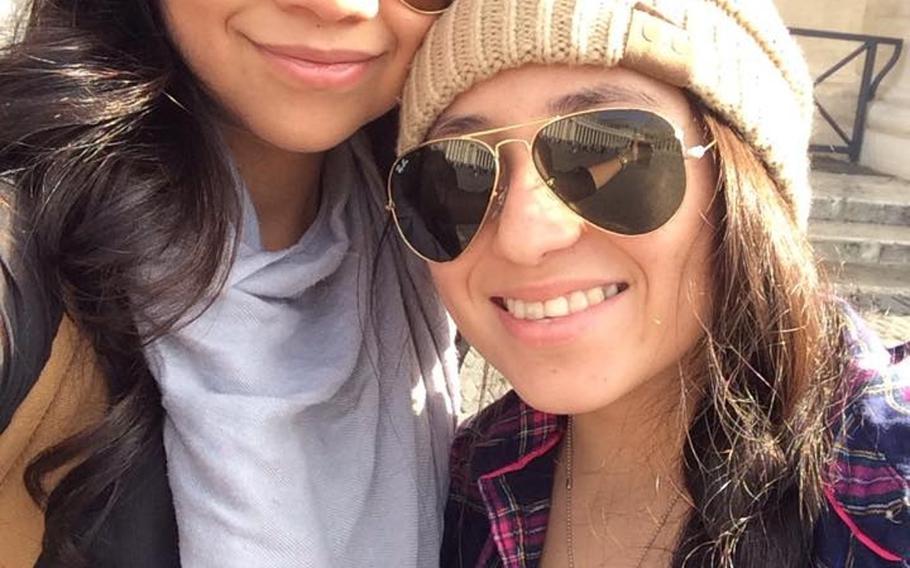 NAPLES, Italy—Faith Dougherty arrived in Italy in 2013 with her pregnant Navy-officer wife and an expectation the military would support them like any other family.

She quickly learned that wouldn’t be the case. Denied military sponsorship for an Italian visa, Dougherty was forced to return as a student and enroll in Italian language classes. Because she wasn’t put on her wife’s military orders, she was barred from using military travel and had to pay for her own flights. She might have been kept from on-base housing — had the base commander not been one of the couple’s biggest supporters.

“We exhausted everything,” said Dougherty, 35, after her family left Italy in 2014, two years earlier than planned. “We were paying as much money as we had to. We were doing everything we could to keep me in the country.”

Dougherty’s story is similar to those of other same-sex spouses who have tried joining DOD employees overseas in the past year and a half. When the Supreme Court discarded parts of the Defense of Marriage Act on June 26, 2013, it opened the door to housing and other benefits for same-sex spouses of federal employees, including servicemembers and civilian workers in the Defense Department. But the military has delayed extending certain benefits common to spouses overseas, including official passports, visas and housing allowances, citing the need to first check for sensitivities with host nations.

Overseas benefits remain off-limits to same-sex spouses in Germany, and their status is unclear in Korea, two countries that together host more than 90,000 troops and civilians. Progress has been slow in other countries, including the Netherlands and Belgium, the first two countries in the world to legalize gay marriage. Command sponsorships were offered in Italy beginning last summer—the same week the Doughertys left the country.

A Defense Department spokesman said officials continue to work with the State Department on the issue.

“This has been an evolutionary process since the Supreme Court’s ruling,”, Lt. Col. Nate Christensen said.

Those affected say they’ve been forced to choose between family and assignments beneficial to their spouse’s career. Some say the military should have anticipated the issue before it arose and then provided better guidance to components after the ruling, preventing haphazard interpretations of DOD policy.

“Some detailers and branch managers have been very supportive and sympathetic and have changed orders,” said Ashley Broadway, president of the American Military Partner Association, which advocates for gay rights in the military. “The problem, in my opinion, is there hasn’t been clear direction from the Pentagon to the various branches about this issue.”

The Supreme Court decision changed the federal definition of the word “spouse,” a term used in most basing agreements between the U.S. and host nations but rarely, if ever, defined in those documents.

In August 2013, the military delayed command sponsorships for same-sex spouses overseas as it reached out to host nations, concerned that some might not agree to a similar interpretation of the SOFA. In the meantime, units in the U.S. were told to make sure their personnel were eligible to bring a spouse overseas, and human resources commands were instructed not to issue passports or plane tickets in cases when they weren’t.

Administrators didn’t always get the message. Senior Airman Melissa Monique Garcia-Rubio, 25, received two-year orders to a military police detachment in Sigonella, Sicily, in August 2013, and was told to put her wife on the documents. A month and a half before leaving, she was informed the tour would be unaccompanied.

Theresa Mueller, 38, was issued an official passport before joining her wife and three children in Germany in May. She was then told she’d have to pay for the plane ticket because she was ineligible for military travel. Mueller’s family still doesn’t receive the full housing allowance, she said, and she remains concerned someone could take her passport away.

In Korea, gay spouses were initially denied access to the commissary and exchange because officials considered those privileges part of command sponsorship, a decision reversed in December 2013.

Confusion was widespread among commands, said Broadway, who is married to an Army lieutenant colonel.

“JAG attorneys contact me weekly asking me for guidance as they are trying to assist servicemembers with this very issue,” Broadway wrote in an email last summer.

Dougherty assumed she would need to wait a few weeks before applying for a residency permit following her arrival in Italy with her wife, Lt. Liza Dougherty, in July 2013, shortly after the DOMA ruling. The wait instead dragged on, with little word from officials. As Liza Dougherty, 32, entered her third trimester, Faith Dougherty returned to the U.S. to apply for a student visa to replace her tourist visa, paying for her own ticket.

Things remained difficult after her return to Italy. Her class requirements kept her from staying home with her newborn son, as the couple had planned. When the Navy rejected Liza Dougherty’s request for an exemption to the command sponsorship policy. The couple started looking for a way out, but Doughtery’s detailer turned down an initial request for new orders, relenting only after the officer’s boss, then-base commander Capt. Scott Gray, became involved.

“We had the benefit of a boss that stood up for me and went to bat for me and made sure the right things happened for our family, but there are so many other people in Italy who were in our spot,” Liza Dougherty said. “Maybe those who don’t have the financial resources we have.”

Forty countries have agreed to recognize same-sex spouses since 2013, according to the Department of Defense. Another 64 have either rejected recognition or weren’t formally even asked based on cultural attitudes toward the issue.

But progress has come at different rates. By the time Faith Dougherty’s tourist visa expired in the fall of 2013, U.S. officials hadn’t reached out to the Italian Foreign Ministry Affairs, according to a ministry official. That would happen at the end of the year, and it would take Italian officials another six months to approve the matter.

Other responses haven’t been as clear. Korea has given no guarantees it will grant visas for same-sex spouses, but anecdotal accounts suggest that some requests are being approved.

Germany, which has not legalized gay marriage, is asking the U.S. to recognize its domestic partners as spouses under the SOFA, a request it made last March. As of last November, it had yet to hear back from U.S. officials on the subject, a ministry representative said. A potential problem could be that the U.S. can’t guarantee equal treatment of gay spouses across the U.S., given the disparity in state laws, and Broadway said the military hasn’t responded to her questions on the issue. She said she isn’t sure how to answer the regular emails from those mulling assignments in the country.

“We just don’t know what to advise folks to do,” she said.

The Netherlands, the world’s first country to legalize gay marriage, remains closed to command sponsorships for reasons that remain unclear. Belgium was added to the list of countries where command sponsorship is available at the beginning of November. A legal advisor for the Belgian defense ministry, Nicolas Lange, said the U.S. must decide who it considers a dependent, not Belgium.

Chris Jenks, a former military lawyer who once headed the international law branch for the Army, agreed, saying that under diplomatic custom the U.S. should determine who is a military dependent under the SOFA.

“The sending state determines who are ‘spouses’,” he wrote in an email. “So when a U.S. servicemember arrives in a NATO country, (dependents) have documentation from the U.S. military that identifies them as a ‘member of the force’ for the purposes of the NATO SOFA… not documentation that they are either the spouse or the child of the servicemember.”

Others, like Dru Brenner-Beck, a retired Army lieutenant colonel who served as chief of the military and civil law division at U.S. Army Europe from 2001-2003, says the military is being appropriately cautious. Diplomatic protocols go back centuries, she said, while foreign military basing is more recent and a much more delicate subject in most countries.

“The various countries are quite sensitive about expansive interpretations [of the Status of Forces Agreement] because of the extensive privileges given to those with SOFA status,” she said.

Whatever the reason, families like Mueller’s, the civilian in Germany, continue to wait for a resolution, their frustrations growing.

“Some days I just want to be done with it and go home,” she said. “We spent a fortune to come over here.”