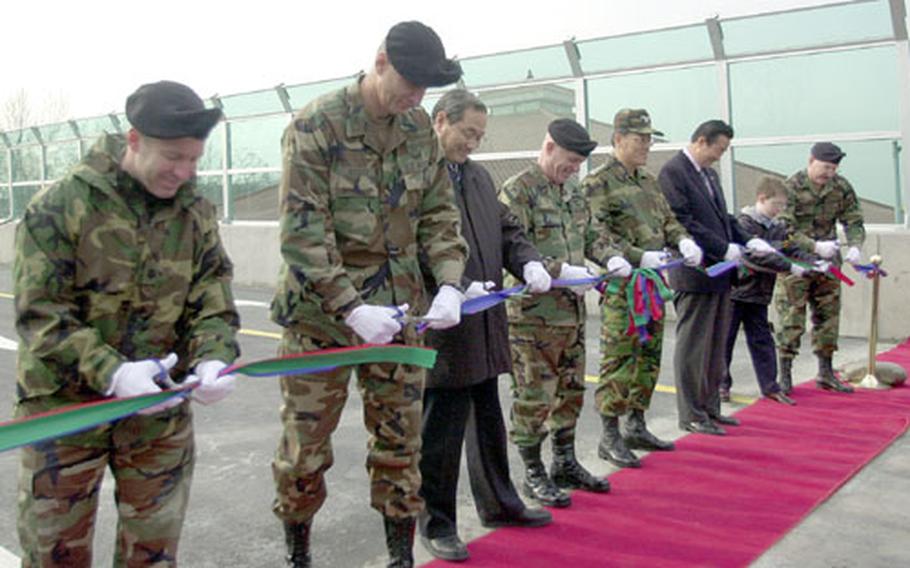 Dignitaries cut the ribbon before the new Yongsan Garrison overpass is opened to the public. Officials say the overpass will greatly reduce traffic both on and off base. (Joseph Giordono / S&S)

Dignitaries cut the ribbon before the new Yongsan Garrison overpass is opened to the public. Officials say the overpass will greatly reduce traffic both on and off base. (Joseph Giordono / S&S) 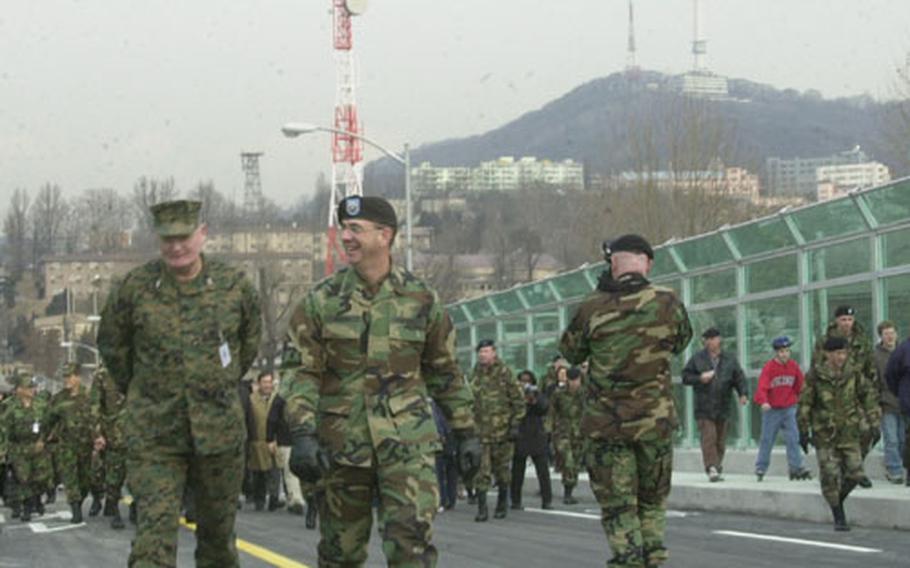 With the Seoul Tower as a backdrop, members of the Yongsan Garrison community take their first walk across the new overpass connecting Main Post and South Post. After a New Year&#39;s Eve ceremony, the overpass was officially opened to traffic. (Joseph Giordono / S&S)

YONGSAN GARRISON, South Korea &#8212; The base community and its South Korean neighbors received what might be their favorite present of the holiday season Wednesday: a new overpass that will reduce both on-post and off-post traffic.

Minutes after a mid-morning ribbon-cutting ceremony attended by dozens of spectators and much of the U.S. military brass here, the overpass connecting Main Post and South Post was opened to bikers, pedestrians and drivers.

No longer will they have to sit in long lines at base gates, officials said. And they won&#8217;t have to flash their ID cards to get from one side of the post to the other.

The $7.9 million project, incorporating a heating system to prevent the overpass from freezing over during winter, was completed six months ahead of schedule.

The Corps, along with the Shinsung Engineering & Construction, took advantage of mild fall temperatures and a push by the Combined Forces Command to get the project done quickly, officials said.

Eleven months ago at the groundbreaking ceremony, the head of the South Korean contracting company promised to complete the project while keeping safety, quality and speed in mind.

After officials cut a ceremonial ribbon officially opening the overpass, a fire truck, military police cycle patrol and a pair of joggers crossed from South Post to Main Post.

The 30-ton fire truck was a reminder the overpass would be open to virtually any vehicle, officials said.

The new overpass will significantly reduce the rush hour traffic jams on a main Seoul street that passes between the two sides of Yongsan Garrison, officials said.