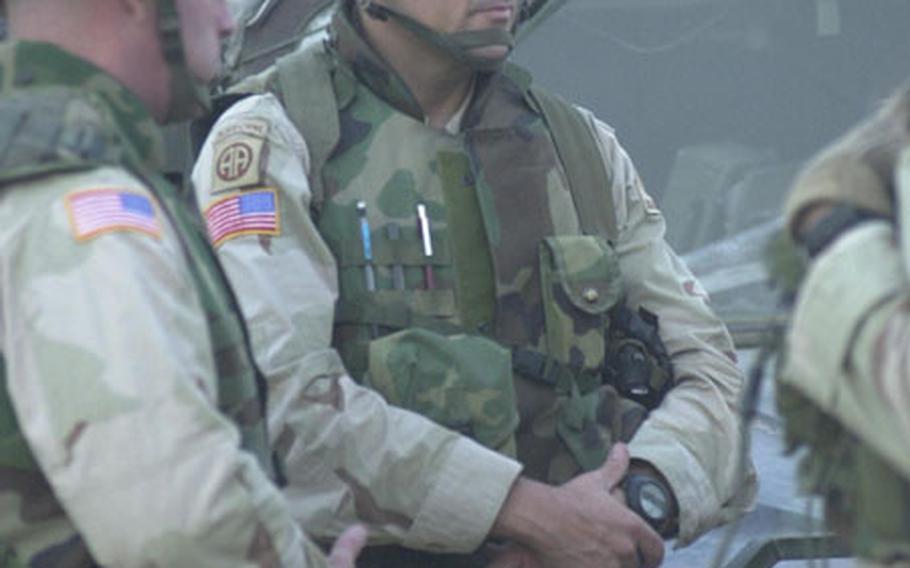 Col. Ralph O. Baker says on any given day, he may have meetings with community councils in the morning, try to recruit non-governmental agencies for public works programs in the afternoon, then conduct a raid at 2 a.m. Here he watches before dawn last Wednesday as battalion-size force conducts a raid south of Baghdad. (Terry Boyd / S&S)

Col. Ralph O. Baker says on any given day, he may have meetings with community councils in the morning, try to recruit non-governmental agencies for public works programs in the afternoon, then conduct a raid at 2 a.m. Here he watches before dawn last Wednesday as battalion-size force conducts a raid south of Baghdad. (Terry Boyd / S&S) 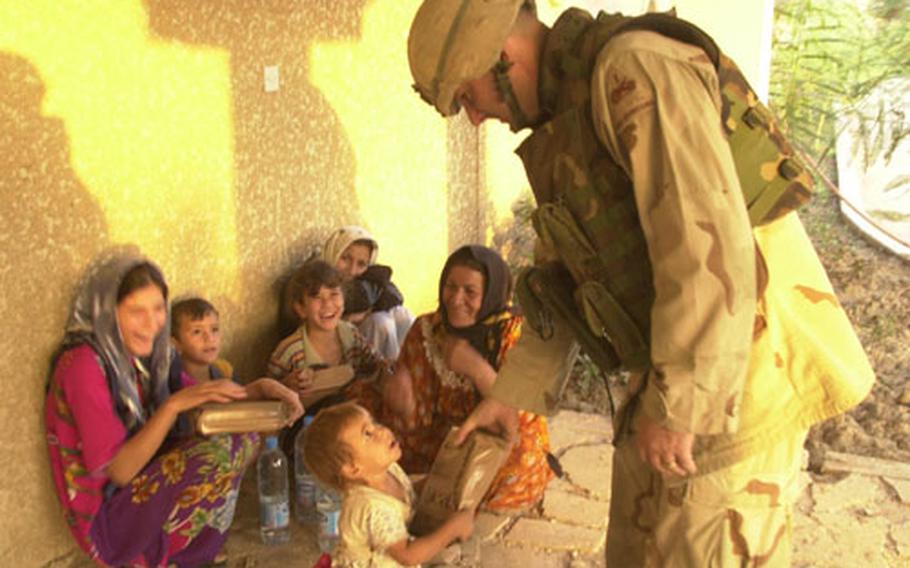 An Iraqi family watches a girl who seems hypnotized by 1st Sgt. Joe Proctor and all his equipment. First Armored Division officers stressed that soldiers use appropriate force during a raid last Wednesday. That turned out to be no problem as Iraqis caught up in the raid seemed to have no fear of soldiers such as Proctor, assigned to Company B, 2nd Battalion, 6th Infantry Regiment. (Terry Boyd / S&S)

BAGHDAD, Iraq &#8212; Col. Ralph O. Baker says he has enough soldiers to complete his mission of restoring stability in Iraq.

What Baker, with the 1st Armored Division, says he doesn&#8217;t have is enough intelligence.

The commander of the Baumholder, Germany-based 2nd Brigade is doing it himself.

In a little-noticed change, some conventional U.S. forces are taking on the nuanced, covert capabilities of civilian intelligence agencies and special operations commandos, such as running their own human-intelligence networks.

A heavy mechanized division out recruiting and running agents?

Intelligence spans all three of what American soldiers here are calling the &#8220;Three-Block War,&#8221; an allusion to duty days that include meeting with neighborhood advisory councils on one block, overseeing a public-works project on another block and fighting a gun battle on the third.

To keep the peace, soldiers have to get rid of the bad guys. But to get Iraqis&#8217; cooperation, they have to make the average person&#8217;s life better, 1st AD officers say. Hussein El-Bein, an American citizen who&#8217;s a translator for 2nd Brigade intelligence officers, says that many, if not most, Iraqis &#8220;wanted to leave the whole system, but they couldn&#8217;t.&#8221;

Saddam Hussein employed as many as 200,000 internal security officers, &#8220;one on top of another on top of another,&#8221; El-Bein said. That forced Iraqis into a survival mind-set, a mind-set that the U.S. can change by solving problems and by eliminating Saddam loyalists.

All 1st AD officers interviewed by Stars and Stripes agreed that the intelligence operations are hardly perfect, but getting better.

But the longer he&#8217;s here, and the more sources he develops, the more reliable information from people closer to the problem he&#8217;ll get, Rabena said. What&#8217;s clear is that American soldiers don&#8217;t have the language skills or the invisibility to blend in, to gather crucial intelligence themselves, said Baker. Only natives can do that.

So where do you find former generals to vet your intelligence? Rabena smiles and says, &#8220;Ah, networking. You can&#8217;t stand back and expect it to happen. You have to embrace people &#8230; go out and ask them if you can help them with something.&#8221;

That means cultivating a relationship with the imam at the largest mosque in Baghdad, a &#8220;politically reliable&#8221; cleric, to get out the pro-U.S. message to Friday prayers attracting 6,000 faithful on average, he said.

To make sure religious clerics in his sector&#8217;s mosques aren&#8217;t whipping up anti-American sentiment, he does &#8220;mosque monitoring,&#8221; sending translators to tape Friday sermons.

Rabena and others say they&#8217;ve seen a sea change in the way the average Iraqi views the military, and that&#8217;s translating into better cooperation. People don&#8217;t like outsiders coming into their neighborhoods and killing and wounding locals, the collateral damage from attacks against troops, he said.

That backlash brings in the sheik to report outsiders at midnight meetings in his neighborhood.

Bad intelligence can come back to haunt troops, and the 1st AD is working to lessen the resentment from the eight out of 10 raids that fail due to incorrect information. He doesn&#8217;t want the people affected by failed raids going on to attack U.S. forces, Baker said.

The goal is to do business more like cops in the United States, &#8220;where you detain people in a respectful way. Our soldiers have to treat [detainees] in an honorable and professional way, like the police, when they can,&#8221; Baker said.

Every day the United States succeeds, improving Iraqi lives and getting rid of bad guys, said Capt. Andrew Chenoweth, S-2 for the 2-6, &#8220;the harder it is for the old regime to keep support.&#8221;

What the media &#8212; fixated on the drama of the raids themselves &#8212; has missed is that the overall effort is working, Rabena said.

Local leaders come in at all hours, often waiting for him when he comes in from an all-night raid, &#8220;but the intel keeps flowing,&#8221; he says.

He gets so many walk-ins that he worries about reassuring tipsters his men are working through the intel. So he puts ads in Al-Bakan newspaper listing the names of all the people the 2-3 has taken into custody off tips.