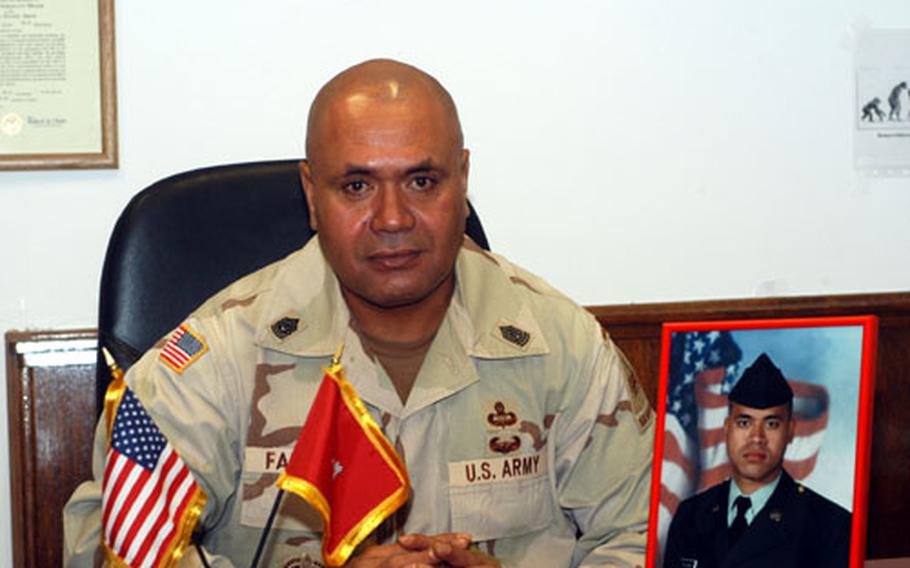 GIESSEN, Germany &#8212; When Jonathan Falaniko was training to be a combat engineer at Fort Leonard Wood, Mo., several sergeants made a point of stopping by to see the 20-year-old recruit.

They wanted to meet him and welcome him into the fold. Their chats were often casual, but formality figured into the mix as well. It had to be that way, because his father, who was in Iraq, would have it no other way.

Encouragement was one thing. Favoritism was something else.

&#8220;I realize that you get a lot of respect being the man you are,&#8221; Jonathan wrote in a July 24 letter to his dad, the command sergeant major of the 1st Armored Division Engineer Brigade.

He penned the note at 9:30 p.m., a precious time of the day for young recruits like Jonathan Falaniko.

In fact, the Army private did get to see his father in uniform &#8212; and in action, though it was ever so brief.

On the morning of Oct. 27, a month after Pvt. Jonathan Falaniko arrived in Iraq, a rocket-propelled grenade killed him just after he and several other engineers cleared two improvised explosive devices along a Baghdad road. The RPG, which pierced the engineers&#8217; cargo Humvee, wounded five other soldiers.

Command Sgt. Maj. Ioakimo Falaniko was in the division&#8217;s tactical operations center at the time of the attack, but didn&#8217;t know his son was on that particular mission. About an hour later, he knew that his son had been killed. Though they had met a couple of times since Jonathan&#8217;s arrival, neither was intimate with the other&#8217;s daily routine. Protocol, location and the pace of activity kept contact to a minimum.

The 27-year veteran escorted his son&#8217;s body back to the United States for burial at Arlington National Cemetery in Virginia. The service was attended by at least eight general officers and more than 20 sergeants major. Falaniko read excerpts from some of his son&#8217;s letters, written before Jonathan was assigned to Alpha Company, 70th Engineer Battalion at Fort Riley, Kan.

Falaniko is now back at his brigade headquarters in Giessen, Germany, but he plans to return to Iraq after Thanksgiving. His heart may be &#8220;broken,&#8221; he said, but his spirit remains intact.

Senior leaders up and down the chain of command have told him that isn&#8217;t necessary, offering to transfer him and his family to wherever they want to go. Falaniko knows they mean well, but he still wants to rejoin his unit.

Gravens wondered aloud Tuesday how he would handle such a loss. He referred to Falaniko as &#8220;an incredibly strong man &#8230; a pillar of strength.&#8221;

Jonathan Falaniko, an American Samoan born when his father was stationed in West Berlin, has been described as an exceptional and respectful young man.

When Jonathan was a 16-year-old volunteer, the youth center coordinator at Fort Leonard Wood entrusted him with tasks far beyond his years. When his older brother, Niko, emerged from a 3&#189;-week coma following a car accident in September 2001, Jonathan was the one who stayed at Fort Lewis, Wash., to help him. The rest of the family &#8212; including wife Maliana and daughters Adeline and Otilia &#8212; had to go to Germany, but Jonathan thought it was best to have a family member remain to help Niko while he recuperated.

Falaniko, the senior enlisted soldier for the roughly 4,500 engineers in and around Baghdad, was there for his son when the private flew into the Iraqi capital on Sept. 28. Bear hugs were exchanged, and at some point the son began to address the father as &#8220;sergeant major,&#8221; but not before he made the following pledge: &#8220;Dad, I will try my best not to disappoint you.&#8221;

Falaniko said he has heard that soldiers have taken into custody the man suspected of firing the RPG that killed his son and injured his five brothers in arms. The command sergeant major wants to look the man in the eye, but insisted he&#8217;ll let whatever process there is run its course.

There are no regrets, Falaniko said. War is hell for everybody.